+ How she scored perfect CGPA 7.0 from Botany dept.

Despite the torrents of stigmatization and victimisation that the Hijabites in Nigeria have been accosted with in recent times, they continue to break new grounds, record feats and success stories in all walks of life.

From the College of Medicine to Law School, female Muslims donning the Hijab have continued to relentlessly break records, thereby defeating the stereotypes naysayers have attached to them.

A quick search of available data shows that there are a number of Hijab-wearing Muslim ladies with sterling performances in the academia. However, the case of Ms Habeebah Olayinka Owolabi, 25, stands out among her contemporaries.

The unassuming and brilliant Habeebah did the unimaginable when she scored a perfect Cumulative Grade Point Average of 7.0, making her the Overall Best Graduating Masters Student at the Postgraduate School from the Department of Botany, Faculty of Sciences, University of Ibadan, Ibadan, Oyo State.

Making the announcement yesterday at the 2018/19 Convocation ceremony, the institution’s Vice Chancellor, Professor Abel Idowu Olayinka declared Ms Owolabi, an Hijab wearing Muslim lady, as the overall best among the graduating candidates of Masters’ Degree at this year’s Convocation.

In an exclusive interview with Muslim News, the Ibadan born Muslimah gave thanks to Almighty Allah for the feat, adding that, “It wouldn’t have been possible but for Allah. He (Allah) made it possible. I feel great especially for representing Islam well.”

Speaking on how she was able to secure a perfect CGPA of 7.0 despite challenges, she said, “Apart from the mercy of Allah as I couldn’t have done it without His support, I worked hard to score 70 marks and above in all the courses I took during the about two years programme, which included my research work (project).”

Ms Owolabi, who also graduated with a first class during her BSc degree programme in 2015/16 from the same department, appreciated her mentor, Professor Adeyemi Egunyomi for the motivation and encouragement.

According to her, My first class in 100 level was as a result of my Mentor’s motivation because he assured me then that if I can manage to have a first class, I will be able to transfer to Pharmacy at least. So Allah helped me and I worked hard but I wasn’t allowed to cross to Pharmacy. Since then he has always motivated me even till now.”

Speaking about distractions and her experience as a student adorning full Hijab, Ms Habeebah said, “I am someone who doesn’t get distracted since I don’t fully participate in school social activities. Well, Alhamdulillah for my department, I never faced any discrimination despite the fact that I use the (full) hijab.

“The only challenge I could point out was during my research work, when I was having some set backs before it was later rectified with the support of Allah. Luckily, I have a father as a supervisor; also, an amazing mother who I called my project partner and last but not the least, my husband in person of Engr. Daud Shittu. They were of immense help,” she added.

Muslim News findings revealed that the pride of Islam, Habeebah had in August 2019 got married to an amazing gentleman, Engr. Daud Shittu in an aqdu nikaah (marriage contract). The walimah (marriage banquet) is slated for December 28, 2019.

She berated the critics who say that the Hijab has nothing to do with academic excellence, stressing that, “I will say such people are hypocrites because it is these same people that will tell you ‘they have covered their brain’ if it is the other way round.

“I am always happy and overwhelmed whenever I hear Muslims, most especially hijabis record outstanding achievements. This really changes the perception of people towards the hijab.”

Habeebah, the third of five children and the first to earn a Master’s Degree, extolled her parents, Mr and Mrs Aliu Adisa Owolabi for their unflinching support, pointing out that without them, she could not have gone this far in life. 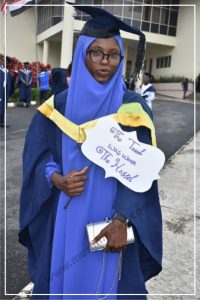 She said, though, life was tough because her background was humble, all along, she put in her best in whatever she did, stressing that hard work and faith in Allah were the secrets behind her success in life.

“But I must tell you my parents really supported me. At a point when they were getting tired, and there was no money, my mentor, Professor Egunyomi Adeyemi, a retired professor came in. He took up paying my school fees and helped me in other ways. Alhamdulillah, here I am today, I give all praises to God.”

Ms Owolabi revealed her plans to obtain a Ph.D form for her Ph.D in UI.