It was night like no other for Bollywood fans in Saudi Arabia as Salman Khan took to the stage in Riyadh of Friday night, bringing his brand of star power to the Riyadh stage.

The actor performed to a packed crowd, blending humour with hijinks at the International Arena in Boulevard, as he performed to the biggest hits of his Bollywood career as part of his Da-Bangg tour, with a little help from his celebrity friends, including Shilpa Shetty Kundra, brother-in-law Aayush Sharma, Saiee Manjrekar, Maneish Paul and others.

Prabhu Deva, Sohail Khan, Sunil Grover and Kamaal Khan were also in attendance, but Jacqueline Fernandez, who was supposed to take to the stage with Khan, was unable to fly to Saudi Arabia despite promises from the seasoned actor himself earlier at a press conference in the city.

For the uninitiated, Fernandez was stopped from leaving India due to her being part of an Enforcement Directorate probe into a money laundering case.

But all was forgiven and forgotten when the 55-year-old star took to the stage, dancing to some of his monster hits from his career-defining films such as ‘Maine Pyaar Kiya’, ‘Hum Aapke Hain Kaun’, ‘Mujhse Shaadi Karogi’, ‘Dabangg’ and more. Age was clearly just a number for Khan, who could give those half his age a run for their money as he danced with abandon with videos of his performances and screaming fans are peppered across social media, 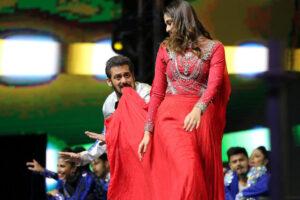 Shetty Kundra also returned to stage after a nine-year hiatus, finding her way back into the spotlight since the arrest and bail of her husband Raj Kundra who has been linked to a pornography racket in India.

Before the show, in a media address in Riyadh Shetty Kundra spoke of her times on-screen with Khan. “I started my career in show business with Salman, and today I am doing my first live show after nine years. I am so happy to be a part of Riyadh season, it really is like homecoming for me.”

While Khan delivered on his promise with a night to remember, he did leave a little memento behind as well, with his hand imprint that have been added to a Wall of Fame in Riyadh.