NBC’s Ban of “This is Nigeria”: Double Standards Per Excellence By Rasheed Abubakar

Remember “This is Nigeria” by Falz the Badh Guy? It is the controversial song that featured those shaku-shaku girls dancing in the Hijab.

The National Broadcasting Commission (NBC) just banned the song. The agency also slammed a N100,000 fine on a popular Jos radio station for airing it. The fine must be paid within two weeks, else the station will be made to suffer stiffer sanctions.

To my surprise however,“This is Nigeria” was not banned because Muslim netizens protested against Falz’s offensive video of the song, and the dancing of its choreographers of shaku-shaku with the Hijab. 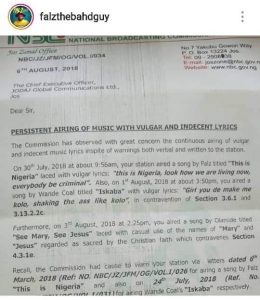 The regulatory body said the song is “laced with vulgar lyrics”, especially the part where the singer sang: “This is Nigeria, look how we living now, EVERYBODY BE CRIMINAL.”

Interestingly, the audio of the song has been declared “unfit for radio” by the agency since March, but the singer – a law graduate – went ahead to shoot the controversial video of the song and released it on YouTube in May, 2018.

Many analysts said this was also the reason the artiste, a son of human rights activist Femi Falana (SAN), didn’t present the said music video for licensing and rating to the National Film and Video Censors Board (NFVCB), Abuja before he released it to the public, as claimed by the Board Director in an interview that has since gone viral.

The circular, which was handed to the Jos radio station yesterday, Wednesday, August 8, for violating the rules of the NBC, also banned Olamide’s song; “See Mary, See Jesus”. The circular says Mary and Jesus are regarded as sacred by the Christian faith and as such, Olamide’s song contravenes Section 4.3.1e of the Nigerian Broadcasting Code.

Wait a minute! Did you hear that? Olamide’s song was banned because it portrayed the symbols of Christianity; Mary and Jesus (May Allah be pleased with them) in a slovenly manner.

Was this not the same reason the Muslims wanted “This is Nigeria” banned? Is the Hijab not considered as sacred by the agency, as it considered Jesus and Mary sacred? This is indeed a sterling example of double standards and injustice the Muslims have always been complaining about.

The Hijab is a compulsory apparel of honour that must not be dragged into the mud, all in the name of entertainment. However, to the NBC or NFVCB, it doesn’t matter if it was ridiculed by Falz and his dancers, but it does to Christianity in the case of Olamide’s song, “See Mary, See Jesus”.

Ironically, the Christians didn’t express any grievances with Olamide’s song before their interest was served by its ban. Why was the interest of the Muslims not also protected by the agency? Was this not the same reason human rights activist Prof Lakin Akintola was booed by some Muslims for giving Falz a 7-day ultimatum to redo the music video or face the wrath of the law? Indeed, “This is Nigeria”!

Already, the song has gone viral, but what is important is that the agency took a bold step to ban it. What is however worrisome is that the ban was not in the interest of the Muslims, who had earlier rejected the offensive video.

This is an indication that the unity of Muslims is not negotiatiable if they really want their voices to be heard in fighting against the double standards and injustice being meted to them in their fatherland.

READ ALSO...  Insulting Religion in the Name of Art; Between Beverly Osu and Falz The Bahd Guy

– Rasheed Abubakar is a journalist and the author of “Hijab and the Nigerian Press.” Email: rawshield123@gmail.