Meet Alhaji Ganiyu Sopeyin, nominee for the Lagos Man of the Year 2018 Award

“He is a man of the people”, “He is a good listener”, “He is the proposer of the 4 Fs of Management: Firmness, Focus, Fairness and Friendliness”, “He has assisted so many people into teaching jobs in SUBEB”; these are some of the attributes on the lips of many who rally support for Alhaji (Dr) Ganiyu Oluremi Sopeyin, the Executive Chairman of Lagos State Universal Basic Education Board (SUBEB). 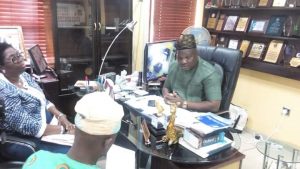 Alhaji Sopeyin, B.Ed (Hons), M.Ed, Ph.D, a devout Muslim, is yet another nominee for the prestigious Lagos Man of the Year 2018 Award, alongside 9 other achievers in the public and private sectors who have also done the state proud in their respective fields.

His teeming supporters have vowed to vote for the man they described as “the father of present day Basic Education in the Centre of Excellence”, when the voting starts on Monday, September 3 till it ends on Sunday, September 9, 2018.

The coming of Dr Sopeyin into Lagos SUBEB – the body in charge of primary education in Lagos State – in 2015 has brought development into the education sector. The feats achieved so far, with so many testimonies from beneficiaries, were motivated by the Ambode administration’s love for education, which is considered to be the bedrock of growth and national development.

The efforts of Mr Akinwunmi Ambode’s government to improve the standard of education in Lagos through the State Universal Basic Education Board yielded positive results in 2016, when Dr Ganiyu Oluremi Sopeyin emerged the Best Performing SUBEB Chairman in the South West.

Speaking on the achievement, the man in charge, Dr Ganiyu Oluremi Sopeyin reaffirmed the commitment of the Ambode-led government to further taking basic education in the State to enviable heights.

He attributed the success being achieved at the education sector in recent times to the passion and zeal of the present administration to fulfil and deliver on its electioneering promises, adding that education in Lagos State would achieve greater quality and competitive advantage as promised by the current administration.

READ ALSO...  Sheikh (Dr) Ali Pantami is the first runner-up in the Top 5 Nigerian Muslim Personalities of the Year 2019

Under Dr Sopeyin’s watch, Lagos SUBEB was adjudged the best in the entire South West Nigeria. Teachers no longer wait to “get rewarded in heaven” in Lagos, as the Best Overall Head Teacher & Teachers in Primary Schools are rewarded yearly with cars, amongst other notable prizes.

Deservedly, a Muslim sister in Hijab, Kafayah Omowunmi Ajape and another Muslim brother, NASFAT Youth Leader Ustadh Ismail Abiodun Ibrahim won the Best Teacher category in 2016 and 2017 respectively. This gesture has motivated teachers to put in more efforts towards discharging their duties.

In December 2017, Lagos State – under the auspices of SUBEB – established 6 additional primary schools with basic infrastructural facilities in addition to the existing 1010, making the current number of Lagos primary schools 1016. The newly established schools are:

Dr Ganiyu Oluremi Sopeyin said the development was in line with the Ambode administration’s policy on education, to make qualitative and quantitative education available to the teeming youth population of school age in Lagos state.

Muslim News gathered that under the Dr Sopeyin-led SUBEB, there is continuous training and retraining of teachers in primary schools to equip them with modern teaching techniques. The move, we can reliably confirm, is to ensure that teachers in Lagos primary schools give out only their best.

Dr Sopeyin recently made a disclosure where he expressed the State’s readiness to start specialised teaching in its primary schools from the 2018/2019 academic session.

He said the training, initiated by the Deputy Governor, Dr Idiat Adebule, will enable teachers in the state-owned primary schools to operate like their secondary school colleagues. Lagos will be the first State to start specialised teaching in its basic schools in Nigeria.

Investigations revealed that Muslims in SUBEB are allowed to perform Solat at the right times, courtesy of Dr Sopeyin’s Islam-friendly policies, which encourage them to be close to their Creator (Allah) and still be dutiful at their jobs.

A Muslim teacher who preferred to remain anonymous itemised some of the good things Dr Sopeyin has done for Muslims, a gesture he has extended to people of other faiths.

According to the source, “Dr Sopeyin usually organises Qur’an competitions for primary schools pupils, rewards the winners, and encourages all the young contestants. He is indeed a lover of the Qur’an. He also organises annual Ramadan lectures for teachers, pupils and SUBEB staff. He also organises Islamic quizzes for Muslim pupils, and I know him to be a conscious Muslim. He doesn’t discriminate against other religions, despite being a devout Muslim”.

Another source said: “No matter your religious affiliation, once you are qualified for a teaching job, you will be employed. I know so many Muslims and Christians he has assisted for teaching jobs in SUBEB. I would have voted for all the Muslim nominees because they all deserve the award, but based on the instruction, I can only vote for one person. Personally, Dr Sopeyin has contributed his own quota and he deserves to win this prestigious award.”

Dr Sopeyin is a fellow and member of various associations of high repute. He was at a time the Head of the Monitoring and Investigative Unit of the Lagos State Ministry of Education, and a Director of Personnel Management.

He has attended a number of courses, trainings, conferences and seminars in the area of Education and Educational Management, amongst which is the Executive Education Course for Senior Executives by the Harvard Kennedy School. He is an author of several peer reviewed papers and books.

Dr Sopeyin is said to be a man of integrity and industry, with unbiased love for both Muslims and non-Muslims. Those who know him described him as a humble person and a man of discipline.

“Many primary schools teachers who are lazy are forced to work hard because he puts in place strong monitoring teams to inspect teachers frequently. In fact, no week ends without monitoring teams visiting schools.

“Many schools were built or rehabilitated during his tenure, good staff welfare was ensured, open door policy was the norm, staff promotion was conducted promptly; I can just go on and on”, one of the teachers explained, citing reasons Dr Sopeyin deserves to win the 2018 Lagos Man of the Year Award.