Thrills as Chief Imam of Lagos Receives Staff of Office

‘What the Staff of Office symbolises’ – Chief Imam

– Tinubu, Aregbe, Yemisi-Coker, others, get titles

The historic event held at the Tafawa Balewa Square (TBS) Complex, Lagos, and also witnessed the conferment of Islamic chieftaincy titles on no fewer than 30 Muslim personalities for their contributions to Islam in Lagos State. 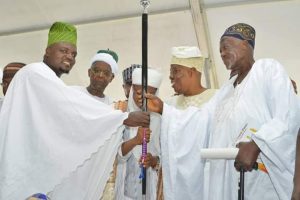 The former Governor of Lagos, Bola Ahmed Tinubu and his serving counterpart in Osun State, Ogbeni Rauf Aregbesola were conferred with the Asiwaju Adinni of Lagos and Waziri Adinni of Lagos titles respectively.

The Publisher and Editor-in-Chief of Al-Islam, a quarterly Islamic publication, Alhaji AbdulBaqee Yemisi-Coker was also conferred with the title of Kakaki Adinni of Lagos.

The Staff of Office was presented to the Chief Imam by the Baba Adinni of Lagos, Sheikh Afeez Abou, who was accompanied by members of the Lagos Central Mosque executive committee.

“It is a Staff of Authority”, the new Chief Imam of Lagos, Sheikh Abou-Nolla earlier told Muslim News in an exclusive interview, noting that: “It is to formally officialise the Office of the Chief Imam.”

In his words, “the Turbanning Ceremony has been done in December 2017. It is the most important event which heralded my emergence as the Chief Imam. Today’s event is only meant to formalise the office of the Chief Imam.

There was a resounding applause of ‘Allahu Akbar’ from the crowd which witnessed the presentation, as the Chief Imam thereafter paid homage to the Ulamah (Muslim scholars) who attended the event.

The 43 year old graduate of Electrical-Electronics Engineering from the prestigious University of Ilorin is the youngest person and first graduate to occupy the exalted position of Chief Imam of Lagos, Muslim News learnt.

Sheikh Abou-Nolla, who until now was the Deputy Imam of Ike-Oluwa Mosque, attributed his appointment to Allah, saying that: “Leadership is a big responsibility, and may Allah in His infinite mercy support us to be able to deliver to our people that we are leading them with, which is Islam”