Prof Aderinto, who doubles as the Chairman, Court of Governors of the school, had told journalists on Monday that despite meeting with the Forum on Saturday, he was shocked and disappointed that the parents could be frustrating efforts of the management at restoring the glory of the school.

Prof Aderinto, who made the bold claim of being a “proud Muslim”, argued that ISI is a private school, stressing that: “University of Ibadan does not fund it. It is funded by the fees collected. It is unfortunate that this is coming up now.”

But the chairman of the Forum, Alhaji AbdurRahman Balogun swiftly responded in a phone conversation with Muslim News on Tuesday that he was shocked that the Professor did not disclose the outcome of the meeting to the press.

Alhajis Balogun also said he was dismayed but not surprised that someone who claims to be a Muslim could make such derogatory remarks about the use of the Hijab, adding that: “Some of them, in their homes, their wives and daughters are not adorning the Hijab. They don’t know the importance of the Hijab in Islam.” 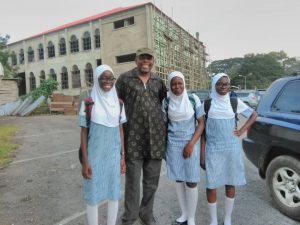 Clearing the air on the outcome of the meeting, Alhaji Balogun said: “After writing the management of the school on Friday, where we expressed our displeasure over the refusal of the school Principal to allow our wards to comply with the dictates of their religion, they called us for a meeting which we graciously honoured on Saturday.

“Surprisingly, at the meeting, they told us to make another request, which shall be granted. They said the Hijab on school uniform is a no-go area but we told them we stand on the Hijab. That is the main reason why we honoured the meeting in the first instance”, he stated.

The veteran journalist maintained that there is no where in the school’s regulations where the use of the Hijab on the school unform is prohibited.

“We challenge them to quote the school regulations that prohibit the Hijab. We are law abiding citizens and the Nigerian constitution guarantees the fundamental rights of our wards to use the Hijab on their school uniforms. 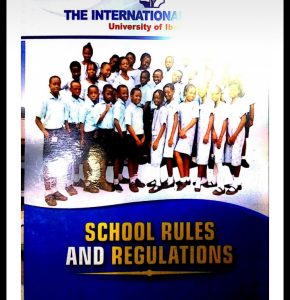 “The school regulations, especially section 7, sub-section i-vi under the tag: ‘uniform and appearance’ is explicit enough for anyone to understand. There is no where the use of the Hijab is prohibited. Let them show us where it is written.

“There are two Court of Appeal judgments affirming that the use of the hijab is a fundamental right in Nigeria under the 1999 Constitution of the Federal Republic of Nigeria, hence the management of the institution should desist from denying our wards the right to use the Hijab in the school”.

Alhaji Balogun said the argument that the school is not run by government should not be used as justification to violate the rights of the students who want to obey their Lord.

“It is not true that the UI International School is a private school. Let’s even assume it is, that is not a justification to violate the rights of the students. Besides, there is no rule in their regulations that specifically prohibits the use of the Hijab. If it does exist, then the relevant constitutional provision, which is superior, must be respected.”

The school has been closed down indefinitely by the management, following its refusal to allow the students use the Hijab on their school uniforms.

Muslim News investigations revealed that the morning assembly, which was supposed to commence around 7.30 am and end at 8.00 am yesterday could not hold due to the presence of the Hijab-wearing students and their parents, who were there to monitor the situation.

The classes, expected to commence by 8am, were also cancelled as the entrances of the classes were put under lock and key by the school management against the students.

Some of the students and teachers were seen discussing the issue at the entrances of their classes.

The students, who were roaming about the school premises, told our correspondent that they were ready to be taught but the classes had been shut.

The classes remained locked when our correspondent left the school around 11 am on Monday, November 12. 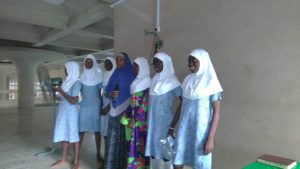 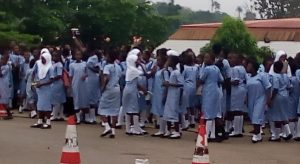 As at the time of filing this report today, November 13, more than 100 female students are adorned in simple white Hijabs on the school premises. Classes are open but teachers have boycotted the classes and students are unengaged.

Several Muslim organisations have joined the Forum to condemn the continuous victimisation over the Hijab in many schools in Southwest Nigeria.