The clock for the 2019 general elections is ticking fast. In less than 100 days, the elections would have been won and lost. The coast is now clear for no fewer than 30 presidential candidates, but the battle for the Aso Rock Villa is between the incumbent President Muhammadu Buhari of the ruling All Progressives Congress (APC) and Alhaji Atiku Abubakar of the opposition Peoples Democratic Party (PDP).

Interestingly, the duo are Muslims and of the same Northern and Fulani extraction. While Buhari, 75 is from Daura, Kastina, a State with a population of about 8 million, Atiku, 72, hails from Jada in Adamawa, with a population of over 3 million according to the National Population Commission.

The Northwest geopolitical zone, which includes the President’s State, has the largest number of registered voters (18 million plus), and there are all indications that the 2.5 million-strong electorate from Katsina will vote en-masse for Buhari’s second term in office bid to become a success.

This was further corroborated by the Governor of the State, Aminu Masari, who declared total support for Buhari, while reiterating that 100% of Katsina voters are solidly behind the President.

Unlike Katsina, the 2 million votes in Adamawa State will be divided between Atiku and Buhari, Muslim News’ findings revealed, despite the Governor, Jibrilla Bindow’s unwavering support for the incumbent President.

The Governor, while recently endorsing President Buhari, declared that Adamawa may be Atiku’s home but it is an APC State. He said as an APC governor, he has no intention of supporting or canvassing support for any presidential candidate outside the APC.

The popularity of their running mates in other States of the federation will not doubt have significant effects on the forthcoming presidential election, slated for Saturday, February 16 as released by INEC.

It is important to note that the Southwest region has the second largest number of registered voters of the six geopolitical zones – over 14 million – and interestingly, all the 6 States – Oyo, Ogun, Osun, Ekiti, Ondo and Lagos – are governed by the ruling APC.

The incumbent Vice President, Prof Yemi Osibanjo will also use his office as a Senior Pastor to canvass for votes for his President-boss and himself from the Church, especially the Redeemed Christian Church of God (RCCG), the biggest Christian denomination in Nigeria.

The emergence of former Anambra State Governor, Peter Obi as Atiku’s running mate came as a surprise to many, including some party elders in the South East, led by former Minister of Aviation, Osita Chidoka, who immediately called for Obi’s rejection.

However, the Atiku Campaign Organisation believed that Peter Obi will use his leadership skills, having handled several political and managerial roles, to help bring back prosperity to the country. 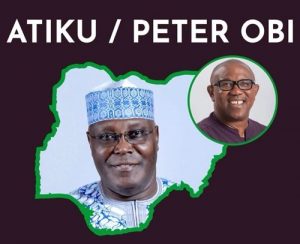 He would nothwistanding do every thing possible to mobilise his people to vote for Atiku Abubakar “in the interest of the Igbo nation and Nigerians at large”.

The eligible Nigerian electorate, including those who have also called for the murder of Fulanis, would have no choice than to cast their votes for either of the two candidates and ultimately, toss the power to govern Nigeria, a country of about 195 million citizens, into the laps of a Northern Fulani till 2023.