In what seems to be like the historic Ides of March, the souls of the national Ameer and two other principal elders of the Tabligh Jamaat Nigeria were taken in a fatal road accident on Sunday, 9th of December, 2018.

The trio, alongside other elders of the Da’wah movement were involved in the fated auto accident along the Oyo/Ogbomosho express road on their way from Ilorin, the Kwara State capital, where they went for a quarterly religious deliberation.

Other elders in the entourage, Muslim News reliably gathered, sustained different levels of injury while the driver escaped unscathed. 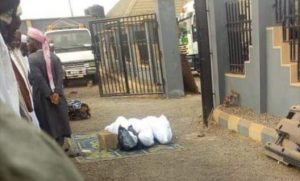 The cause of the accident, which claimed the life of the 89 year old leader of one of the biggest global Da’wah groups in Nigeria could not be immediately ascertained as at the time of filing this report.

Imam Qasim Akinsola, who broke the news on Facebook, wrote: “It will be recalled that the Amir gave the comprehensive concluding Dua at the just concluded Ogun State Ijtima’h held on Saturday, December 1, 2018 in Abeokuta.

“The Amir will be remembered for his selflessness and Da’wah efforts. He travelled far and wide, both locally and internationally, for numerous Da’wah activities.”

The Ameer was generally believed to be among the first set of people who embraced the new da’wwah movement far back in 1963.

While other pioneers backed out of the movement, he remained resolute which eventually earned him the ameer position.

Hajj Yishau, as was popularly called hailed from Ibadan and was also believed to have studied under the tutelage of the late Sheikh Adam Al-Ilory.

He will be remembered for his simplicity and penchant for reciting Suratul Qiyaama when leading solat.

He was a lover of sunnah and da’wwah activities. His last public appearance was the penultimate Sunday at the Ogun State Ijtima’h where he gave the comprehensive concluding dua.