The Aqsa Day art exhibition is a potent tool in countering the false narratives about the age-long Israeli-Palestinian crisis in the pro-Zionist mainstream media. Rasheed Abubakar writes…

For more than a decade, thousands of Nigerian Muslims and rights activists have regularly converged at the National Stadium, Surulere, Southwest Nigeria for a yearly event tagged Aqsa Day.

An initiative of Muslim Awareness International, Aqsa Day is Nigeria’s biggest annual solidarity gathering, which is meant to create awareness about the plights of Palestinians living under Israeli occupation in occupied Palestine.

Prominent Muslim scholars, foreign affairs analysts and human rights activists such as Prof Charles Dokubo, Sheikh AbdulFatai Thani, Dr Adelaja Odukoya, Sheikh DhikruLlahi Shafi’i, Dr Dele Ashiru, Abu Umar Al-Faruq and a host of others have delivered powerful speeches on the injustices of the Western world towards the people of Palestine and their liberation.

But unknown to some of the people who grace the annual events, the art exhibition centre of Aqsa Day is yet another potent tool in countering the false narratives about the Palestinian crisis, an issue which has garnered decades-long global attention, and is reminiscent of South Africa’s anti-apartheid struggle, which is closer home to Nigeria.

The Aqsa Day art exhibition stand, usually located at the side-way to the main venue, is a 12 by 24 ft tent that houses rare audio-visual materials that provide better perspective and understanding of events and situations in Palestine. 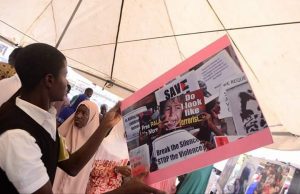 Muslim News’ findings however revealed that only a third of the thousands of Aqsa Day attendees visit the exhibition centre during the yearly event.

At the 2018 Aqsa Day edition held at the same venue on November 20, 2018, visitors to the art exhibition stand included some parents and their children, teachers and their students, University students and professionals.

When Muslim News visited the tent, MAI personnel were seen providing answers to the visitors’ questions and enquiries, as the guest speaker, Dr Dele Ashiru of the University of Lagos addressed the main audience on the topic: ‘From owners to refugees: Why the Palestinian struggle continues’. 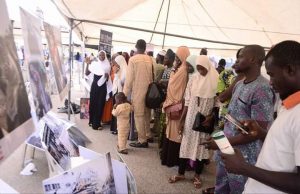 The feedbacks, we reliably gathered, further gave the participants an on-the-spot insight into the struggle for liberation and the need for the world to rally round the Palestinians.

The pictures of demolished homes in the West Bank troubled some of the visitors, who roundly condemned the western world for allowing the Israeli soldiers maltreat the Palestinians on their land. 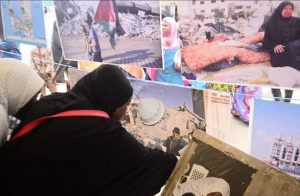 “How would a stranger come to my house and vandalise my home? Where does he want me to go? I will rather defend my land, even if I am going to die in the process”, Ibidunmoye Khaozar lamented as she called on the Muslim world to assist the Palestinians over the injustices of the Israeli usurpers.

The football legend, Cristiano Ronaldo’s picture with some Palestinian representatives however excited some of the students who came with their school administrators.

Mr Alatise, a school administrator disclosed that the exhibition is one of the reasons he brought his pupils for the annual event. 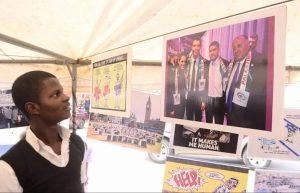 “First, we want to be serious with their education. It is a privilege to study in a serene environment, compared to what the Palestinian children witness on a daily basis. Second, we want them to emulate Ronaldo beyond football, and take after his philanthropy and lofty ideals.”

The Head, Human Resources of Muslim Awareness International, Mr AbdulAzeez Adenle said the exhibition centre at Aqsa Day is a platform for providing information on events, situations and plights of the oppressed Muslims around the globe.

“A picture can say more than a thousand words. We have therefore decided at the Muslim Awareness International to utilise such informative and educative means to reach out to the public at events such as the Aqsa Day”, Adenle said.

Adenle also spoke on MAI’s intention with the exhibition in an exclusive chat with Muslim News. He said: “We want to present the stories of Muslims in need of our support in a way that can be understood by all; men and women, old and young. 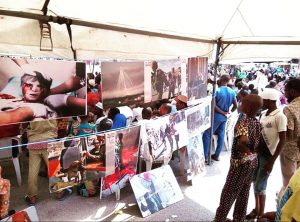 “The exhibition gives multiple sides of the stories and also puts a face to the words that have been written. People will not only have sympathy but also empathise with the victims of oppression from rogue regimes, unrepentant occupiers, war criminals and natural disasters.”

The activities of the exhibition centre at Aqsa Day have not enjoyed special reviews from both local and international media, which have, over the years, been covering the event, which is Nigeria’s biggest awareness programme for the Palestinians.

Adenle said: “The images we exhibited are not used by the Nigerian media because they tell a different story from the narrative they sell to their viewers/readers about the Israeli/Palestinian crisis. Nigerian media are extensions of the western mainstream media. Their lies and their bias would become apparent if they show our images to the world.

“We have observed that news and images of events that do not further their biased agenda are completely ignored. It doesn’t end at the pictorial blackout, we are also fighting to correct the misinformation and misrepresentation of what the program stands for in the media. Most times, the media change the narrative away from what we intend to achieve with Aqsa Day.

“The exhibition therefore provides an alternative platform for information on global events”, he said. 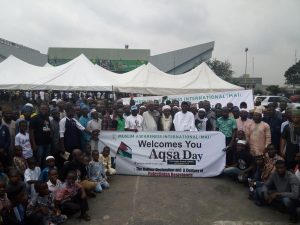 Muslim News learnt that a multimedia exhibition centre is one of the future projects of MAI, which is planned to be accessible by people every day, so they can be further informed and educated, not only on Palestine but also about the untold stories of the oppressed, victims of persecution, iconic heritage sites and victories of the steadfast.