The Lagos State Muslim Community (LSMC) has set agenda for Lagos governorship candidates in the forthcoming gubernatorial elections, which have been slated for Saturday, March 2, 2019.

The President of the LSMC, Professor Tajudeen Gbadamosi listed the demands at the interactive session with the 2019 governorship candidates of Lagos State at the Lagos Central Mosque, Lagos, Southwest Nigeria today, Monday, January 7. 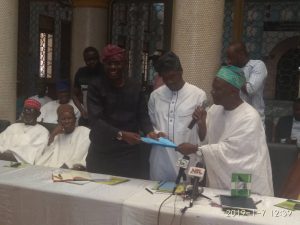 During the morning session, which lasted for two hours, Prof. Gbadamosi called for good governance inspired by the fear of God and pursuing policies that are people-oriented.

According to him, management of human and material resources should be the cardinal principle of the people’s government.

“We hereby appeal to any incoming government irrespective of its political affiliation or identity to imbibe the culture of fairness and equity in the distribution of the state’s resources, such as political and board appointments, scholarships, markets, land and house allocations, employment opportunities and admission into all state institutions of learning”. 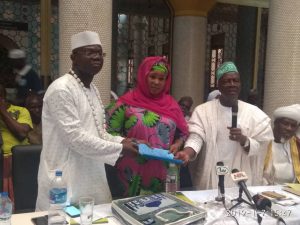 Muslim News’ findings revealed that the candidate of the leading opposition party, People’s Democratic Party (PDP), Mr Jimi Agbaje and his running mate, will grace the second phase of the interactive session slated for Tuesday, January 15, 2019.

Below are the excerpts of the first section of the 14-page, 3088-word LSMC demands from the Lagos governorship candidates:

The Muslim community of Lagos state is the umbrella body of Muslims in the state with the sole aim of promoting understanding and co-operation among its members and congregations.

As a community, our policy thrust and direction is to ensure peace and harmonious living among Muslims and non-Muslims alike; and, to equally advocate for justice and equity in the distribution of the state resources to enhance the socio-economic well-being of Lagos state residents.

Thus, we hereby present the following agenda, as matter of interest to various political aspirants in Lagos State and Nigeria at large.

Concern about good governance inspired by the fear of God, pursuing policies that are people-oriented and management of human and material resources should be the cardinal principle of the people’s government. We hereby appeal to any incoming government irrespective of its politics affiliation or identity to imbibe the culture of fairness and equity in the distribution of the state’s resources such as, political and board appointments, scholarships, markets, lands and houses allocation, employment opportunities and admission into all state’s institution of learning. This will definitely engender sustainable development in the State.

i. MULTI-RELIGIOUS STATE AND MUSLIMS:

States matters should be handled with the recognition that the state is multi-religious state, and thus, government activities, appointment and share of benefit to the citizen must REFLECT this fact at all time. Current imbalances should be corrected.

The State Muslim Pilgrims Welfare Board should be reconstituted in consultation with the Grand Chief Imam of Lagos State and President of Muslim Community of Lagos State; The Board should be allowed to function as a statutory body. It also worthy to note here that, unlike previous government, the outgoing administration did not appoint a Special Assistant on Religion (Islam), unlike our Christian counterpart. We plead that this imbalance should be corrected.

State Amir-Ul-Hajj Team should be composed of respectable Muslim Leaders and appointed in consultation with the President of Muslim Community and Grand Chief Imam of Lagos state.

The Muslim Community established Abari and Okesuna burial grounds later took over by the government. This was initially a welcome development even though those cemeteries are full to the brims they are now unkept and unsafe without good layout for accessibility. There should be redevelopment and new cemeteries are urgently needed as the space in the available ones has been over exhausted.

The Muslims in Lagos State observes the alarming rate individual has turns house into burial ground. This may disturb future development in the State, especially when most towns in the State are rising to mega cities. The Muslims in Lagos State implored any aspirant that will emerge as the Governor in the State to consider some portions of lands to each division to serve as graveyard. This will not only serve as revenue to the state but also abide by with the commandments of God.

The Lagos Muslim Community acquired vast parcel of land for its praying ground since the colonial day is where the present Military Edifice Dodan Barracks now situate was fully taken over by the Military Era when it became its seat of power at an initial request for some portion by sir, Tafawa Balewa is hereby requested to be fully return to the Muslim Community to serve the purpose it was initially serving for justice and equity to prevail in the land as such detrimentally occurrence should not go unaddressed by any meaningful government.

vii. EMPLOYMENT OPPORTUNITIES: The rate of unemployment in the country is so alarming that most of our university graduates are roaming the streets in search for job. Hence, we implore any prospective leader in Lagos State to ensure that equal opportunity is given to all and sundry, irrespective of religion or tradition;

The Agric YES project should be more focus to improve employments in the State at Epe, Ikorodu and Badagry where enough Agricultural arable lands are still available.

The State is more congesting in term of number of car movements on the roads. This is causing delay in Government and private sectors activities. The Muslims in Lagos prays any favoured candidate to consider provision of railway link across the 5 divisions in the State as matter of urgency to enhance productivity in the State.

x. WATERWAYS TRANSPORTATION: Southern part of Lagos State is blessed with waterways hence water ways transportation should be enhanced to help in the decongestion of traffic in the mainland.

xi. FREEDOM OF RELIGION AND WORSHIP:

In accordance with the constitution and national policy of education, a very clear policy must be made and enforced on freedom of religion and worship. There should be no religious discrimination or harassment in our public schools.
a. Religious devotions should respect all, and must be encourage on school’s morning assembly.

b. Morning assembly should be made equal days for Muslims and Christians
c. Officially, all schools must close at 12:00noon on Friday to enable Muslim students and teachers attend Jumat service as this will help in religious moral building of the societies.

d. HIJAB (Islamic Head-tie) must be allowed for willing Muslims students and pupils. However, this must conform with the school standard and adopted school uniform, More importantly, as we are still waiting for the supreme court judgment, we appreciate the State Government decision to uphold the Appeal Court ruling on HIJAB,but not yet implemented in schools as the tutor generals refused to pass on the circular containing the implementation.

NB: The Hijab issue might be major criteria among others for supporting any political party seeking the Muslims votes.

e. Equal opportunities of practice of religion by pupils, student and staff in all state institution.