– ‘We’ll rather stand with Palestine than host the championship’

Millions of Malaysians have hailed the country’s Prime Minister, Mahathir Mohamed for banning Israeli athletes, who are expected to participate at the 2019 World Para Swimming Championships later this year.

The show of love and affection for the 93 year old leader of the mainly Muslim country comes barely a day after the International Paralympic Committee (IPC) stripped Malaysia of its hosting right of the sporting event, initially slated for July 29-August 4, 2019.

Muslim News learnt that the event, which is expected to attract athletes from 70 countries, is a qualifying competition for the 2020 Tokyo Paralympics.

Many who expressed their views on social media said the ban on Israeli delegates was a welcome development.

They also chastised the IPC for withdrawing Malaysia’s right to host the championship, saying they will rather stand with the oppressed Palestinians than host the Championship with Israeli athletes in attendance.

Earlier, Malaysia’s Minister of Youth and Sports, Syed Saddiq Syed Abdul Rahman had issued a strong statement where he said the country stood by its decision to bar Israeli athletes.

“If hosting an international sporting event is more important than standing up for our Palestinian brothers and sisters who get murdered, maimed and tortured by the Netanyahu regime, that means Malaysia has truly loss its moral compass”, he said, justifying the ban against the apartheid Israeli nation.”

See some of their reactions below:

Adib Dan Aqilah said: I’m Malaysian and we don’t care about this championships. We only care about humanity. #StandWithPalestine #Proudtobemalaysian. 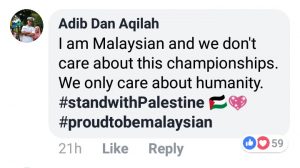 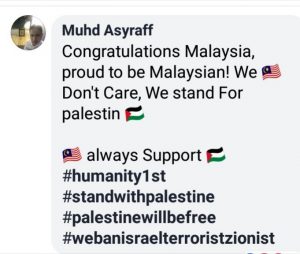 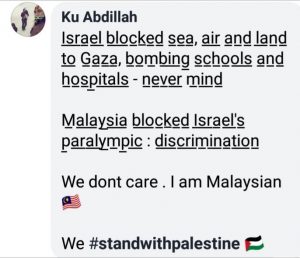 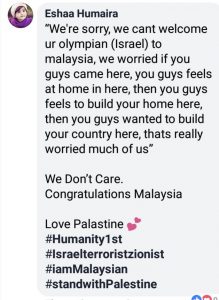 MSyafiq Abdul said: Being able to participate in sporting event is a privilege. And for many events, Israel has enjoyed that privilege. Whereas, the Palestinian has been oppressed from even having their basic needs! I am from Malaysia and I am proud of my country’s firm stance on this. 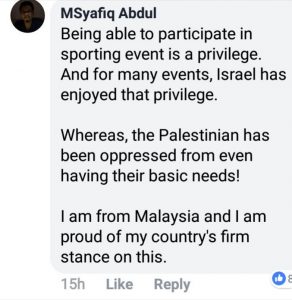 I believe aside from our different political views, most of us will agree with Syed Saddiq this time. I also hope that regardless if a new venue are to be picked later, Malaysia will continue to support by not sending our team to the championship. It’s a shame for our para team, but I guess we should take the high ground and stand with Palestine.