In the last three years of his administration, President Muhammadu Buhari has met with different religious leaders, from both Islam and Christianity, including the traditional leaders, on several occasions for different reasons.

This report by Muslim News, Nigeria’s most authoritative Muslim newspaper, however focuses on some of the speculations that greeted the visitations of Muslim Ulamah (scholars) to President Buhari on the social media, with the intent of setting the records straight and x-raying the influence their support for him will have on the forthcoming presidential election slated for this Saturday.

For instance, when in January 2018, President Muhammadu Buhari received Sheikh (Dr) Qaribullah Nasiru Kabara, the leader of the Qadiriyyah group in Africa, some Nigerians quickly rushed to the social media to tag the President a Sufi, one of the most popular Islamic movements in Africa, with a large and fast-increasing followership in Nigeria.

While the arguments over that incident kept going back and forth, President Buhari in June, 2018 hosted Sheikh Ahmed Tijani Ibrahim Niyass, the Grand Khalifah of the Tijaniyyah Movement worldwide (another Sufi branch, which boasts of millions of followers in Nigeria). Netizens again immediately began to speculate, saying: “What’s our president up to? Has he left Qadiriyyah for Tijaniyyah?”

Little did they know that the two movements belong to the same Sufi Tariqa (path), even though their doctrines differ. The Qadiriyyah got its name from its founder, Sufi Sheikh Abd Al Qadir Jilani (c. 1077–1166) while Sheikh Ahmad Tijani (1737-1815) founded Tijaniyyah. May Allah be pleased with them both (Amin). 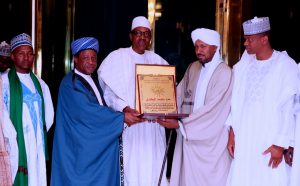 So, in September and later in October 2018, Sheikh Kabara and Sheikh Dahiru Usman Bauchi, leader of the Qadiriyyah sect in Nigeria, at separate times, were among the Islamic Ulamah that honoured Buhari’s invitations in Abuja. Interestingly, those visits came at the time when President Buhari just got his party’s ticket to run as its Presidential candidate for a second term. So, the gatherings were like endorsements, if you ask me.

Despite their cemented relationship with President Buhari, not all Sufis – especially from Southwest Nigeria – will vote for him. This could be due to their loyalty and allegiance to the Senate President, Bukola Saraki, who is currently the Director of the Atiku Abubakar presidential campaign organisation.

Muslim News’ findings revealed that while the unorganised Salafiyyah movement in Southwest Nigeria is still divided and confused on the propriety of democracy and whether to recognise Buhari, a product of “Kufru-tic” (from Kufr (disbelief), and hence forbidden) democracy as a leader, their counterparts in the North have not only visited Buhari on several occasions, but have also vowed to support the President overwhelmingly in the forthcoming elections.

The leading Salafiyyah movement in Nigeria, Chad, Niger and Cameroon, the Jama’atul Izalatul Bidi’a Waiqamatus Sunnah (JIBWIS), under the leadership of Sheikh Imam Abdullahi Bala Lau has already endorsed the candidacy of President Buhari for a second shot at the presidency, and has directed all its members to vote for him in the February 16 presidential election.

The Buhari endorsement didn’t however go down well with the deputy national leader of the movement, Sheikh Sambo Rigachikun, who openly declared support for Alhaji Atiku Abubakar, another Muslim presidential candidate, while calling on all “well-meaning Muslims” to vote for him. 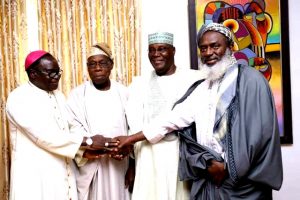 Another Salafi scholar who might likely pitch his tent with Atiku is Sheikh Ahmed Abubakar Gumi, who has been critical of the Buhari-led government since inception. Mid last year, the controversial Islamic scholar described President Buhari as a failure, calling for his resignation.

This remark however did not affect the love for President Buhari among the Salafiyyah group in the North. For instance, the late Sheikh Awwal Adam Albani, who was considered by many contemporary Nigerian scholars as the greatest Salafi scholar the country had ever produced, was one of President Buhari’s die-hard supporters.

In an article titled “Remembering Buhari’s biggest campaigner”, published in Daily Trust of February 2, 2019, Aisha Umar Yusuf wrote, in part: “In the run up to the general elections of 2011, a well known Zaria-based Muslim scholar by the name Sheikh Awwal Adam Albani dedicated several minutes of preaching to telling the electorate what to expect in the event of a Buhari victory.

“He warned Nigerians not to expect any miracles if the General won, because the situation he would meet the country in would be such that in the first four years, he won’t be able to do anything other than halt the damage that had been done to the country.”

Going by the array of support for Buhari in the Salafiyyah movement, even among the divided groups in Southwest Nigeria who openly declared themselves as “Buharists”, many pundits have concluded that President Buhari is a Salafi.

TMC and other Muslim bodies

Like the Sufi and Salafi movements in the North, the Nigerian Supreme Council for Shari’iah, a body that relates with Islamic organisations through the Ulamah and accredited representatives, recently had the opportunity to sit with Mr President inside Aso Rock and discuss the state of the nation. 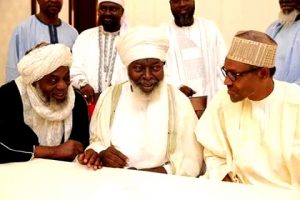 The delegation, led by Sheikh AbdulRasheed Hadiyatullah, also had in attendance Sheikh AbdulFatah Thani and top executives of The Muslim Congress (TMC), one of the leading Muslim bodies in the Southwest.

Although The Muslim Congress, which has thousands of members across the federation, has not openly declared support for Buhari, the Amir of the group, Dr Lukman AbdurRaheem has on several occasions praised the president’s fight against terror and corruption. Muslim News’ findings showed that overwhelming numbers of TMC members will be voting for President Buhari in the next election.

Beyond TMC, it is evident that numerous other (big) Muslim organisations who haven’t had the opportunity to meet President Buhari officially in Abuja during the last three years of his administration will also be casting their votes for him come February 16.

Examples of such include the Jama’at Taawun Muslimeen, the largest Islamic group in Iwo, Southwest Nigeria and a host of other Muslim groups that believe President Buhari, otherwise known as Mr Integrity, is by far the more trusted and competent of the two Muslim candidates. Hence, he should be empowered with another presidential tenure so he can help take Nigeria to the next level. 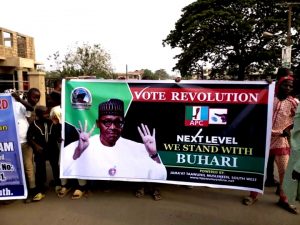 In the final analysis, we can therefore conclude that the love and affection shown to President Muhammadu Buhari by these Muslim bodies is not because he is a card carrying member of Salafiyyah, a Sufi group, TMC or any other Muslim group. Evidently, such undiluted, natural love is based on his faith, Islam, the religion of his spiritual ancestor, Ibrahim, as Allah captured same in Qur’an 22: 78:

“Allah named you “Muslims” before [in former scriptures] and in this [revelation] that the Messenger may be a witness over you and you may be witnesses over the people. So establish prayer and give zakah and hold fast to Allah. He is your protector; and excellent is the protector, and excellent is the helper.”

In a nutshell, as the No 1 citizen of Nigeria, President Buhari is a father to all Muslims, irrespective of their denominations and ideologies, including members of other faiths. He is also the father of those privileged Muslim bodies who met him and those who will still meet him in the future, if Allah wills that he be re-elected. Like the President himself rightly said during one of the visits of the religious leaders to him: “My interest is for all Nigerians, across ethnicity and religion”.