Muslims: The enemies of fellow Muslims

When shall the Muslims get things right in Nigeria? When are they going to take their rightful place in global affairs? We parade the highest population compared to other religions in Nigeria, pathetically however, this population has not translated to power. We continue to remain retrogressive in all spheres of life. In government, we are not ably represented. In the legal profession, our voices are not heard. In the media, we are nowhere to be found. In the media, we lack both ownership and readership.

What is worse is that when a part of us becomes conscious and rises up to the task, another part will be inhibiting the success of the former either directly or indirectly. We are the architects of our own many travails and misfortunes. This, you hardly find amongst the people of the other faith. Though they may be divided also, whenever what pertains to their religious interest comes up, they become united. Let me share a story to this effect.

So, I went to Sanrab first, and I displayed the tabloid. As usual, passers-by were scanning through because the tabloid was attractive and of standard quality – though just coming up. There came some brothers whom the colorfulness of the tabloid must have attracted. “How much is this newspaper?” they quizzed. “It is just for N100”, I replied. When they saw Muslim News, they became so eager to know its content that you can read it on their faces. Then the big SHOCKER: As they made to bring out money from their pockets, they scanned through the front page. As they saw the pictures of President Erdogan, Sheikh Qaradawi and reports from World Hijab Day, they did not even bother to read through again. They erroneously concluded and said they weren’t buying anymore, with the allegation that the Muslim newspaper is a publication of The Muslim Congress (TMC). I guffawed endlessly. Just that? It was then I realised that these brothers are members of the Nigerian faction of the Salafi-Wahhabi sect. 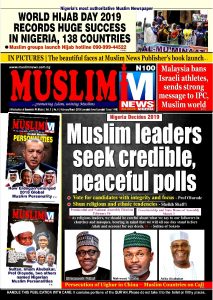 Can you imagine? Just because of Erdogan and Qaradawi, they didn’t bother to buy the Muslim News newspaper, which is filled with well researched stories about the 2019 elections. Meanwhile, the two personalities that made them lose interest in the tabloid are enigmas and phenomena. Perhaps, a quick read through the biography of Sheikh Yusuf Al-Qardaawiy could have given them a second thought. But with their reaction, it shows they know little about the personality of the Islamic scholar. Here is a man that committed the whole Quran to heart at 9. His contribution to Islamic scholarship cannot be quantified. His wealth of knowledge traverses the nooks and crannies of the world. Let me leave you to read more about him, and then question the fear of my friends.

Then to Tayyip Erdogan. Who is afraid of Erdogan? He remains the foremost Islamic leader on earth at the present moment. By Islamic leader, I mean one who stands by Islam, acts in accordance with Islamic rulings and stands as a voice for the billions of voiceless Muslims. Is it therefore worth it to lose interest in buying a tabloid because of someone like this? Unfortunately, these are the same set of people who are in bed with a leader who has not only become an ally to the enemies of Islam, but has also consistently flouted the preachments of Islam.

What amazes me further is that the publisher of this newspaper, Rasheed Abubakar, though an MSSN member, has always stood for Islam, and not for the TMC alone. In fact, the rationale behind the newspaper is to serve as a mouthpiece for under-reported Islamic events in the mainstream media. And since nobody has summoned the courage to hold the bull by the horn to establish a news medium along this ideology, why the discrimination from these brothers? This is an Islamic affair, and it needs the support of all Muslims. 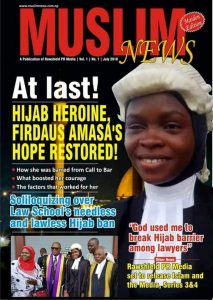 In the debut edition of the newspaper, it was awash with stories about Amasa Firdausa and the Call to Bar saga. The publisher didn’t ask if Amasa was a TMC member or not when he blew her trumpet. Also, the second edition was particularly inundated with stories on Hijrah and Imam Abdullahi, the Muslim cleric who saved over 300 Christian lives in Plateau state. Again, the publisher entertained opinions of different Muslim scholars from among the Ahlus-Sunnah. In fact, he did not want to know if Imam Abdullahi was a Salafi or a Sufi; what mattered to him was that he is a Muslim and he made Islam proud with his action. So, why the phobia?

Discrimination is against the ethics of Islam. In fact, how will you know that something is bad if you have not gotten a good idea of it? Other religions are leaving Islam behind because of our nonchalance. However, I take solace in Allah’s words that he would always come to the aid of his religion even when the so-called Muslims are in deep slumber. May the Salafists not take it to the level that once you are a TMC, they won’t buy from or sell to you! And to Muslims generally, let’s stand by Islam and anything that represents it always. May Allah’s will prevail! 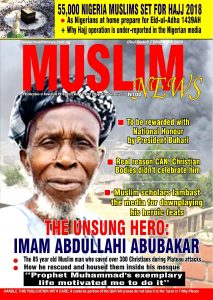 We shall be fair to all persons, irrespective of their religions and ideologies, as long as that promotes the image of Islam and unites the Muslims. We shall also uphold the ethical standards of journalism, as allowed by Islamic ethics.