By Rasheed Abubakar and AbdulWaheed Shotonwa

The National Missioner of Ansar-ud-Deen Society, Sheikh (Dr) AbdurRahman Olanrewaju Ahmad has called on Nigerian Muslims to ignore those who said voting is forbidden and go out en masse to exercise their civic rights in the general elections rescheduled for February 23 and March 9, 2019.

In an exclusive interview with Muslim News, Nigeria’s most authoritative Muslim newspaper at his residence in Lagos, Southwest Nigeria, Sheikh Ahmad cleared the air on the misconceptions surrounding Muslims’ participation in Nigeria’s democratic dispensation.

There have been distractions from a faction of a Muslim sect who erroneously posit that voting in a democracy is haram (unlawful), thereby calling on the generality of Muslims to boycott the general elections.

There are also, among the group, those who say Muslims should endure, even if they are oppressed and when their rights are taken away from them. They also asked Muslims to reject polls, claiming voting is diametrically opposed to Islamic principles.

The Ilorin-born scholar said such notions are not restricted to Nigeria, but global. He maintained that several senior scholars across the world have concluded that voting in a country not ruled by Shari’iah is an obligation for all Muslims.

According to him, the Nigerian constitution is not Islamic. Some people say it is secular and others say it allows multiple religions. Whatever you call it, there is no doubt about the fact that it is not Islamic, although the Muslims might be in the majority, or at per with the other major religious community. Evidently, Nigeria is not an Islamic country.

He said, “In situations like ours, there are two clear options. First, to choose not to have anything to do with democracy, which is virtually impossible. To boycott elections in a country like Nigeria has many more disadvantages, and its demerits for Muslims far outweighs its merits.

“Second, to hold that voting constitutes assisting people who rule by other than Shari’iah, and thereby choose to boycott elections. This will surely have no significant impact as wrongfully presumed. We are in a special circumstance. Hence, it becomes an obligation for us to participate and make as much positive impact as we can, in order to make a difference,” he said.

Sheikh Ahmad told Muslim News that in the case of democracy, there are the ideals and realities, stressing that, “we may not have the ideal but it cannot be as bad as not having a choice, which democracy in a multi-religious country like Nigeria affords us.”

Explaining further, Sheikh Ahmad said, “Look! If Nigerian Muslims unanimously decide to boycott the general elections, that would not stop the electoral commission from conducting it as planned. People would get elected and they could be the people who would be hostile to us (as a Muslim community) and to our religion (Islam).”

Speaking on the evil of boycott, the National Missioner of Nigeria’s first elite Islamic society related the United Kingdom’s experience. 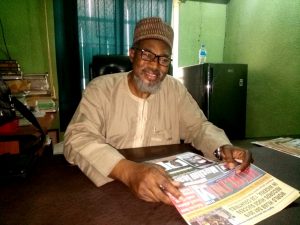 “Sometimes in Britain, there was an Islamophobic party which wanted to close down mosques, ban the Hijab, and cancel faith-based schools, among other anti-Muslim moves.

“And there is another party which for instance, wanted to fight Islamophobia, defend Palestine, allow the Hijab, tolerate beards and respect people’s convictions.

“Assuming in that circumstance, all Muslims in Britain chose to boycott the elections. Would that have stopped the election from being held? Obviously, the election would certainly go on and the Islamophobic party would have won. If all these happened, who is to blamed? No one, but the Muslims themselves.

“It is in situations like this that permission is granted because it is a special circumstance of Ad-Dharuri (necessity). Consequently, many scholars concluded that it is not only necessary but obligatory for Muslims to be involved and engaged in the process. If we are not there, nobody will protect our interests.”

Sheikh Ahmad also noted that though elections should not be based on religious or ethnic affiliations, there is nothing wrong if Nigerian Muslims choose candidates who will stand for their collective rights as an Ummah.

According to him, we live in a country where our rights are being trampled upon. Elections do not only give us the opportunity to choose candidates who are competent, trusted, honest, credible, efficient and God fearing. It also afford us the right to choose candidates who will serve our collective interests as a faith-based community. If you must vote, vote in a manner that you will be able to stand before Allah and explain the reason for your choice.

“We must therefore choose candidates who will defend our rights to practice our religion without hindrance as bona fide Nigerians. We must elect candidates who will contribute to the greater productivity of our people. We must not vote for those who are only out to protect personal agenda, but those who will fight against and put an end to the maltreatment of Muslims,” he explained.

The veteran journalist and broadcaster however admitted that despite scholarly explanations, some people’s minds are already made up against voting and democracy.

“My advice is that there are matters that are not for students. Those who are just seeking for knowledge must not assume that they have become Muftis and begin to issue fataawah (religious verdicts). Even if they are doing Taqleed (followership), they must know that there are matters over which opinions defer.

“In this circumstance, it has become obligatory for Muslims to go out and vote in such a manner that the collective interests of the Muslim community will be served. We might not get the candidates with all the qualities. That is why we go for the lesser of existing evils. Some are more evil than the others. Which evil is more, which is less? Check their track records. What have they been able to do in the past? Chances are they can’t be better than their past. Abstinence is not an option. Anything to the contrary can jeopardise the collective interest of the Muslims.”

Sheikh Ahmad further called on Nigerians, the Independent National Electoral Commission (INEC) and other stakeholders to ensure free, fair, credible and peaceful elections, noting that peace is a prerequisite for every aspect of human endeavour.

He also cautioned against hate speeches and propaganda capable of overheating the polity. He urged Nigerians to avoid what could plunge the country into crisis, and advised them to be agents of peace and tranquillity during and after the elections.

The Sheikh said, “We have found ourselves in this situation now and we virtually do not have a choice other than to seek maximum benefits accruable from the system. So, I will say I expect an election that would be free, fair, credible, and acceptable to the majority of the reasonable people. I also expect it to be peaceful and violence-free”.

“Peace is centrally important because it is a prerequisite for other things. Without peace, we can’t even fulfil our religious obligations, go to places of business, or earn our living.

“We must take a lesson from the happenings in Venezuela right now. It is highly probable in Nigeria if care is not taken – hence we must not be under the illusion of sovereignty. The wicked interest against Nigeria’s survival, peace, stability, and continuity is enormous and we must not play into the hands of both the enemies within and without. Some of these interests have predicted the collapse of Nigeria as far back as 2015. They are still very much interested in seeing their prediction comes to reality!

“Politicians must realise that they can’t be leaders without a country. First, we need a country and whoever does not succeed, there is always another time. This is paramount, otherwise we would create by our own doing a situation where we will unwittingly trade our sovereignty, freedom, peace and rights as a people”, he added.