Buhari: The making of a new Nigeria by Rasheed Abubakar

These beautiful pictures of President Muhammadu Buhari in his office at Aso-Rock, the seat of power, released online barely 10 hours before he was declared the winner of the just concluded Nigerian presidential election remind us of Caliph Umar Bn Khattab’s unique and great system of government.

History has it that the Amir-ul-Mu’mineen (the Leader of the Muslims) established an effective system of judicial administration and built a strong army that protected the Muslims from external aggression and expanded the Islamic empire in an unprecedented way.

Under his leadership, Islam spread widely, not by the sword, but by virtue of its beauty, simplicity, openness and the virtuous leadership provided by him.

Caliph Umar was merciful to all. He was aware of every citizen – males, females, young and old, with all their names documented in the official records. From the public treasury, he gave every Muslim stipends and every night, he would patrol the streets of Madinah, the then headquarters of Islam and its outskirts in order to help the needy and protect those in distress.

When it came to doing the right thing, nothing came between such and Umar. Little wonder he was nicknamed “Al-Faruq” – the one who distinguishes between right and wrong, just like the Nigerian President-elect, Muhammadu Buhari, whose integrity brought him back to rule Nigeria the second time despite the gang-up from the opposing powers. 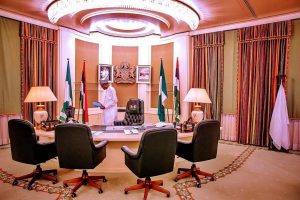 His success story at the polls is the story of every Nigerian who believes in the maxim that says, “One good turn deserves another”. Despite the many challenges he faced the first time, his wisdom, honesty, patriotism and fervour for this great country have taken us this far and we believe that with his amiable Vice President, he will take us to the pinnacle of success, Allah-willing.

Umar-Faruq was a most truthful man who had respect for all individuals – Muslims and non- Muslims, without discriminating between them. While forming his government, he kept the most experienced and qualified companions with him in Madinah as his advisors.

But that didn’t prevent him from consulting with Muslim youths, who he said had sharper minds by virtue of which they could come up with original ideas.

We at Muslim News (https://muslimnews.com.ng) rejoice with President Buhari on his re-election and recommend for him Umar’s model, which is considered to be one of the best in the world’s history, in steering the affairs of this great country to the #NextLevel.