The United States of America has joined the rest of the world to condemn the coordinated terrorist attacks on two mosques in the Christchurch area of New Zealand, where no fewer than 49 Muslim worshippers were murdered in cold blood, in a clear act of terrorism.

Muslim News Nigeria however discovered that there was no mention of “mosques” and “Muslims” in the official statement signed by the US government’s press secretary, Sarah Sanders on Friday morning.

Many mainstream media, including CNN, which also observed the omission said the White House “did not mention specifically that it was at a mosque or that Muslims were killed.”

The statement read; “The United States strongly condemns the attack in Christchurch. Our thoughts and prayers are with the victims and their families.

“We stand in solidarity with the people of New Zealand and their government against this vicious act of hate.”

In a similar development, National Security Adviser John Bolton stated that the US is “very concerned” and is following the events in New Zealand “very closely,” with no specific mention of the families of the Muslim victims and the Muslim community.

“We are obviously greatly disturbed on what seems to be a terror attack, this hate crime in New Zealand. We’ve been in touch with our embassy overnight, we’re still getting details, but the State Department and others are following up on it,” he told reporters Friday morning, as reported by CNN.

The US President, Donald Trump also failed to mention “Muslims” in his tweet early today, but couldn’t afford to omit “mosques” because the terrorist attacks occurred in two mosques.

The tweet read, “My warmest sympathy and best wishes goes out to the people of New Zealand after the horrible massacre in the Mosques. 49 innocent people have so senselessly died, with so many more seriously injured. The U.S. stands by New Zealand for anything we can do. God bless all!”

The development, many Muslim netizens believe, has further confirmed Trump’s hostility and animosity towards Islam and Muslims, which has been on the rise since he became the President of the United States of America. 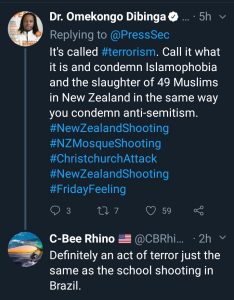 Coincidentally, the prime suspect in the attacks, a self-confessed white supremacist terrorist praised Trump, describing him as “a symbol of renewed white identity and common purpose” in his 74-page dossier, which has been described by Australian Prime Minister Scott Morrison as “a work of hate.” 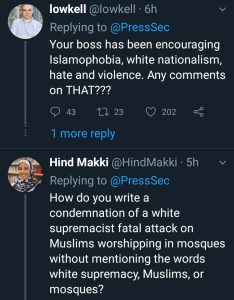