Erdogan, AKP and the Fallacy of Autocracy

– A rejoinder to The Economist’s report on Turkey’s election

Dear The Economist, if President Tayyip Erdogan of Turkey is truly the “autocratic president” you painted him as in your story, titled, “Erdogan loses Istanbul and Ankara: Local elections are a blow to Turkey’s autocratic president” and several other damaging reports in the past, he would have used his power to change the votes in favour of his AK Party candidate, Binali Yildirim against Ekrem Imamoglu of CHP who eventually won by “the thinnest of margins” as you stated in your report, because Istanbul is “the country’s economic engine” and Erdogan would want to desperately protect it at all cost.

It is interesting also to note that the “thinnest of margins” was just 25, 000 votes, as both candidates secured over a million votes each and President Erdogan would have influenced the Supreme Election Board (YSK) to manipulate or declare the election inconclusive, as there were 31,136 invalid votes.

This scenario is similar to the allegations levelled against Nigeria’s ruling APC during the just concluded 2019 general elections. Though the results can still be challenged subject to the country’s electoral law, that is not tantamount to autocracy or dictatorship, as often used frequently to describe Erdogan by the mainstream media, including The Economist, a London-based, weekly English language magazine. 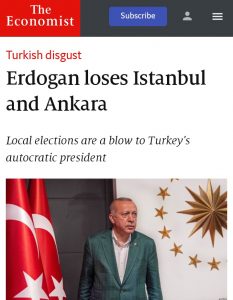 If truly Erdogan is an autocratic leader, he would have imposed Binali Yildirim, who according to your report, was “a former prime minister and parliamentary speaker” and “had the support of a media controlled by pro-government tycoons.” Nobody would have known if the electoral commission had rigged the election because according to your report published yesterday, April 1, the opposition’s pick, Ekrem Imamoglu, “had the backing of a hapless, squabbling party, a fraction of his opponent’s resources and only a few years of experience as district mayor under his belt.”

Interestingly, ‘wailers’ in the Turkish opposition parties who had in the past called President Erdogan “autocratic” and “dictator” because they lost in the previous elections are now saying “democracy won”, just because they won three major cities – Istanbul, Izmir and Ankara, the state capital.

Really, politicians are the same everywhere, including in Nigeria where the ‘wailers’ in the leading opposition party raised no eyebrows in states where their parties won, but were very quick to accuse the ruling party and the electoral commission of complicity where their parties lost, with rallying cries of “democracy is under threats.”

President Erdogan is truly a democrat. He is the hero of this election and he deserves accolades for allowing the electoral commission to do its job without interference. This election is yet another proof that Erdogan’s AK Party has always been winning in the previous elections, contrary to the negative portrayals by western media. His party lost control of major cities largely due to the 2018 currency crisis, which was orchestrated by the US and Trump during the trial of an American evangelical Christian pastor, Andrew Brunson, who was accused of spying for Kurdish separatists.

Although, AKP-led alliance with the People’s Alliance won 52% of the vote nationwide, Erdogan admitted to losing major cities partly due to the reason mentioned above, but vowed to focus on carrying out economic reforms, the same way he brought Turkey out of its financial mess in 2001 and the party he founded went on to win 15 consecutive Turkish elections since 2002, with successively higher margins most times.

That is what democracy is all about. That is what true leadership stands for. That is what President Erdogan has just demonstrated in the latest elections that saw winners emerge for different political offices, including mayors, city council members, mukhtars (neighborhood officials), and members of elder councils. He realised the weaknesses that brought about the setback and promised to address them before the next election, which holds in 2023. These are the exemplary leadership traits The Economist and other western media always refuse to celebrate, in their desperate bid to bring President Erdogan and the AKP down. Unfortunately for them, the more they try to demarket him, the more he is seen as an internationally recognized brand, and the preeminent defender of oppressed Muslims all over the world.