All you need to know about Brunei anti-gay law

“Barbaric to the core” was the American, news-based CNN’s headline of yesterday, April 3, describing Brunei’s new laws that make gay sex punishable by stoning to death, in accordance with the country’s Shariah law. 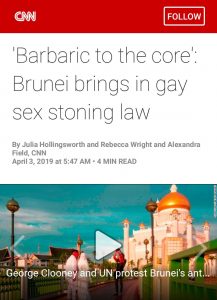 For Daily Mirror, a UK national daily, the implementation of the anti-gay sex law is “horrific”, as used partly in the headline, stressing that it is unbelievable that in 2019, same sex couples could be whipped or stoned to death in a small Southeast Asian country of about 420, 000 people, with two-third of them being Muslims. 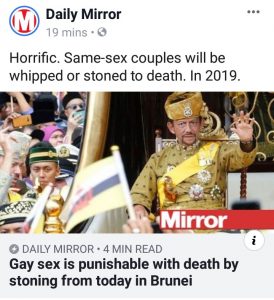 Although many international media gave prominence to the “gay sex” component due to the global rise of LGBT – an initialism that stands for lesbian, gay, bisexual, and transgender – the Brunei laws also cover adultery and other crimes, including punishment of theft by amputation.

Worse still, British online newspaper, The Independent and a couple of other online media featured a story with the headline; “Brunei adverts removed from TFL network,” threatening that the United Kingdom will remove “all adverts promoting Brunei as a tourist destination from the Transport for London (TFL) network” if the law is not halted. 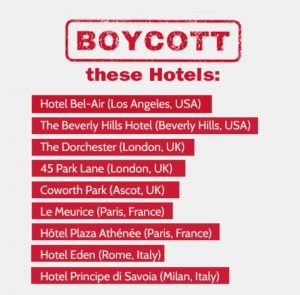 As a way of protesting against the Shariah law, Hollywood star George Clooney and American comedienne Ellen DeGeneres have mobilised their fans on Twitter, a social networking service, calling for a boycott of all the hotels owned by the country’s Investment Agency in the US, UK, France, Italy and across the globe.

An attempt to back and present Brunei’s Sultan Bolkiah’s decision by The Dorchester Collection, the hotel managers proved abortive as many pro-LGBT netizens “ridiculed” and “forced” the company to delete their social media accounts, according to the UK Daily Mail, which in another report, as appears in the headline, reported that Sultan Hassanal Bolkiah and his supporters are “…taking LGBTQ rights back to the Stone Age.” 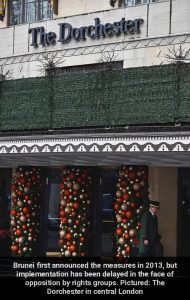 There has been what ABC News, owned by Disney Media Network, called a “global backlash against Brunei’s new anti-LGBT law” in its headline of yesterday, quoting Neela Ghoshal, a researcher for Human Rights Watch, saying LGBT people in Brunei are “extremely anxious” as the new law comes into effect.

Many countries and human rights activists, including the United Nations which have watched Israeli atrocities against Palestinians for years without action were quick to attack Brunei’s Sultan Hassanal Bolkiah, the world’s second-longest reigning monarch.

Bachelet therefore urged Brunei to uphold a long tradition of not applying death penalty laws that have remained on its books. The country last carried out an execution in 1957.

All you need to know about Brunei anti-gay law

Muslim News Nigeria’s findings however revealed that many western media failed to explain in details the application of the new law because of their objection to it.

Checks by this medium showed that the Islamic penal code is not new. It has been in existence since October 2013 when Sultan Hassanal Bolkiah first made the official announcement, but delayed its full implementation for six years (till April 3, 2019). 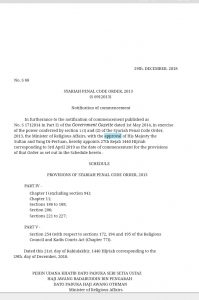 According to a document titled “Shariah Penal Code Order 2013”, Brunei, known as “The Abode of Peace” suspended the implementation of the law till 27th Rejab 1440 Hijriah (corresponding to 3rd April 2019) as the date of commencement for the provisions.

The most important aspect of the new laws is that there will be no room for jungle justice or people taking laws into their hands, “as individuals accused of any of the acts will only be convicted if they confess or there were witnesses present at the time the acts were committed.”

Sultan Hassanal Bolkiah, the 29th and current Sultan and Yang di-Pertuan of Brunei, said during the 2013 announcement that judges would be given discretion in their sentencing. 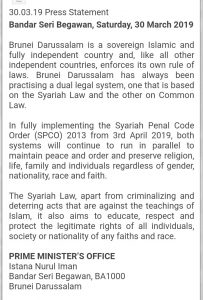 The country’s top Islamic scholar also said that the Shariah law guaranteed justice for everyone and safeguards their well-being. 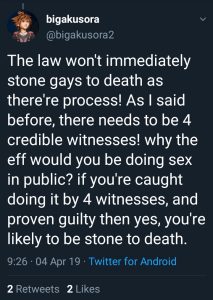 The laws will make Brunei the first country in East or Southeast Asia to implement the new penal code at the national level, joining several mostly Middle Eastern countries, such as Saudi Arabia.

The new law mostly applies to Muslims, though some aspects will also apply to non-Muslims. It stipulates the death penalty for a number of offences, including rape, adultery, sodomy, robbery and insulting or defaming the Prophet Muhammad (peace be upon him). 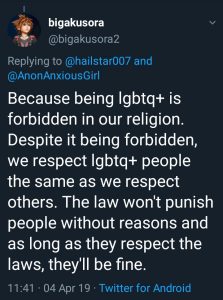 It also introduces public flogging as punishment for abortion as well as amputation for theft and criminalises exposing Muslim children to the beliefs and practices of any religion other than Islam.