Despite lies that he is not a Muslim, Gbajabiamila emerges Speaker of 9th House of Reps

– Takes oath of office with the Noble Qur’an

The lawmaker-elect representing the All Progressives Congress (APC) from Surulere Constituency 1, Lagos, Hon Hakeem Femi Gbajabiamila has emerged the Speaker of the 9th Federal House of Representatives.

He was seen taking the oath of office shortly after he was declared Speaker using the Noble Qur’an, which is an indication that he is Muslim, thereby ending the age-long, needless controversy about his faith.

Pictures of Hon (Dr) Femi Gbajabiamila in the Ihram (shroud) performing Umrah in Makkah, Saudi Arabia have become a subject of discourse on social media, with rumours that the legislator, representing Surulere Constituency 1, Lagos at the Federal House of Representatives is an erstwhile Elder in the House on the Rock church in Lekki, Lagos (some accounts said he is still an elder in an undisclosed Pentecostal church). 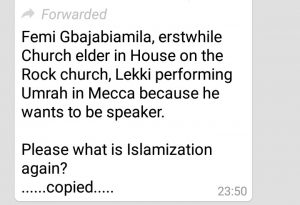 The pictures, though shared by multiple accounts/handles on social media, featured captions to the effect that Hon Gbajabiamila is a betrayer, who now parades himself as a Muslim after years of wining and dining with Christians, in a bid to appease the Muslim lawmakers to vote him as the Speaker of the 9th House of Representatives.

The critics of the lawyer turned politician also attributed the development to the purported “Islamisation agenda”, which the President Muhammadu Buhari-led government has been accused of by former President Olusegun Obasanjo. 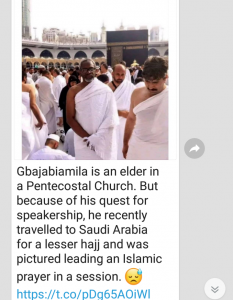 Some of the allegations include that Gbajabiamila does not officially disclose his first name, Abdul Hakeem, which means, “servant of the All-Wise”, as he is widely known by friends and political associates as “Femi”, his Yoruba name, which could be termed a Christian name.

They also said, unlike other politicians, Dr Gbajabiamila has not been identifying himself with Islam in his public, everyday dealings, until recently when in March 2019, pictures of him leading some men in Solatul Maghrib at his campaign secretariat hit the cyber space.

Hon. Abdulmumin Jubrin, who heads the campaign team for Gbajabiamila’s election as House Speaker, tweeted the pictures with a caption that suggested the pictures were “politically motivated”. See it below: 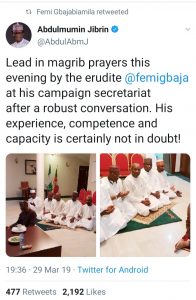 In April, another picture of Hon Gbajabiamila sitting at the feet and clinging to the thighs of a popular Islamic scholar, Sheikh Dahiru Bauchi, the leader of Darikar Tijjaniyah Movement in Nigeria also generated controversies. Femi Fani Kayode joined several other Nigerians to slam Gbajabiamila over that image, saying in a post that the latter did that because “he wishes to be a Speaker”. See the picture below: 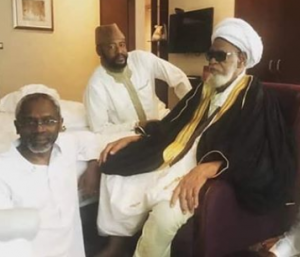 Some Muslims have also become worried with the impression that Gbajabiamila now “remembers that his ancestors were Muslims and wants to use them to win the Speaker position.”

Hon Abdul Hakeem Femi Gbajabiamila is not currently performing Umrah as alleged in the trending pictures. Yesterday, the lawmaker tweeted some pictures of himself and other guests at the Presidential Inauguration Dinner and Gala Night held in Abuja. He and his team have since continued their engagements towards his quest to become Speaker. 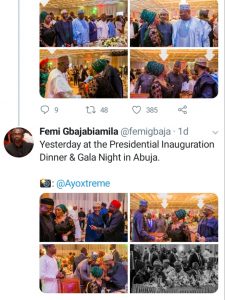 The viral picture of him in Ihram is an old picture. Muslim News fact-checks showed that it was taken on August 21 2018 on the day of Arafah, the day before the Eid-ul-Adha celebration, which coincides with the last day of Hajj, the last of the five pillars of Islam in Makkah, and not Umrah as claimed by rumour mongers.

Hon Femi went on Twitter to wish his Muslim brothers and sisters Eid-ul-Kabir. He wrote, “My fellow Muslim brothers...” See the exact image and tweet below: 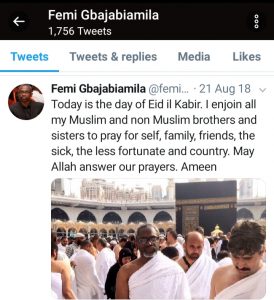 Today is the day of Eid il Kabir. I enjoin all my Muslim and non Muslim brothers and sisters to pray for self, family, friends, the sick, the less fortunate and country. May Allah answer our prayers. Ameen

Here is another evidence that he is a Muslim

When Ramadan 2019 commenced on May 6, like many politicians and celebrities would do, Femi Gbajabiamila went on social media to wish his fellow Muslim brothers and sisters Ramadan Kareem. See the tweet below: 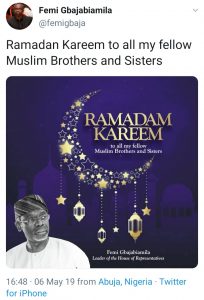 He used the particular words; “My fellow Muslim brothers and sisters”, thus indicating that he is a Muslim. Compare the choice of his words to how he greeted Nigerians during the December 25, 2018 Christmas and New Year festivals; “I wish every single Nigerian wherever he/she may reside and whatever his/her ethnicity or religion a merry Xmas and a happy New Year,” he tweeted. 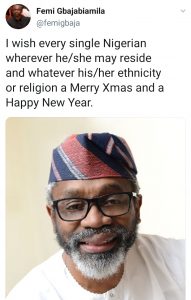 Gbaja in the eyes of people who know him

Those who are regular visitors to his family house at Mercy Eneli Street, off Masha Road and his constituency office at Olumegbon Street, off Western Avenue, both at Surulere, Lagos told Muslim News that “Bro Hakeem”, referring to Gbajabiamila, is a Muslim.

“I don’t know the intent of the people spreading this news but it is nonsense talk for anyone to say he is not a Muslim no matter. Although he isn’t as committed to Islam as his mum, he is surely a Muslim,” Jubril, a friend of the family said, while speaking with Muslim News.

We also visited Ansar-ud-Deen Society of Nigeria, Ajao Branch, Surulere mosque, where Hon Gbajabiamila usually observes his Solat (Muslim prayers) when he is in Lagos.

Wasiu Akinsola, a regular worshipper at the mosque, said he had prayed Solatu Jum’ah (Friday prayer) with the Honourable many times.

“He was always on the front row. Though he is not that religious, only Allah knows those who worship him. He can still do better. His mother is also a member of Ansar-ud-Deen,” Akinsola said.

Speaking with Muslim News from Saudi Arabia where he is performing Umrah, Hon. Kabir Lawal, famously known as ‘Caesar’, said: “To the best of my knowledge, Gbajabiamila is a Muslim.”
According to Hon Lawal, “probably before now, he may not have been a practicing Muslim to the extent of completing his five daily prayers like most of us do. However, that to me is not enough to say that such a person is not a Muslim.”
The two-term Honourable of the Lagos State House of Assembly, who is also from Surulere Constituency 1 said Gbajabiamila is not just a Muslim, he was also born into a Muslim home. His late father was also a devout Muslim.
“The mother was a Christian but was converted to Islam by her husband and today, I doubt if anyone can come out to say he or she is more religious than Alhaja Gbajabiamila,” Lawal added.
Now that it is established that he is a Muslim, why the fuss about his faith?

A tweep who goes by the name, Adeyemi Onikoro ended the controversy about Gbajabiamila’s faith with the post below:

READ ALSO...  Changing the Narratives: How Muslims became the good guys on TV

“What is all this noise of Femi Gbajabiamila being a Muslim or Christian? Is he contesting for the position of Imam or Archbishop? What does religion have to do with the Speakership position? When we continue to think this way, we will continue to have problems in this county.”