The OIC debate and fallacies of Islamisation in Nigeria

The Christian Association of Nigeria (CAN), the foremost Igbo cultural body in Nigeria, Ohaneze Ndigbo and other bodies have been blowing hot and threatening fire and brimstone lately since President Muhammadu Buhari attended the 14th edition of the Organisation of Islamic Cooperation (OIC) summit in Makkah, Saudi Arabia, fuelling once again the allegations of a phantom “Islamisation agenda” against his administration.

The OIC – which has 57 member-countries – has among its goals the promotion of solidarity amongst member states; increased cooperation in social, economic, cultural, scientific, and political areas and upholding international peace and security, among others.

Rather than taking advantage of the OIC opportunities listed above, the Christian body and other critics have alleged that President Buhari’s attendance at the summit is unconstitutional, insisting that the military under former Head of State, Ibrahim Babangida smuggled Nigeria into the OIC, an organisation that represents the collective voice of the Muslim world, in 1986.

However, CAN pretends to have forgotten that the former President Goodluck Jonathan, a Christian from the South-South geopolitical zone of Nigeria also once graced the same summit, which was held in 2013 in Cairo, Egypt and interestingly, there is no available evidence that CAN criticised Jonathan then as it is currently attacking Buhari now. It will be right to therefore conclude that Jonathan has been a major driver of the Islamisation agenda in Nigeria, with zero resistance from CAN and others.

In fact, CAN could not have condemned former President Jonathan back then because his spiritual father and prominent supporter, Pastor Ayo “Bling-Bling” Oritsejafor was the President of the controversial Christian body at that time.

Surprisingly, what Papa Ayo Oritsejafor could not do for Jonathan in 2013, another pastor-turned-politician did for him two years later. During the 2015 presidential election, Nigeria’s now second-term vice president, Prof. Yemi Osinbajo (who was then President Buhari’s running mate) criticised Jonathan for being the first and only sitting Nigerian president to have attended the OIC meetings since the country joined same in 1986 under Babangida.

The Guardian of February 3, 2015 and other media quoted the Vice President to have said, “When Gen. Babangida eventually dragged Nigeria into the OIC, none of the successors ever attended any of its meetings because they know to Islamise Nigeria is very difficult as you need to first get the constitution amended. That process, you know, is almost impossible.

“But it is on record that in 2013, President Jonathan, undermining the constitutional limitation, ensured that Nigeria attended an OIC meeting,” he added.

Apparently, one would have expected the Vice President to criticise his boss, President Buhari, the same way he went hard on Jonathan four years ago for “being the only president that led a Nigerian delegation to the OIC.” Or is it because Prof Osinbajo is part of the same government or he has suddenly realised that no nation can be Islamised by being a member of the Organisation of Islamic Cooperation?

While expecting Prof Osinbajo to respond to this poser, another question comes to mind; was the Vice President correct to have said it was only Jonathan that had attended the OIC meetings? The answer is No! Perhaps the Vice President had committed an unintentional electioneering campaign gaffe, but it is on record that in March 14, 2008, the late President Umaru Musa Yar’adua participated in a two-day OIC summit held in Dakar, Senegal. 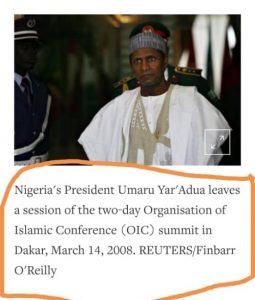 Interestingly, former president Olusegun Obasanjo, who suddenly turned against the government he once supported in 2015 with his recent allegations of Fulanisation and Islamisation, also attended the D8 organisation for economic cooperation sunmit, of which Islamic countries form a major part, in 2001 in Cairo when he was in power.

Obasanjo never contested Nigeria’s membership of the OIC and D8 during his eight years in power, until recently when he raised a false alarm about a phantom Islamisation agenda of Nigeria and by extension, West Africa – – a development many has described as the hallucination and a hangout of election defeat!

In its September 2, 2016 edition, The Guardian published an opinion article titled, “OIC and the myth of Islamisation in Nigeria”, where the writer, Dauda Ayanda quoted what Prof. Emeka Uka – Prelate and Moderator of the General Assembly of the Presbyterian Church of Nigeria said about former President Obasanjo.

He said, “Olusegun Obasanjo and retired General Ibrahim Babangida deserve to be tried for treason as punishment for systematically violating the constitution of the Federal Republic of Nigeria by attending the G8 summit of the OIC during their reigns in office.

Undoubtedly, Nigerian politics is built on hypocrisy, lies and deceit. Politicians use different tricks to further their personal and selfish agenda and gain people’s sympathy. One of such is the allegation of the “Islamisation agenda” and for more than 30 years since Nigeria joined OIC, no Nigerian has been Islamised. Both Jonathan and Obasanjo are still Christians till date, while the Constitution of Nigeria remains unamended in favour of Muslims since 1999.

It is interesting to note that several West African (French and English-speaking) countries such as the Republic of Benin, Burkina Faso, Cameroon, Ivory Coast and Uganda, – though with large Muslim populations but not necessarily Muslim majority countries, are also members of the OIC and their Presidents/Foreign Ministers (most of which are Christians) have not Islamised their countries since they joined the organisation and have been attending the annual OIC summits. Why is Nigeria an exception? Why the lies over a purported Islamisation?

Evidently, “Islamist-terrorists”, a misnomer fondly used by The Punch newspaper for Boko Haram, have killed more Muslims than Christians, burnt more Mosques than Churches, and killed more Muslim scholars than pastors since they started what Obasanjo and his co-travellers termed the “Islamisation agenda” in 2009. Likewise, the major victims of banditry in Zamfara, Sokoto, Nasarawa, and Kogi States are Muslims.

Apparently, no Muslim, particularly those who have lost loved ones to these barbaric attacks, will ever agree with the media narrative that Boko Haram insurgents or bandits are Jihadists fighting a holy war. It befuddles human reasoning to link the group of criminals that killed Muslims and Christians indiscriminately to Islam, all in the name of politics and power tussles among desperate Nigerian politicians.

Ironically, many states in Nigeria and personalities, including critics, have benefitted from the massive investment opportunities offer by the OIC. The multi-million dollar funding of bilingual education during the Jonathan era, the project for training and guidelines on Sukuk issuance under the current administration and the 532.8 million dollar grant from the Islamic Development Bank (IsDB) for Technical Assistance in Nigeria are a few examples of OIC largesses.

Aside economic benefits, the OIC, which has long declared Boko Haram a terrorist organisation, has renewed her committed to supporting member-states such as Nigeria and other troubled nations affected by insurgency, including Chad, Niger and Cameroon, in building their defence and security forces to counter terrorism and combat organised crime.

Hence, it is high time we stopped overheating the polity with unguarded allegations, lies, and deception capable of dividing the country and join the current administration in putting an end to the scourge of terrorism in Nigeria.

– Rasheed Abubakar is the publisher of Muslim News Nigeria and the author of “Media Narratives of Muslims in Nigeria: Facts and Fallacies”. Email: rawshield123@gmail.com | Twitter: @rawshieldpr