The Central Committee of Sudanese Doctors (CCSD) said no fewer than 120 protesters have lost their lives, while the director general of the health ministry put the figure at 61 as at June 12. However, many Sudanese activists say today, Sunday, on social media that more than 500 protesters have been killed, 723 injured, 650 arrested, 48 women raped and over 1000 missing, while calling for an end to the massacre.

Sudan’s ruling military council has, for the first time, admitted it ordered the dispersal of a sit-in in capital Khartoum, which left scores dead, as diplomats from the United States and African nations step up efforts for a solution to the country’s political crisis.

Protesters had staged the weeks-long sit-in outside the army headquarters in Khartoum following the military’s overthrow of long-time leader Omar al-Bashir in April.

Sudan’s pro-democracy protesters continued their agitation, demanding that the TMC, which took over from al-Bashir, hand power to a civilian-led transitional body.

On June 3, days after talks between protest leaders and the military collapsed, armed men in military fatigues broke up the camp in an operation that left 120 people dead, according to the doctors, who also said at least 40 bodies were recovered from the Nile.

The health ministry put the nationwide death toll for that day at 61. 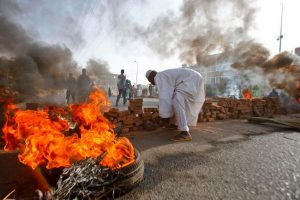 “We ordered the commanders to come up with a plan to disperse this sit-in. They made a plan and implemented it … but we regret that some mistakes happened,” Kabashi said on Thursday.

Kabashi also blamed protesters once again for the breakdown in negotiations between the military and protest groups.

“What is delaying the negotiations is the false understanding of a civilian-led government … In my view, civilian is the authorities, the ruling, the task which we agreed on. After we agreed that government ministers and the legislative council would be civilian-led, they are still screaming civilian, civilian,” he said.

“We believe the majority [of the sovereign council] should be military men and the leadership should be the military. They [protest groups] believe otherwise. We insist that the military is the sole guarantor for peace and stability in the transitional phase.”

At the end of the conference, Kabashi said that the military’s plan on June 3 had been to clear an area near the sit-in site known as “Colombia” – usually inhabited by drug peddlers – and that the TMC regretted what happened instead. 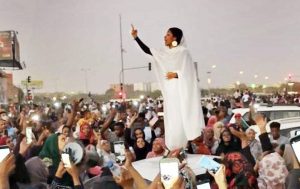 He said the findings of an investigation into the incident would be released on Saturday.

Kabashi also claimed “more than one coup attempt had been planned” against the TMC in recent days but had been thwarted, with “two groups of officers” taken into custody.

Kabashi’s comments came after protesters, who had staged a nationwide civil disobedience movement to demand civilian rule, agreed on Tuesday to end the campaign and resume talks with the generals.

Traffic jams have returned to downtown Khartoum and some shops in the capital’s famous gold market reopened on Thursday as more residents and office employees ventured out.

Fewer troops and members of the feared paramilitary Rapid Support Forces – accused by protesters and rights groups of leading the crackdown – were on the streets in downtown Khartoum, according to an AFP correspondent who toured parts of the capital.

However, they were deployed in force in the northern district of Bahari, a bastion of protests against the TMC and al-Bashir.

“Today is my first day to work after the campaign ended but I’m not in the mood to work,” Suheir Hassan, an employee at a government office, told AFP news agency.

“On my way, I passed by the sit-in area and remembered that all those voices who used to chant revolutionary slogans have now disappeared.”

Al-Burhan told the envoys that Sudan and its people had a positive view of US efforts to reach a political settlement, according to a statement released by the TMC.

Washington said Booth had been named to help craft a “peaceful solution” to the crisis that has rocked the country.

The Alliance for Freedom and Change umbrella protest movement said its leaders had briefed the two US officials on Wednesday on the need for a transparent investigation into the June 3 killings.

They also called for the withdrawal of “militias” from the streets in Khartoum and other towns, the lifting of an internet blockade and the establishment of a civilian administration, it said in a statement. 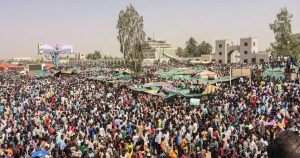 Commenting on these developments, Jeff Stacey, a former US state department official, told Al Jazeera that international pressure on the Sudanese military is necessary for negotiations to move forward.

“For Hemeti, the general, to actually blame the protesters is an extraordinary thing and makes it even harder for the leaders of the opposition to agree to terms and come back to the table.

“If they [the protesters] are being blamed directly after they suffered this massacre, we need not just investigations, we need heavy pressure from the UN, Security Council and secretary-general,” explained Stacey.

The African Union, which suspended Sudan following the crackdown, said global efforts were being made to resolve the crisis.

The US diplomats were also expected to meet top envoys from Saudi Arabia, the United Arab Emirates and Egypt in Khartoum. Experts say the three key regional powers back the generals.

Days after al-Bashir’s overthrow on April 11, Saudi Arabia and the UAE offered a $3bn aid package to Khartoum, including a $500m cash injection into the central bank to help support the Sudanese pound, which has plunged against the dollar.

The country’s worsening economic crisis was one of the initial triggers for protests against al-Bashir’s three-decade rule.

On Thursday, prosecutors charged him with corruption and “possessing foreign funds, acquiring suspect and illegal wealth” and putting in place a state of emergency, state media reported.

Last month, Sudan’s public prosecutor ordered the questioning of al-Bashir, who is being held in Khartoum’s Kobar prison, over money-laundering and “financing terrorism”.

Talks between the protest leaders and generals collapsed in mid-May over the question of who should lead a new governing body – a civilian or a soldier.

Relations worsened following the crackdown, with protest leaders now insisting any agreement reached with the military rulers must be backed by “regional and international” guarantees.