Morsi, martyrdom, and the intolerance of the biased

Majority of matters some sections of Muslims termed bidi’ah (innovations) in Islam are not truly so. Rather, they fall under Mas’alatun Khilafiyyah, which means issues of different opinions among Islamic scholars of yore. Hence, those who do those deeds have not committed errors, and those who do not are likewise safe, but condemning outrightly by denying the existence of other views is intolerance, which can lead to extremism if not curtailed. An example of such is whether it is permissible to ascribe martyrdom to the late Mohamed Morsi. Let’s hear what the scholars say.

The one who refrains from calling President Mursi a Shahid has no legitimate authority to dissuade those who differ with him,

Sh. Bakr Abu Zaid in his book (معجم المناهي اللفظية و فوائد في الألفاظ) had submitted that the usage of the word is very popular among the Salaf, thus there are valid reasons for its usage. 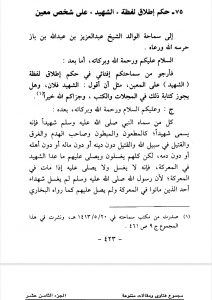 All the aforementioned scholars are giant master of hadith science who are very passionate about the Sunnah. The great Hadith scholar, Ibn Amar As- Shahid who died 317 AH, the author of the book ( علل الأحاديث في كتاب الصحيح لمسلم بن الحجاج) is popularly described as As Shahid because he was martyred by the Qaramitian sect. And in recent time Imam Ibn Badis had described Umar Mukhtar of Libya as Shahid.

Similarly Sh. Ibn Bazz was asked in his (Majmu Fatwa Vol 18 page 423 ) and he approved the Shahid usage. likewise the Permanent Committee for Scholarly Research and Ifta in Saudi Arabia (اللجنة الدائمة) were asked similar question on the usage of the word Shahid for individual Muslim martyr which was approved. The Fatwa was a joint scholastic declaration of Sh. Ibn bazz, Sh. Abdul Razak Affifi, Sh. Abdullah Ghudayyan and Sh. Abdullah al Quood. 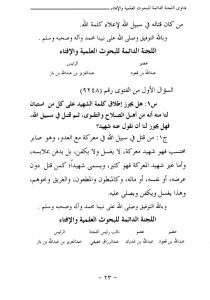 So creating unnecessary furore based on a specific opinion is very unnecessary and a manifestation of intolerance for the scholarly efforts of the scholars are based on understanding of the hadith on the subject matter.

I pray to Allah to accept President Mursi as a Muslim and as a Shahid and make Al Jannah his abode. I have screenshot the text of the Fatwa of Ibn Bazz and the Lajna Da’imah as it suffices for those uninterested in unnecessary polemics.