4th National Discourse of The Companion: Muslims tasked to participate in public affairs

Barely three weeks to the fourth edition of the annual National Discourse of The Companion, which centres on food security this year, Nigerian Muslims have been urged to take active interest in national development by engaging more in public service activities and charities.

This view was canvassed at a stakeholders meeting hosted by the Muslim Public Affairs Centre (MPAC Nigeria) during the weekend in Lagos to discuss strategies for ensuring maximum public participation at the forthcoming event, where Nigeria’s Vice President, Prof. Yemi Osinbajo will deliver the keynote speech.

The immediate past Governor of the State of Osun, Engr. Rauf Aregbesola is expected to chair the epochal event, which is slated for Sunday, 14 July at the Main Auditorium of the University of Lagos, Akoka, Lagos, Southwest Nigeria. 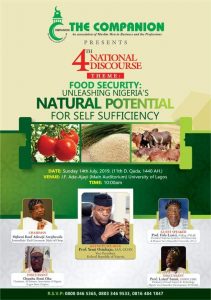 In his message to the stakeholders meeting, the Executive Chairman, MPAC Nigeria, Mal. Disu Kamor commended The Companion for its patriotism to Nigeria as demonstrated by consistently organising the National Discourse, now in its fourth edition to address germane national issues.

In the message delivered on his behalf by MPAC Director of Media and Strategic Communications, Ustadh Abdulwarees Solanke, Disu Kamor said it is an Islamic obligation that Muslims must seek the good of their country or wherever they find accommodation.

According to him, Islam is very strong in its mandate to Muslims to advocate for and support righteous causes that promote public safety, security and national stability.

In his message, the Lagos chapter chairman of Muslim Media Practitioners of Nigeria (MMPN), Mal Kabir Garba said the National Discourse tallies with the aim and objective of the Project Muslim VIP; Voice, Identity and Participation which his group is partnering with MPAC to implement.

He said the project seeks to promote qualitative participation of Muslims in public and global affairs to change the perception that Muslims are not forthcoming in contributing to national debates.

The representative of The Companion, an association of Muslim Professionals and businessmen, Mr Ismail Bello Ozugha explained that the Companion as an open Muslim organisation believes in partnership and synergy of Muslims to improve quality of life.

He said Islam and Muslims have a lot to offer in the resolution of most crises confronting humanity today and it is by harnessing resources in explaining and demonstrating best practices that the world can find peace.

According to him, this is what informed why The Companion extended its hands of fellowship to NGOs and Muslim public service organisations like MPAC and MMPN towards a successful hosting of the discourse

Other stakeholders who spoke at the meeting and applauded The Companion initiative include representatives media houses and independent producers like Aims Media Company Limited.