The Mudir (Proprietor) of Daru Da’wah Wal Irshad, Isolo, Lagos, Sheikh Ridwanullah Mustapha Zuglool Sanusi has expressed displeasure over the non-recognition of the certificates issued by the institution for further studies and at the labour market, while calling on Islamic scholars and all heads of Arabic schools in Nigeria to unite and put an end to the status quo.

The Mudir made this call while addressing thousands of guests from across the country and the 105 graduating students of the Madrasah for ‘Idaadiyyah and Thanaawiyyah at the Isolo area of Lagos State on Saturday and Sunday, 22nd and 23rd June.

Daru Dawah Wal Irshad is an Isolo, Lagos-based Arabic and Islamic institute established in 1970 by the late renowned historian and linguist, Sheikh Mustapha Zuglool Sanusi, who died in 2017.

The prominent institute has, over the years of its establishment, produced thousands of Muslim scholars across various fields of human endeavour.

According to him, “Since my assumption of office as the Mudir, I noticed that the certificates issued to our students after their graduation are not reckoned with in the society. They can’t use them to further their studies in any Nigerian University, while the Institute has international affiliations to universities across the world. Using them to gain employment in both government and private institutions in Nigeria is another issue.

“The certificates issued are equivalent to the conventional secondary school certificate. I hereby call on all heads of Madrasahs across the country, particularly in Lagos State, to come together and have an avenue where we would strategise and see how we can better our situation.” 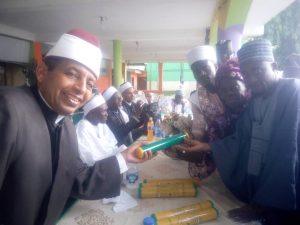 Addressing the 105 graduands, the Wakeel of the institute, Sheikh (Dr.) Ishaq Mustapha Zuglool Sanusi called their attention to the crisis rocking the Muslim community across the world, and advised them to be united and remain committed to the cause of propagating the religion.

The event reached the climax when the students were presented the certificates for the ‘Idaadiyyah (junior) and Thanaawiyyah (senior) categories.

Mallam Sulaiman Mustapha emerged the best graduating student of the institute and winner of the Asmau Bakare Award for the Best Graduating Student.

Mallam Sulaiman’s joy knew no bounds while receiving the award amidst family and friends.

In an exclusive interview with Muslim News, the Head Teacher of the institute, Ustadh Alhaji Mahmud Kolapo Raji called on the students not to relent in striving to further their studies.

In his words, “My advice for the students is that which our father, Sheikh Zuglool Sanusi usually gave during his time. Allah asked the Prophet (SAW) to always seek for more knowledge.

He further said, “I call on the parents to change their mindsets about Islamic Knowledge. We have many scholars who are doing well in their various fields. Look at Professor Lakin Akintola, Professor Bidmus, Professor Hamid Sanni, Professor Ishaq Oloyede, the JAMB Registrar. They all passed through the Madrasah and that built them to what they are today.”

“It is only an half-baked student that could be seen as nothing. Our father was knowledgeable and versed. That is why he is known all over the world. The parents should strive to help their children gain the knowledge and instill in them the fear of Allah,” he concluded.