The Almajiri Series (1) Beyond the Stereotypes By Aliyu Dahiru Aliyu

Many people, especially on social media where emotions cloud reason, believe an attempt to understand the Almajiri question is an effort to justify the system of sending young boys to distant locations to earn a living by roaming the streets with with bowls while begging. Almajiri is one of the most misunderstood systems in Nigeria, not only by the general public, but by the so-called experts and policy makers in general. Newspapers, which many self-proclaimed intellectuals uncritically depend on to source for information, do no justice to the Almajirai (plural. Singular: Almajiri) by making sweeping generalisations when describing the Almajirai and inflating figures to show that Northern Nigeria is a camp of child abusers with abandoned, unkempt boys.

I am not writing to beautify the Almajiri system, but to make the other side visible and to clear many misconceptions surrounding Alamjirai and the Quranic schools in Northern Nigeria. I came across many baseless claims by those who know little about the genesis of terrorism and the Boko Haram insurgency in Northern Nigeria attributing extremism to Almajirai. I also read many shallow articles from writers that understand nothing about the Almajiri calling for the abolishment of the system they see as synonymous with begging. They couldn’t spare time to understand that most beggars today are not Almajirai and instead of calling to abolish begging and reform the Almajiri system, they are calling for abolishment of an established system of spiritual education.

To the person who sees nothing good with the Almajiri system and advocates for its abolishment, Almajiri is nothing but a scruffy looking, dirty and destitute little boy moving through the nooks and crannies of the country begging for what to eat. They think their parents don’t love them or, due to the abject penury they suffer, give birth to the kids they can’t care for and therefore send them to cities to take care of themselves. After this half-baked, deceptive description, you would then find inflated figures of Almajirai in the pages of newspapers.

A friend of mine from the Southern part of Nigeria ignorantly claimed that there are over 10 million Almajirai in Kano alone! This means that more than half of the Kano population constitute Almajirai that are, to him, no more than beggars living in destitution. I was born in Kano, schooled from basic to advanced level in the state and started my first job in the city but all what my eyes could see is that Almajirai, no matter how I project the figures, are less than 10% of Kano people, and these constitute beggars and non-beggars among them.

When Governor Abdullahi Umar Ganduje claimed there are about 3 million Almajirai in Kano state, as reported by Punch newspaper, he had to back up his claim with another claim by recently saying most of them are not indigenes of the state. This is because the average Kano indigene would tell you that most parents don’t send their children to Almajirci (the Almajiri system). The psychosocial effects of seeing those who attend secular schools, who become more materially and spiritually successful than those who attend only Almajiri schools, make many parents, even in the villages, to reconsider taking their children to Almajiri schools without some level of secular education.

Let me not go further without discussing the dichotomy between Almajirai and beggars. There is a stark difference between the two. Almajiri is a Hausa word that has its roots from the Arabic word “Almuhajir”, meaning those who migrate from one place to another. In Islamic History, “Almuhajrun” are Prophet Muhammad’s Companions who migrated with him from Mecca to Medina while evading the hardships and torture they encountered in the hands of the pagans of Mecca. They also moved so as to be closer to the Prophet (SAW), so that they could have spiritual training in the hands of the Master (PBUH). The people of Medina that helped the Almuhajirun are called “Al-Ansar” (The Helpers), because they helped by providing them with not only food and shelter, but women to marry. 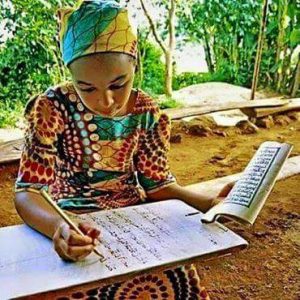 In Islam, Islamic scholars (Mallams, Sheikhs, Imams, e.t.c) are considered as the divine inheritors of the Prophets. They are seen as exemplary after the death of the Messengers. A person who moves from his location to another one in search of spiritual education is therefore seen as “Almuhajir” and those who help them with food and shelter as “Ansar”. They both think they are doing something that will be rewarded in the Hereafter. This kind of movement can still be found in the Sufi rituals of “Murid” and “Murad” in different locations. However, a system like Almajiri where Quran is the only book one masters can only be found in some West African countries like Morocco and Senegal. There is also a difference between Madrasahs and Almajiri Schools. In Northern Nigeria, Madrasahs look like Islamiyya schools, where not only the Qur’an but also many small books of Islamic education are taught, and can be found in cities mostly with students that combine secular and Islamiyya schools.

Many years back, when most Northerners used to be farmers, Almajirai did not go to beg or seek the help of a neighbour. They only help the Mallams in cultivating lands and the Mallams feed them in return. But as time changed and the rise in population affected the societies, the Mallams stopped farming and therefore Almajirai now have to go somewhere to beg for what to eat before joining classes.

… To be continued In sha Allah

– Dahiru Aliyu is a researcher on Religion and Violence. He works with Centre for Democracy and Development as a Program Officer (Research)