Of 4 successful peaceful protests carried out by Nigerian Muslims, 3 of them are for Hijab

In 2006, the Muslim Students’ Society of Nigeria, Lagos State Area Unit staged a successful protest at the Lagos State Secretariat to express their dissatisfaction over the blasphemous anti-Muhammad (SAW) cartoons. In fact, the former Governor of Lagos State, Senator Bola Ahmed Tinubu commended the students for their peacefulness and calm during the protest.

In 2012, millions of Nigerians staged one of the biggest protests in history across the country. The protest, organised by Occupy Nigeria, a socio-political movement, brought together many political, pressure and religious groups. Islamic organisations and scholars all united against the former president Jonathan’s removal of the fuel subsidy. 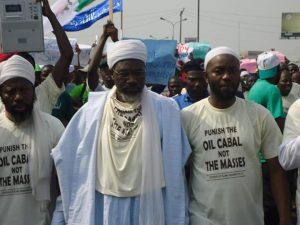 Entertainers also participated. It was one of the most organised and peaceful protests in Nigeria, which also saw Christians form human shields as Muslim protesters observed Solatul Jumah (Friday prayer) at the popular Gani Fawehinmi Square, Ojota, Lagos. Guess what? After days of nationwide protests, the Federal Government later listened to the protesters’ demand by reducing fuel price from around N141 to N97.

Thousands of Muslim students in Lagos secondary schools and higher institutions staged a mother of all protest against the molestation and assault of female students in Hijab by overzealous non-Muslim teachers. 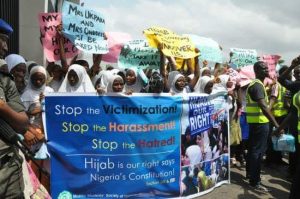 The carefully planned protest, led by MSSNLagos, was a peaceful demonstration to the Lagos State Government House and saw the students holding banners and placards, declaring: My Hijab, My Right, Muslims Say No to Oppression, Stop the Harassments, Stop the Hatred, etc.

Two Commissioners of former Governor Babatunde Fashola later held a meeting with the students’ representatives after peaceful protests which lasted more than 6 hours.

The news of now Barrister Firdaus Amasa’s Hijab saga with the Body of Benchers (BOB) angered many Muslims when it first hit the airwaves. Nigerian Muslims used all lawful means available to protest the refusal of the BOB to call Barrister Amasa to bar with her Hijab on. 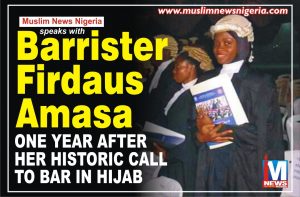 While some brethren staged a successful peaceful protest in Ilorin, Prof Lakin Akintola of MURIC also did a similar protest at the National Assembly, Abuja the day the public hearing on Firdaus and her Hijab was supposed to be held. By and large, the social media protest with the hashtag #JusticeforFirdaus, which was later joined by non-Muslim advocates, was instrumental to the reversal and eventual call to bar of Amasa with her Hijab 7 months after.

The aforementioned cases are few examples of peaceful protests successfully executed by Muslim organisations in Nigeria, as monitored by our correspondents.

Evidently, peaceful protest is undoubtedly one of the examples of freedom of expression and in a democratic government, unlike monarchies, every citizen has the right to hold protests, marches, rallies and demonstrations for or against the government.

Permission to protest is entrenched in Sections 39 and 40 of the 1999 Nigerian Constitution (as amended). Also, Article 11 of the African Charter on Human and Peoples’ Rights Act (Cap A9) Laws of the Federation of Nigeria 2004 guarantees same.

It is however advisable that the protesters should not go beyond the limits set by Allah and His Messenger on one hand, and by the constitution of their country on the other hand. Reason being that hoodlums might seize the opportunity to commit murder, arson and illicit acts.

Those among the Muslims who claim protesting is unIslamic will now be happy about the evils that have befallen the protesters, saying; “We warned them not to protest, but they didn’t listen.”

On this note, as long as we call on the Federal Government to obey the indicated court rulings and release Sheikh Ibrahim Al-Zakyzaky, the leader of the Shiites in Nigeria, at least for the sake of peace and security in the country, we condemn in strong terms the violent protests embarked upon by the members of the group. We at Muslim News would in no way support this kind of thuggish behaviour, all in the name of protests.

Protests must therefore be properly planned and devoid of assault, vandalisation or killings. If possible, protesters should get police escorts and other security personnel to prevent their protests from being hijacked by thugs, because several protests, including the Maiduguri protest in 2006, started peacefully before it was hijacked by touts who used the opportunity to attack and cause confusion for their selfish aims.