The Lagos State Rapid Response Squad Commander, DCP Olatunji Disu expressed appreciation for the courtesy visit by the representatives of the Guild of Muslim Professionals (GMP) to him, while urging the group and other Muslim bodies to reach out to their brethren, especially those in prisons.

DCP Disu, who was recently promoted to the rank of Deputy Commissioner of Police from ACP, extolled the group, which was led by its Head of Administration, Mr AbdulKabir Sulaimon for its presentation of a giant greeting card, which had pictures of him, his wife and the immediate past Governor of Lagos State, Mr Akinwunmi Ambode during his decoration.

The giant complementary card also featured signatures, congratulatory messages and a picture of DCP Disu and top executives of the Guild during the 2018 GMP Convention in Lagos. 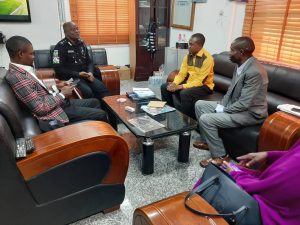 In his remarks, DCP Disu said, “Thank you for doing this for me. It is an eye opener and I am really excited. It’s not about the card but the love showered on me. I am highly appreciative, more importantly because Muslims don’t look out for their fellows.

“There are a lot of Muslim inmates who are in prison; their Muslim brothers don’t look out for them.”

He praised the organisation for its laudable programmes, particularly the annual Convention of Muslims in different professions, which he attended twice as a guest lecturer. 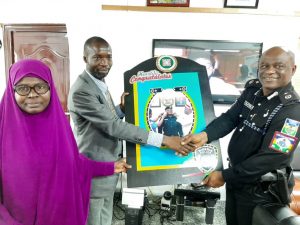 Mr Sulaimon thanked DCP Disu for opening his doors to them, and commended him for the good work he is doing in boosting security of lives and property, as well as combating crime on Lagos highways.

“He is great man; friendly, jovial and hardworking, and a committed officer. Not only that, he doesn’t hide his Islam. He also relates with everyone irrespective of religious affiliation and ethnicity. May Allah continue to be his guide and grant his desires.”

The GMP chief further assured DCP Disu that many Muslim organisations now pay visits to prisons, and he reiterated that such visitations are part of the objectives of the GMP. He further promised to help change the narrative by increasing GMP’s visitations to the prisons and caring for Muslim prisoners.