19 year old Abubakr AbdurRazaq from Oyo State has emerged the winner of the 3rd edition of the annual National Qur’an Competition organised by The Muslim Congress (TMC).

He was adjudged the best by a team of eminent judges led by Ustadh AbdulHafeez Ariremako, scoring 97% while the runner up, Atukale AbdulQuadr representing Lagos State came closely behind him with 95.7%.

The Chief Judge of the competition, Haafiz AbdulAfeez AbdulAzeez Ariremako, the Proprietor of Al-Qurraa Tahfiz School, Ibadan praised all the contestants for their beautiful recitations and memorisation of the last Juz of the Noble Qur’an (Suratul Ahzaab to Naas), saying that they all performed excellently, even better than previous years.

He advised all Muslims to return to the Qur’an, and established that the Qur’an will be a rescue for its lovers in this world and the Hereafter and a punishment for those who desert it. Haafidh Ariremako also emphasized that the essence of the revelation of the Qur’an is for mankind to live by it and practise its teachings.

The guest lecturer, Sheikh AbdulHadi AbdulGaniyy said deserting the Qur’an and its golden teachings is the root cause of the plethora of challenges facing the world, saying that the problems cannot be solved except we return to the Qur’an.

Speaking on the topic, “Qur’an: Cure for all ailments”, the Sudan-trained scholar started by seeking prayers for today’s Muslims who have severed their love for the Qur’an and deserted it.

He emphasised that all the societal problems affecting Nigerians today cannot be healed except with the Qur’an. He established the saying of the Prophet (pbuh), who said “The Qur’an is the cure to all ailments”.

He further divided ailments into that of the body and the soul, the latter of which is the most dangerous.

“The first task of Prophet Muhammad (peace be upon him) was to heal the society from the diseases of their souls.

“The Qur’an in itself is an unequivocal healing to all ailments because it is the word of the Fashioner of everything. However, Muslims don’t use the Qur’an to cure the world again, when the Qur’an should have been a universal cure to all problems”, he said.

He explained how the Qur’an healed Umar bn Khattab, who was at the early stage of his life a staunch enemy of truth.

“He only recited a portion of Suratu Taha while on the verge of going to kill the Prophet and he was thereafter guided to the light”, Sheikh AbdulHadi said.

He further urged Nigerian Muslims to go back to the Qur’an, support the government with the Qur’an and preach the Qur’an in the mosques, streets, buses, and workplaces to heal the people.

He also advised the participants to have good intentions, act with the messages of the Qur’an, represent Islam well and never forget to constantly revise it.

The competition is part of our commitment to reviving Islam – Amir

In his welcome address, the Amir of TMC, Dr Lukman AbdurRaheem thanked the guests who came from far and wide, saying, “this competition is part of our commitments to reviving Islam and its fundamentals in the contemporary times, when all attention has been captured by materialism, frivolities and perversions.” 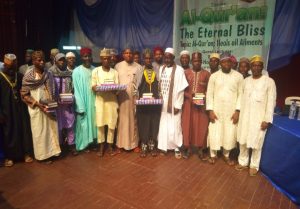 Important personalities who graced the occasion include the Supervisor for Works in Agbado Okeodo LCDA, Alh. Hon. Abdurrasheed Ajulo, who was the chairman of the occasion.

Alhaji Ajulo appreciated the efforts of the society and attested to the drastic moral decadence of the society, while asserting that only the Qur’an can teach morals best.