74 years after Hiroshima: Has the world learnt its lessons?

Today, August 6, 2019 marks exactly 74 years of the infamous atomic bombings of Hiroshima and Nagasaki in Japan by the United States of America, during the final stage of World War II. The two bombings (first, on Hiroshima on August 6, and second on Nagasaki on August 9) killed over 200, 000 people instantly; and remains the first and only use of nuclear weapons for warfare in the history of mankind.

Within the first two to four months of the bombings, the acute effects of the nuclear fall-out killed 90,000–166,000 people in Hiroshima and 39,000–80,000 in Nagasaki; while roughly half of the deaths in each city occurred on the first day.

During the following months, large numbers died from the effects of burns, radiation sickness and other injuries, compounded by illness and malnutrition. In both cities, most of the dead were civilians, although Hiroshima had a sizable military garrison. 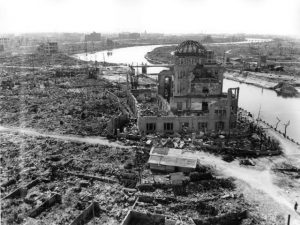 The bombings were so devastating and catastrophic that the pilot that dropped the first atomic bomb, Paul Tibbets lost his cool after seeing the results of his handiwork and for several years, experienced series of strokes and heart failure, before he eventually died in 2007. Yet, Tibbets said in an interview that he had “NO REGRETS” killing hundreds of thousands of innocent people during the apocalyptic mission.

The United States of America has also justified the bombings, just as many residents in the Japanese city of Hiroshima, numbering about 50,000 including representatives from 90 countries and regions, gathered today (Tuesday) at the Peace Memorial Park near Ground Zero to honour the victims and commemorate the 74th anniversary of the world’s first and only use of the atomic bomb in warfare.

According to the Pew Research Centre, “56 percent of Americans think the use of the atomic bomb against Japan was justified and necessary to end the war.” 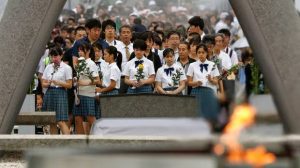 However, many academic luminaries, including the renowned British analytic philosopher, Gertrude Elizabeth Anscom termed it a war crime and a crime against humanity. She went further to describe the then U.S. President Harry Truman as “a murderer and war criminal for giving the order to turn the two cities to into powder and ashes”.

But has the US tried or convicted anyone for the murderous mission, even it was obvious that the Japanese had already been defeated and ready to surrender? Absolutely No! Why? The culprit was the ‘almighty’ America, Yet, the “world’s police”. the late Saddam Hussein of Iraq was indicted by the same America for allegedly using chemical weapons to exterminate the Kurdish population during the Anfal operations in the 1980s.

This actually shows the double standards of the West. The world powers, including the US, have the right to build atomic bombs and weapons of mass destruction, yet it is unlawful for Iran to develop same, even when Tehran says its nuclear program is a peaceful one. 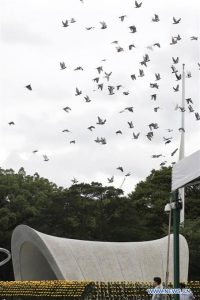 Apart from Tehran, many nations, including apartheid Israel, have continued to research and stockpile nuclear weapons despite numerous efforts to reduce or eliminate them. It is thus very disappointing to hear that the UN is very selective in the disarmament process.

Israel, for instance, has never admitted or denied the nuclear weapons story; but many observers and researchers believe that Tel-Aviv is the only country in the Middle East with such nuclear arsenal, and had in fact tested them in the past. 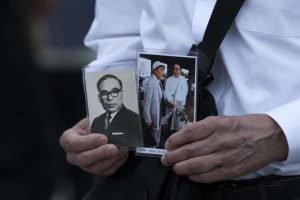 Interestingly, the Goldstone report acknowledged that Israel used the chemical, which indeed amounts to a war crime. The United Nations indicted Israel but unfortunately, failed to punish the country that has a huge record of human rights abuses because of the United States’ unconditional support for the apartheid state.

There were evidences that Al-Assad’s regime used chemical weapons against civilians in 2013 during the long running uprising turned civil war. Although Assad denied using the dangerous weapon, saying, “There has been no evidence that I used chemical weapons against my own people”, it must be stated that over 400, 000 Syrians have lost (according to UN figures) their lives to the 8-year war, with no end in sight.

Chemical weapons are dangerous and harmful, not to humans alone, but to animals, plants and the planet in general. Imagine the blood of people shed in Hiroshima and Nagasaki seventy four years ago? Imagine the numbers of people that lost their loved ones? Imagine the children that became orphans as a result of those actions?

The time is now for every country, including the superpowers, to abolish the evil of nuclear weapons and live a world without war as advocated by the Japanese Prime Minister, Shinzo Abe, who called for “a world free of nuclear weapons” during the Hiroshima/Nagasaki memorial ceremony held today.

– Rasheed Abubakar is the publisher of Muslim News and the author “Muslims and the Threats of the Media”.