Respected Muslim leader and Baba Adinni of Lagos, Sheikh Afeez Abou is glorifying Allah for sparing his life to witness yet another memorable year on earth as he clocked 97 years today, Saturday, August 10, 2019.

Coincidentally, as more than 2 million Muslim pilgrims are descending the Mount Arafat today, being the peak of Hajj rites in Makkah, Kingdom of Saudi Arabia, a special prayer is being organised for the erudite Muslim scholar at his mosque in Surulere, Lagos.

On behalf of the Muslim News team, I congratulate our father, teacher and mentor on this important milestone, and commend his contributions to nation building, promoting Islamic scholarship and engendering the unity of Muslims.

Although it is part of our inglorious culture in Nigeria to celebrate personalities only after their deaths, our culture as Muslims should not be so.

We must not wait for our revered scholars to die before we celebrate them.

Some would however argue that just like teachers, since scholars – especially those who uphold the tenets of the Sunnah – are expected to be rewarded with “Jannatul Firdaus” by Allah; with or without biographies and media mention, celebrating them is unnecessary.

I say that is not in doubt, but it is important for us to have written citations and chronicles of all our scholars, so as to be able to relate their struggles for the Deen (Islam) to our children and the generations after us. 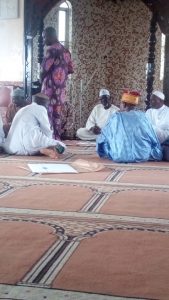 The Companions of the Prophet (peace be upon him) made efforts to compile the Noble Qur’an more than a thousand years ago. With honesty and sincerity of purpose, they also documented the Hadith, with the generations that came after them classifying Hadith into grades (Sound, Good, Weak and Fabricated), to ensure the guidance of future generations.

We have learnt (via visual, audio or text) the beautiful stories of the best generation of Islam (Sahabah), those who followed them (Tabi’un) and those who followed those (Tabi al-Tabi’un); may Allah be pleased with them all. Who is going to tell ours to our children and the generations that will come after us?

Where are the Muslim Biographers, Journalists and Creative Writers? Are we going to remain idle and watch our scholars and heroes die without writing about them? Muslim columnist, is anything wrong with us?

We have scores of them all over the country – across the states. It is a privilege for us to be learning directly from them now but must we let their lives and times go the way of Sheikh Isa Yagbo-Yaju, Sheikh Al-Arazim Alaya, Ustadh abdulLateef Adebowale, Prof AbdulHakeem Mobolaji and the fearless Alfa Bisiriyu Apalara, who was brutally murdered by a group of blood-thirsty Oro cultists in January 1957.

Although Wikipedia did a brief mention of late Apalara, there is need for a well-researched and detailed documentation of his life and death, and that of others who have gone to meet their Lord; ditto for the living.

At 97, Sheikh Afeez Abou, the Baba Adinni of Lagos is still committed to Islam and the unity of Muslims in Lagos and Nigeria.

During the last Ramadan, a friend of mine narrated how Sheikh Abou stood throughout the ten lengthy rakaahs of Taraweeh, led by three Hufaaz (those who have memorized the whole Noble Qur’an) in his mosque at Bank Olemoh, Surulere.

My friend, who is in his early 30s, was about leaving the mosque after the fourth rakaah when he saw the Sheikh at his regular corner standing firm on the prayer. He then asked himself; “What’s my excuse if this old Sheikh (aged 97) could stand all through the Solat?”

He felt ashamed and returned to the safu (row) to continue his Solat. After all, we are all seeking for the same Paradise with Allah. May Allah continue to sustain our Sheikh and his likes upon Haqq (Truth).

– By Rasheed Abubakar, the publisher of Muslim News