“All actors of the international community and in particular the UN should provide complete support to the Palestinian people beyond more promises,” Turkey President Recep Tayyip Erdogan said.

“Israel, which was almost non-existent in 1947, has continued until this day to seize Palestinian land with the aim of eliminating the state and the Deal of the Century will support those territorial ambitions,” Turkey President Recep Tayyip Erdogan told the United Nations General Assembly on Tuesday.

“Where are the borders of the State of Israel? Is it the 1947 borders, the 1967 borders or is there another border that we need to know of?” Erdogan asked, alluding to Netanyahu’s plan to expand Israeli sovereignty to West Bank settlements.

Erdogan held up four maps to illustrate his point, with the Palestinians in green and Israel in white, to demonstrate Israel’s changing border from 1947 to today.

Erdogan also spoke against the US recognition of Israel’s 1981 annexation of the Golan Heights.

“How can the Golan Heights and the West Bank settlements be seized just like other occupied Palestinian territories before the eyes of the world?” Erdogan asked.

He accused the Trump administration of wanting to destroy Palestinian statehood with its unpublished plan to resolve the Israeli-Palestinian conflict.

“Is the aim of the initiative to promote, as the ‘Deal of the Century,’ to entirely eliminate the presence of the state and the people of Palestine? Do you want another bloodshed?” Erdogan asked. “All actors of the international community, and in particular, the UN, should provide complete support to the Palestinian people beyond more promises.”

Erdogan did not speak of the refusal of the Arab countries to accept UN General Assembly Resolution 181, the 1947 partition plan that would have created both Jewish and Palestinian states. Nor did he speak of Jordan’s attack against Israel during the Six Day War – despite Israeli pleas to King Hussein to stay out of the fighting – in response to which Israel wrestled control of the West Bank.

The Turkish President then pointed to the map and said, “Look, this is 1947. The land of Palestine. There is seemingly almost no Israeli presence on this lands, the entire territory belongs to the Palestinians.” 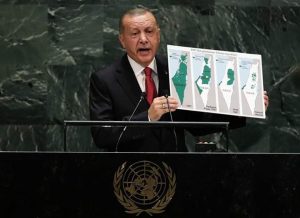 He said that 1947 was the year that the “Palestinian land starts shrinking and Israel starts expanding” and added that “Israel is still expanding and Palestine is still shrinking.”

He called on the UN to take action and enforce its many resolutions against Israel, as “Israel is still willing to take over the remainder of the land,” according to Erdogan.

Israel and the US, he said, were busy “intervening and attacking the historical and legal status of Jerusalem, and holy sacred lands and artifacts,” Erdogan said.

The Turkish President said he supported a two-state solution on the pre-1967 line and warned the US that any other resolution would not work.

“Any other peace plan other than this will never have a chance of being fair [and] just, and it will never be implemented,” Erdogan said. “Today, the Palestinian territory under Israeli occupation has become one of the most striking places of injustice.”