Few days before the commencement of the 74th United Nations General Assembly (UNGA) held this week in New York, the Nigerian media was awash with the news that the fugitive leader of the proscribed Indigenous people of Biafra (IPOB), Nnamdi Kanu would be attending the meeting that had in attendance more than 90 world leaders, including Nigeria’s President, Muhammadu Buhari.

It was a press statement signed by the outlawed group’s media and publicity secretary, a certain Emma Powerful, which was syndicated in many top newspapers and pro-IPOB propaganda media (both print and online) in Nigeria.

The Nation headline of Monday, September 23, read, Nnamdi Kanu leads delegation to US for UN General Assembly. For Nigerian Tribune, it was IPOB: Kanu to lead members to United Nations General Assembly and 74th UNGA: IPOB reveals why it will protest against Buhari in New York as published by Daily Post. 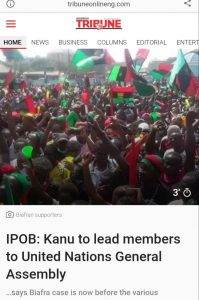 “Barring any last-minute changes, the leader of the outlawed Indigenous People of Biafra, Nnamdi Kanu, will lead members of the group to the ongoing United Nations General Assembly in New York today.”

Interestingly, the journalists who reported the news for the newspapers were all of Ibo ethnic extraction, filed their reports from Abakaliki, the capital city of Ebonyi State and Awka, the capital of Anambra State – cities known to have members of the terrorist group. 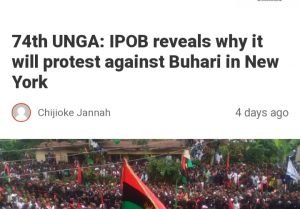 In fact, some pro-IPOB media outlets engaged in a hatchet job when they alleged that Nnamdi Kanu boasted that he would confront President Buhari at the floor of the UNGA meeting.

The ndigbo news for example, used this headline: ‘I Will Confront Buhari At 74th UNGA, New York – Nnamdi Kanu Boast’

The IPOB propaganda machinery promoted a poorly scripted and bogus pseudo itinerary of Nnamdi Kanu at the summit, stating that “He is scheduled as number five-speaker (sic) on the first day of the debates – another plus for the country as most world leaders will be listening in the General Assembly Hall, while the global audience watches on live television.”

Muslim News checks revealed that as at today (Friday, September 27), there was no single report (picture or video, real or photoshopped) to show that the fugitive either attended the just concluded meeting or was even anywhere near the US. All the speeches delivered by the world leaders, including the Nigerian delegation led by President Buhari had made news, without anyone attributed to either Nnamdi Kanu or IPOB. 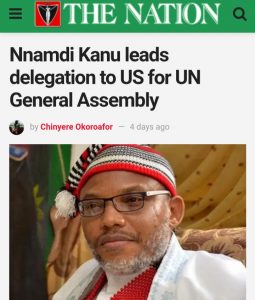 While reacting, a Nigerian columnist, Temitope Ajayi said; “I struggle, daily, to understand how outlawed organisations like IPOB….will just concort fairy tales and make outlandish claims that offend basic common sense into press statements, send same to media organisations and the next thing you see are banal headlines from even mainstream legacy media houses.” 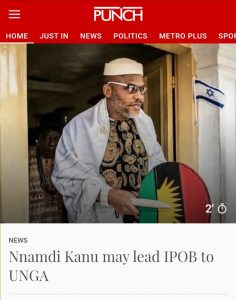 “I begin to wonder if editors and sub-editors don’t even ask questions again before press statements are published,” he added.

Muslim News publisher, Rasheed Abubakar said the authenticity of the claims in the release could have been subjected to verification in accordance with media ethical conduct before going to press.

Abubakar also referred to the Qur’an 49: 6, where Allah strongly warns, “O you who believe! If a Faasiq (liar — evil person) comes to you with any news, verify it, lest you should harm people in ignorance, and afterwards you become regretful for what you have done.”

Can Nnamdi Kanu give a speech at UNGA?

Although there was no evidence that Nnamdi Kanu attended the UNGA, investigations carried out by Muslim News revealed that an individual who has positive agenda that will drive the world positively can be invited to give a speech by the Secretary General.

Further findings by this newspaper showed that individuals who represent special interests particularly on the sustainable development goals can be allowed to make a speech at the General Assembly on the challenges and way out.

The teenage right activist was invited to speak at the UN general assembly hall at the summit and she gave a passionate speech directed at world leaders, chastising them for inaction and leaving the crisis for the next generation, as reported by multiple international media.

“As at today, there is no evidence that Nnamdi Kanu was at the UNGA but if the United Nations had allowed him, he would have been in attendance, because he is representing an interest agitating for a sovereign State,” a lecturer at the Department of Mass Communication, University of Benin said in a phone interview with Muslim News.

The source who doesn’t want his name mentioned said, “If you followed the Israeli/Palestinian case, the Palestinians have been asking for their state and Israel refused. They have a leader, Mahmoud Abbas and he has been allowed to present (his speech) at the UN General Assembly overtime. If Nnamdi KANU had been able to project his group properly, and he wants to address the United Nations, he can do so if the Secretary General allows.”