Mothers of the rescued boys back school’s harsh methods, torture

In a move that could be described as startling, some parents of the freed 300 male children allegedly chained, tortured and sexually assaulted at an Islamic school in Kaduna have protested against the police for putting their children in protective custody.

The protesters, mostly women and who openly backed the operators of the school and their methods, asked the police to release their children immediately.

They insisted the allegation by the police that the children were being sexually abused at the Islamic school was false.

Some of the mothers said there was nothing wrong with the Islamic school, wondering why the police decided to raid it.

The Kaduna State Command of the Police had on Thursday raided the Islamic school located in Rigasa, Igabi Local Government Area of the state, freeing 300 male children in the process.

The police said some of the victims were from Burkina Faso, Mali and other African countries, adding that the students confessed to have been abused homosexually.

Some other victims were said to have been subjected to daily recitation of the Holy Quran and prayers with torture.

“The man who is operating this home claimed that parents brought their children here for rehabilitation. But, from the look of things, this is not a rehabilitation centre. No reasonable parent will bring their children to this place,” the Kaduna State Commissioner of Police, Ali Janga, had said during the raid. 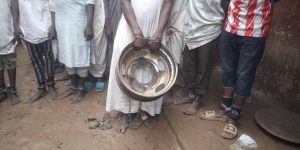 Some of the boys and men were said to have been held captive for years inside what could be described as a ‘building of horrors’, which was advertised as an Islamic school.

Some of the victims, as young as five years old, said they were tortured, sexually abused and starved and while being prevented from escaping.

Many of them had metal chains around their ankles and visible injuries.

One of those who were saved by the police alleged that some victims had died.

The police arrested seven teachers of the Islamic centre, including its proprietor, Mallam Ismaila Abubakar, who insisted all they did at the centre was the teaching of Islam.

“All those allegations of torture, dehumanisation and homosexuality are false and mere allegations. We do nothing here other than teaching people Islam,” he said.

However, on Friday, some mothers of the freed children protested against the police, saying they wanted their children reunited with them.

One of them, Maryam Fatika, whose four children attended the centre, said there was nothing wrong with the school, wondering why the police decided to raid it.

According to her, none of her children had ever complained of any form of maltreatment.

Fatika said, “We are aware that they (children) are being punished whenever they do wrong because they are dangerous and stubborn children. 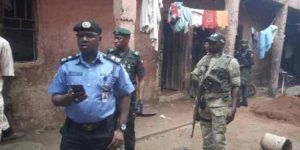 “There is nothing wrong with the school because we took our children there by ourselves. So, we don’t know why the police raided the place.”

Another woman, who identified herself as Mama Jibril, said her son had spent six years at the centre.

According to her, there is nothing wrong with the centre.

She said she sent her son to the centre because “Jibril was becoming a threat to the family.”

She said, “We took him to the Islamiyya school for rehabilitation and to God be the glory, he has changed.

“I visited him and I have never seen anything wrong going on in the school.

“We don’t even know where they (police) took our children. We are appealing to the government and police to return our children to us and we are also okay with the way the children are being handled by the Islamiyya authorities.”

Shafa’atu Zakari, who said she had six children in the school, said the children were drug addicts and uncontrollable.

She said, “That’s why we took them to the school to acquire Quranic knowledge.

“We took the children to the school because we didn’t know what to do with them. Presently, four of my children are among the students taken away by the police.

“We demand their release because the founder of the school, Mallam Ismail, is doing everything possible within Islamic teachings to rehabilitate them for us.”

Some residents of the area where the centre is located also claimed some of the students were drug addicts.

Ahmed Balarabe, who lives close to the school, denied the children were being sexually abused. 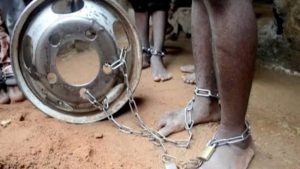 “Being a neighbour that always enters the school, if such thing was happening, I should have known.”

Speaking on the incident, the Police Public Relations Officer in Kaduna State, Mr Gambo Isa, said the command was still taking the details of the children rescued from the facility, adding that the owner of the school and six teachers were still being held.

He said, “Investigation is still on. We are trying to compile the list of the children. The facility is like a school and it has been operating for some time. From the information we got, the children were kept there; they (the suspects) operated it like a school.

“We got intelligence and went there. Seven suspects – the owner of the place, Ismaila Abubakar, and six others who act as teacher – have been arrested. Chaining them is what we are saying is illegal. You cannot chain human beings just because you want to punish them.”

Meanwhile, one of the Islamic centre’s directors, Mohammed El’Zubair, has denied the allegations by the police.

“No responsible father would take his child to where he would be molested sexually.

“We expected the police to investigate us well before invading the school.

“So, we are seeking justice from the authorities concerned and we leave everything to God who knows what we are doing,” he said.

El’Zubair listed public figures who had visited the centre in the past to include a former Kaduna State Commissioner of Police, Abdurrahman Ahmad; Islamic scholar and preacher, Dr Ahmad Gumi; the Chief Imam of Sultan, Bello Mosque; and ex-Lagos State governor, Gen Buba Marwa.