State governors have spent billions of naira from public coffers to sponsor people on religious pilgrimages this year, investigations by Daily Trust have shown.

Many of the states are still owing workers after receiving bailout funds from the Federal Government to offset outstanding salaries and pensions.

Daily Trust investigations reveal that most of the states sponsoring pilgrims are grappling with abandoned and new projects that require serious attention.

The minimum cost of a seat for this year’s Hajj which was completed recently was N1.5m. A seat for the Christian pilgrimage starts from N710,000.

Although some governors had openly declared that they had stopped sponsoring pilgrimages, findings show that many of them have indeed continued deploying state resources in that direction.

Over 65,000 Muslim pilgrims performed this year’s Hajj in Saudi Arabia. There is no exact number of the total Christian pilgrims for this season.

Findings in Plateau show that the state government spent over N2bn in sponsoring Muslim and Christian pilgrims in the last two years. 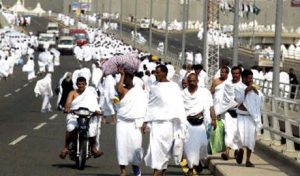 Daily Trust reports that 1,195 Muslim pilgrims travelled to Saudi Arabia for the 2019 Hajj, out of which 630 more than half the number were sponsored by the state government.

Although the Chairman of the Plateau State Christian Pilgrims Board, Rev. Yakubu Pam, said the 2019 list for Christian pilgrims was not yet ready, it was gathered that 1,707 pilgrims had been penciled for the December, 2018, trip to Jerusalem which spilled into 2019.

Gov. Simon Lalong had during a farewell service in December, 2018, announced that of the 1,707 intending Christian pilgrims, only seven were self-sponsored, saying the bills of 1,700 were shouldered by his administration.

The state government paid for 1,200 and the remaining 500 pilgrims were sponsored by the local government areas.

The Executive Secretary of the Plateau State Christian Pilgrims Welfare Board, Rev. George Gorap, had during the farewell service for the intending pilgrims, revealed that each seat to Jerusalem cost the government N850,000.

Based on that figure, it was estimated that at least N1.4bn was expended to sponsor the 1,700 pilgrims.

Although Gov. Lalong had received commendations after he lifted an embargo initially placed on government sponsorship of pilgrimages, critics believe that the over N2bn spent recently should have been used to initiate or complete major projects in the state.

An observer said, “Most of those sponsored for the pilgrimages have the money to sponsor themselves. They were given the seats based on patronage, and nothing more.

“The Plateau State Multi-Purpose Sports Complex is yet to be completed and needs at least N1bn. The governor should have channeled the money there. The 2019 approved budget has N1bn earmarked for the stadium even though the House of Assembly had in 2018 approved a N1bn loan for its completion.”

Daily Trust gathered that about N193,880m was spent by the state government to sponsor 131 pilgrims to Saudi Arabia for the just concluded Hajj.

Pilgrims from the state paid N1,480,000 per seat. The amount covered Basic Travelling Allowance (BTA), accommodation in both Makkah and Madinah, visa fee, uniform, two bags, feeding, among others.

Among the 131 pilgrims sponsored by the state government, 12 were members of the Amirul Hajj (leader of delegation), four served as guides, four were preachers and three were journalists who covered the exercise.

The remaining 111 were political office holders, including the Speaker of the House of Assembly and eight members. Sources said the remaining 16 members of the state assembly, who were given a seat each, donated same to their relatives and friends.

While in Saudi Arabia, Gov. Muhammad Inuwa Yahaya reportedly approved SR300 (equivalent of N30, 000) to each of the 1,447 pilgrims that participated in the Hajj.

About N148m was spent to sponsor 1,692 pilgrims for the 2019 Hajj in Saudi Arabia, according to Solomon Kumangar, who is the Director General, Media and Communication, Government House, Yola.

According Kumangar, 1,692 pilgrims, including 50 officials, were sponsored for this year’s Hajj. Although he could not give figures for the total number of Christian pilgrims to Jerusalem scheduled to hold this year, Kumangar noted that the administration of Gov. Ahmadu Umaru Fintiri realised that government could not sustain the expenditure in the face of growing need for infrastructure.

He said, “The N148m spent on this year’s pilgrimage can build five schools. It has serious economic implication. So, the governor feels that pilgrimage should not be bankrolled by government.”

This was confirmed by Rev. Father Bob Etta, the Special Adviser on Religious Affairs to Governor Ben Ayade. Fr. Etta said each of the 50 pilgrims was given $800 (288,400.00) as BTA, noting that the governor had promised to give same support to the Christians who would be undertaking pilgrimage to Jerusalem in November.

In Yobe, it was gathered that the state government sponsored 97 ulamas and officials to Saudi Arabia for the 2019 Hajj. The Executive Chairman of the Yobe State Pilgrims Commission, Alhaji Bukar Kime, said the ulamas were sponsored to pray for peace and tranquillity in Yobe and the country.

In Ogun, over N120m was reportedly spent in sponsoring Muslim pilgrims to the just concluded Hajj in Saudi Arabia.

Multiple sources told our correspondent that the government sponsored at least 80 pilgrims, excluding members of a 10-man ad hoc committee on Hajj, and some officials of the state Muslim Pilgrims Welfare Board.

Over N100m was spent by the state government on this year’s pilgrimage to Saudi Arabia, according to Aminu Abdullahi Abubakar, who is the director of press to the deputy governor.

Abubakar explained that the pilgrims paid their fares, but that the state government took care of their feeding and medical expenses.

He, however, said it was the state government that sponsored officials, guides and Islamic scholars who accompanied the pilgrims.

A total of 3,496 pilgrims performed this year’s Hajj from Sokoto.

More than 50 Muslim faithful were sponsored by the Kebbi State government for this year’s Hajj.

The figure is twice the number of those sponsored last year.

According to government sources, over N300m was expended on the sponsorship of the over 50 people.

In Benue, over 700 people preformed this year’s Christian pilgrimage, out of which at least 300 were reportedly sponsored by the state government.

The heads of the Christian and Muslim pilgrims’ boards could not be reached for comments as several efforts  to reach them did not yield results.

Alhaji Dambo who spoke with our correspondent on phone while he was in Saudi Arabia, said the sponsored pilgrims included 10 health personnel, 20 operational staff, 15 ulamas and many others.

On what the government spent to sponsor the pilgrims, he said he could not give the total amount, but said N1,484,388. 55, was paid for each of the pilgrims, and added that estacode (which is higher than BTA) was paid to some highly placed officials.

A source at the Nasarawa State Muslim Pilgrims Welfare Board (NSMPWB) said the state sponsored 150 pilgrims to this year’s Hajj at the rate of N1,448.50. per pilgrim.

The pilgrims included the leader of the delegation and his entourage, officials of the board, doctors, nurses, imams, guides and some politicians, the source said.

He said the new administration had frowned at sponsoring many people with state funds, saying the new governor would not succumb to pressure to waste state resources on religious pilgrimages.

Islamic clerics, health officials, journalists and other supporting staff were some of the people sponsored by the state government for the 2019 Hajj. 1,985 pilgrims performed this year’s Hajj from the state.

Daily Trust gathered that the state governments only sponsored officials of the Muslim and Christian pilgrims’ boards. In Edo State, 130 pilgrims performed this year’s Hajj and each of them was paid N1,480,000.

It was gathered that on its part, the state government sponsored officials of the Muslim pilgrims’ board, the amirul Hajj and his entourage, doctors and nurses.

In the Federal Capital Territory (FCT), the Director, Muslim Pilgrims Board, Mallam Bashar Nasarawa, said they only sponsored 18 persons out of the 2,236 pilgrims that performed this year’s Hajj.

Mallam Nasarawa said, “We took 2,236 pilgrims to Saudi-10 medical personnel and eight officials. We had a total allocation of 2,712 seats by NAHCON. The contingent has performed the Hajj and returned to Nigeria.”

The Public Relations Officer of the Kaduna State Muslim Pilgrims Welfare Board, Malam Yunusa Abdullah, told Daily Trust that the state government stopped sponsorship of pilgrims to Saudi Arabi in 2015.

Malam Abdullah said, “When the present administration assumed office in 2015, it cancelled all state government sponsorship of pilgrims to Saudi Arabia and also cancelled the amirul Hajj team.

“From 2016 to 2018, the Secretary to the State Government (SSG), Lawal Yakawada, has been leading the government delegation.

“However, in the just concluded 2019 Hajj exercise, the Director General of the Bureau for Interfaith, Jamilu Abubakar Albani, led 55 government officials, including a medical team, media, ulama’s and welfare guides.

“They were sent purely to assist the pilgrims. This was unlike in the past when people were sponsored by the government. This government felt since the pilgrimage is an act of worship, and it is only for those who have the means and health, such people should pay from their pockets if they want to go on pilgrimage.”

Apart from the 48 officials that formed part of the state contingent for this year’s Hajj, officials said the Jigawa State government did not sponsor anybody.

The Executive Secretary of the Jigawa State Muslim Pilgrims Welfare Board, Mohammed Sani Alhassan, said those sponsored included six medical staff, two journalists, eight from the Hajj committee, one security personnel, six preachers and 25 staff of the board.

In Kogi, findings indicate an embargo was placed on government sponsorship of pilgrimages. The Chairman of the Oyo State Pilgrimage Board (Muslim Wing), Prof. Sayed Hamzah Ayantunde Malik, said the state government did not sponsor anyone for the 2019 pilgrimage as being speculated.

Similarly, the Christian wing of the pilgrimage board also said it did not receive any memo of sponsoring intending pilgrims to Jerusalem.   Lagos In Lagos, the state government ceased sponsorship of both Muslim and Christian pilgrimages since 2015.

It was learnt that the state government usually sponsored 25 pilgrims from each of the 57 local governments and local council development areas.

A former President of the Youth Wing of the Christian Association of Nigeria (CAN), Pastor Simon Abu Dolly, said he did not see anything wrong with government sponsoring pilgrimages.

Pastor Dolly said, “Apart from the spiritual benefits for individuals, sponsoring pilgrims to the holy lands is also beneficial to the nation.”

The Missioner, Ansar-Ud-Deen Society of Nigeria (ADSN), Abuja, Dr. Musa Olaofe, told Daily Trust that government sponsoring some individuals might not be a bad idea if their roles were to guide the pilgrims.