‘He was a pillar of Islam’, ‘he was a pious and dutiful Muslim’, ‘he would be remembered for his simplicity’, ‘his humility was legendary’ were some of the numerous grieving statements that enveloped the air yesterday as family, friends and leaders of notable Islamic groups gathered to witness the burial of Alhaji (Dr) Sakariyau Olayiwola Babalola, the Deputy President-General (South) of the Nigerian Supreme Council  for Islamic Affairs (NSCIA).

The remains of Alhaji Babalola was buried in accordance to Islamic rites at Ikoyi Cementary, Lagos, after Janazah (prayer for the dead) was held for him at the Lagos State Central Mosque.

Babalola, who also doubled as the President-General of the Muslim Ummah of South West Nigeria (MUSWEN) answered the call of Allah at the early hours of Wednesday at his Lagos home, aged 87.

In its condolence message, the Nigerian Supreme Council for Islamic Affairs (NSCIA) commiserated with the Muslim Ummah and Nigerians, over the demise of Alhaji S. O. Babalola, who was equally the Osupa Adinni of Lagos State.

According to the body in its condolence message signed by the Apex Muslim body’s Deputy Secretary General, Prof. Salisu Shehu, “It is with utter shock and total submission to the will of Allah that the Nigerian Supreme Council for Islamic Affairs (NSCIA) announces the transition of its Deputy President General (South), Alh. (Dr) S. O. Babalola (OON). 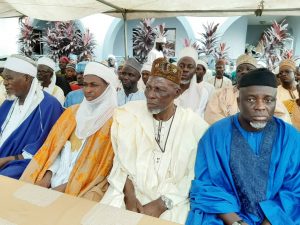 “The Council commiserates with His Eminence, the President General of NSCIA and Sultan of Sokoto, the National Officers of NSCIA, the Executive Council and the entire MUSWEN family, the family of the late leader and the generality of Nigerian Muslim Ummah on the demise of Alh. Babalola. The Council prays that Almighty Allah admits its late leader to Aljanna Firdaos.

According to the Amir of The Muslim Congress (TMC), Dr Lukman AbdurRaheem, the body commiserated with the Nigerian Muslim Ummah over the demise of the President-General of MUSWEN.

Dr AbdurRaheem described the late Alhaji Babalola as a humble and dutiful philanthropist, saying, “Alhaji S.O. Babalola was a philanthropist who gave all for humanity. He was a humble, pious and dutiful Muslim, ready to accept responsibility in the course of Islam. He used his wealth, honour and position to positively impact on the less privileged.

According to him, “He built several mosques and supported several Islamic organisations financially. He empowered numerous individuals irrespective of their ideological inclinations. We will surely miss this iconic figure. His space would be difficult to fill,” he buttressed. 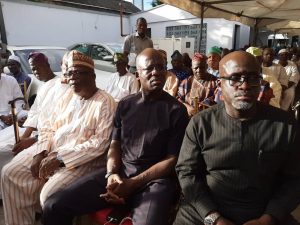 In a condolence message, UMA President and Chief of Staff to the Governor of Ogun State, the Alhaji Shuaib Afolabi Salis, described the late Babalola as a colossus of the Muslim community whose commitment and generosity will be sorely missed.

Alhaji Salis said, “Chief S.O. Babalola was a pillar of Islam in Nigeria. He was a selfless man who contributed immensely to the spiritual, educational and economic empowerment of Muslims across the country.

“He was one of the founding fathers of MUSWEN and played an exemplary role as President until his demise. We pray to Almighty Allah to forgive his shortcomings and reward his good deeds with the best of Paradise.”

“We also express our condolences to Chief Babalola’s family in particular and the entire Nigerian Muslim community. May his soul rest in perfect peace, amen.”

NASFAT President, Engr. Kamil Bolarinwa, described the late business mogul as a great pillar  of support for Islam, stating that the late S. O. Babalola was very passionate about Islam and was always willing to rise to any demand relating to the deen and the Ummah.

“Owing to his exemplary leadership qualities, as the pioneer President of the Muslim Ummah of the Southwest Nigeria (MUSWEN), Islam grew tremendously and rapidly in the Southwest. His tenure promoted unity, harmony and development among the Islamic Stakeholders in the country.”

Speaking further, “Engr. Bolarinwa added that Late Alhaji SOB will be fondly remembered for his outstanding philanthropy, which  benefitted  Muslims and non-Muslims as well as Islamic Organisations across the country.

The Director, Media and Strategic Communications Muslim Public Affairs Centre (MPAC) Nigeria, Alhaji Abdulwarees Solanke, added that the Muslim world has lost another illustrious son who dedicated his entire life to the service of Allah, beyond the shores of Nigeria.

Alhaji Solanke noted that Dr. Babalola lived an extremely Spartan life despite the immense blessings of Allah on him.

“His humility was legendary, and his unparalleled leadership qualities manifest in his pioneering efforts at the formation of MUSWEN, the coordinating body for Muslims in Southern Nigeria, not just the South West,” he added.

According to him, That Muslim organisations in Southern Nigeria are cohesive, speaking with one voice and present a common front on issues of national concerns are due largely to the maturity and magnanimity of late Dr. Babalola.

“Though at the Muslim Public Affairs Centre, MPAC Nigeria, we are sorely pained at the death of this father figure of Muslims, we are consoled that he lived a life of worthy legacy.

“Death is a certainty, because every soul shall taste death. The beauty of death particularly for the Muslim whose covenant of devotion and service to Allah remained sacrosanct till his last breath, is that Allah has promised  such Al  jannat,” he added.