Hajia Balogun during her powerpoint presentation

The lead consultant at Habiba Balogun Consulting (HBC), Hajia Habibah Balogun has told a group of Muslims who graduated with First Class degree that Emotional Intelligence will make them succeed at work not their grades.

Speaking at the maiden edition of the First Class Muslim Graduates’ Summit held at the weekend in Lagos, Hajia Balogun said, many students graduate with First Class degree because of their IQ (Intelligence Quotient), but their class of degree is not what is going to make them succeed in the labour market.

“What would help them succeed is people skills which comes under the umbrella of Emotional Intelligence,” she added.

According to the social entrepreneur, Emotional Intelligence is the ability to know yourself very well; ability to control your emotions; ability to have good relationship with other people; show empathy and be self motivated.

In a chat with Muslim News, she said, “I just wanted to educate them and show them the dilemmas they would face at their places of work and how they have to be aware of the differences between them and other people; different meanings people attach to what they say and how they look and different contexts they are going to find themselves — secular and Islamic, and how they must make decisions and comport themselves in such a way that their faith can enhance their work.”

“Not being detrimental to their work and not just looking at the work they do, working with the people they are surrounded with is what would make them successful in life,” she added.

Buttressing her views, Hajia Balogun said during her presentation titled, ‘Emotional Intelligence’, that research has shown that people who are very good academically such as First Class graduates don’t end up running their own companies but end up as the employees of people who didn’t do so well in school that got third class or were backbenchers in class.”

“What’s the difference?,” She asked the group of participants of 45 Male, 34 females, who defied the rains on Sunday to attend the summit, an initiative of the First Class Muslim Foundation.

The graduate of French and Italian Languages from the University of London, England said, “The people who didn’t do well academically have high people skills, high relationship management skills, high negotiation skills, high selling skills. These are the skills that make people successful in life outside the classroom.”

“Yes, the First Class graduates have the brains to do the work, but they need to acquire those people skills and improve their emotional intelligence so that they can also be successful outside the classroom.

While highlighting the practical approach towards enhancing their productivity at work, Hajia Balogun, who also bagged a Masters Degree in Organisation Management from George Washington University, United States, urged the participants to put as much emphasis in their relationships with their colleagues as onto their work.

She said, “You can’t just face your work alone. You have to make sure you put as much emphasis into your relationships with your colleagues, suppliers, stakeholders and customers. It’s very important and how do you do that? First thing is to become more aware of yourself and how other people view you and how you come across.

“And then, work on yourself to control any reactions that are negative or judgemental or things that might piss people off. Be more in control of yourself. 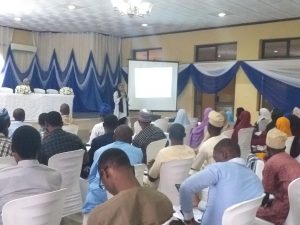 “You need people to help form your business, you start networking. Just start awareness of yourself and where you want to go in life. It will help you change your behaviour and strategies and be more successful.

“You start by making sure you build and cultivate your network. Just start with an awareness of yourself and where you want to go in life. It would help you change your behaviours and strategies and be more successful,” she added.