Osinbajo warns religious organisations on use of social media

The Vice President, Professor Yemi Osinbajo has advised faith leaders to be careful with the use of social media to avoid promoting conflicts that could go out of hands.

He gave the advice during interfaith religious dialogue on promoting religious tolerance and acceptance organised by the United Arab Emirate Embassy in Abuja.

Noting that government regulation on social media was not necessarily the way to go, he said that persons of faith and leaders that use social media actively owe a responsibility to the society and to everyone else to ensure that it is not allowed to become an instrument of conflict and war.

He said:”I want to say in particular about social media that we absolutely need to be careful with our use of social media.

“If we do not want to promote the kind of conflicts that can completely go out of hands, we must be sure that we are policing ourselves and regulating ourselves on social media. 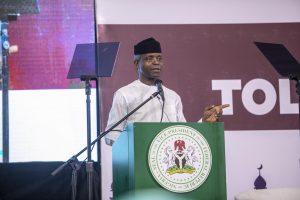 “I don’t think that government regulation is necessarily the way to go, but I believe that we as persons of faith, as leaders and those of us who use social media actively, owe a responsibility to our society and to everyone else to ensure that we don’t allow it to become an instrument of conflict and war.

“Recently, I was sharing at a gathering about my aunty, an 81-year-old lady who thought I had resigned.

“It was Rev. Sister Agatha who mentioned (in one of the panel discussions today) that if we are not careful, most people are not discerning enough to tell fact from fiction.

‘Depending on what it is that you are spreading, if you choose to spread the sort of news that can create real conflict and religious misinformation which is the worst sort, it can create the kind of conflict that can completely get out of hand and jeopardize all of our lives, livelihood and property. 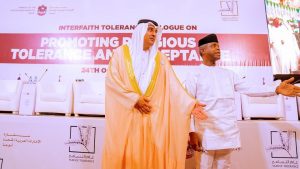 “It is important that we keep self-regulating and ensuring that we don’t lend our platforms to those who would promote conflict.”

He commended Ambassador Fahad Obaid Mohammed Altaffag, describing him as a true believer in peace and tolerance for hosting the dialogue.

“A few weeks ago in Lagos, he hosted the UAE – Nigeria Cultural Day, where we celebrated the brotherhood of our countries through the Arts.
“In you and the good people of the United Arab Emirates, we are delighted to say that we have true partners for peace, ” he said.

Osibajo said that a great deal of inter-religious dialogue tends to focus on mediating the differences between the various religions, creeds and various positions, adding that it was absolutely necessary.

He said,” However, I do feel sometimes that we do not speak enough about these common threads and things that bind us; that all human beings regardless of faith or ethnicity, desire much the same things, to be valued, loved, treated with dignity and fairness, to possess at least the basics of life – food, shelter and clothing sufficient for self and family.

“As we have heard, the Golden Rule is “love thy neighbour as thyself” or “do unto others as you would have them do to you.” This rule occurs in every major religion and even in some iterations of secular constitutions. This is a common thought.

“It is significant that there is a truth which all adherents of different faiths and even those who say they do not believe in God can confidently claim belong specifically to their creed or to their own way of thinking, or collectively as people of faith, or as those who even have no faith. 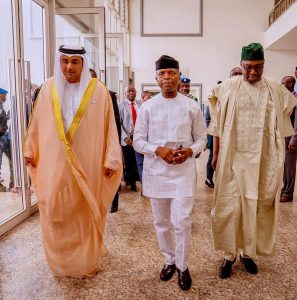 “Treating people the way we would like to be treated imposes a moral obligation on us to put ourselves in the other person’s shoes before we act. This is the very definition of empathy.

”For those of us who are Christians, an understanding of the gospel of Jesus Christ for example, reveals that Christianity is not in fact, a religion. It is the establishment of a relationship of love, forgiveness and reconciliation between God and man.

“Central to that message is that we are required to love God and then love our neighbours as ourselves, but the gospel goes on to say that it is a liar who says he loves God but hates his neighbour. So, the whole essence of the love of God itself is demonstrated in the love of one’s neighbour.

“Love is a sacrificial act, it requires self-sacrifice, which is why what Imam Abubakar Abdullahi did is deeply exemplary. When “a band of herdsmen” as they were described, came into his village to kill Christians, he put them in his home and in the mosque.

“When the ‘herdsmen’ insisted on killing the Christians, he said they had to kill him first if they wanted to kill the Christians. He put his life on the line for what he believed.

“Our religious leaders must accept that this is the true demonstration of leadership. We must go beyond rhetoric, beyond talking about tolerance, we must make the sacrifices required. This is the real challenge of leadership, leading rather than following. 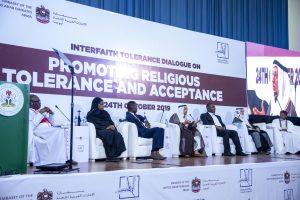 “That is what we need great leadership for and what we need our religious leaders to do. The easiest thing to do in the world is to bring suspicion.

“There is already enough suspicion, the fact that you belong to different beliefs, already creates the basis for suspicion. If we make it easy for those fault lines to be perpetrated, then we can’t describe ourselves as true leaders.

“Recently, I had the privilege of addressing young Muslims and Christians in an event quite similar to this event.

“I submitted to them that the great conflict of our time is not a clash of civilisations, between Islam and Christianity but between extremism and human solidarity; between the forces of hate and intolerance and those of empathy and peace.

” As practitioners of empathy, it is our responsibility to build bridges and to seek common ground as a basis for national progress.

”In every diverse society, a measure of conflict and discord is inevitable. This is the natural social consequence of our differences brushing up against each other. Whether these tensions become teachable moments for learning more about ourselves or they snowball into implacable hostilities, depends on how we address these tensions.

“As gatekeepers of the public mind, the media, and now especially social media, play a very crucial role in shaping our perception of these differences. 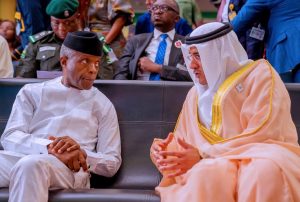 ”Do we report tragedies and incidents of conflict in ways that promote the sanctity of human life? Or are we simply driven by the need to drive lucrative sales and clicks by promoting shock value, sensations, gratuitous violence and the cynical coverage of carnage?

”We must resist the urge to portray communities in caricatures. I think it is important to stress that when an individual commits a crime, he or she does so as an individual and not as a representative of an ethnic or religious community.

”Neither journalistic best practice nor legal convention subscribe to the idea of holding communities responsible for the actions of individuals.

He also said that the people in the media and opinion molders have a responsibility to inspire people to think deeply about the complexity of the society.

“You have a responsibility to help us see the bigger picture, to rise above our prejudices and to apprehend the nuances that characterize inter-group relations in a plural society such as ours,” he said.

He said that the conversations witnessed at the gathering had shown, that “we have voices of reason and empathy in our religious communities. I urge the media and social media which involves every one of us as gatekeepers of the public mind, to lend their platforms to advocates of peace and mutual understanding and therefore amplify our potential for harmonious co-existence.

“At the same time, we must ensure that we intentionally marginalize the agents of intolerance and hatred and deny them the ability to influence impressionable hearts and minds.

“As religious leaders, media personalities and people of faith in general, we share a common calling to apprehend the truth. One truth that our diverse moral traditions agree on is the Golden Rule. It is, in many respects, the primary ethic and as we commit to practically living it out, we will bring in a kinder, safer and more peaceful world into being,” he stated