It was early October in Riyadh, Saudi Arabia. The Indian superstar Shah Rukh Khan (known as SRK) stood before hundreds of guests and began with the most basic of Islamic injunctions: the remembrance of God.

“In the name of God, the most gracious, the most merciful,” SRK narrated in Arabic much to the delight of those in attendance.

“We have been talking about the hospitality, the warmth, the goodness and the love that has been showered upon us … and for most of us, it’s our first trip to the Kingdom of Saudi,” he continued.

“Inshallah, we all wait with bated breath because cinema has opened up here in the kingdom of Saudi Arabia. You have so many new stories to tell.”

The crowd roared. In the audience, fellow film stars Jackie Chan, Jean-Claude van Damme and Jason Momoa of Game of Thrones fame, smiled lavishly. Later SRK managed to steal a selfie with Chan and van Damme, which he described as a moment with his heroes. 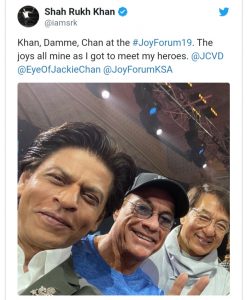 The Joy Forum is an event touted to “help develop the entertainment industry in the kingdom”. As part of the kingdom’s Vision 2030, the plan is to make Saudi Arabia an international centre for mega entertainment.

Since he became the crown prince of Saudi Arabia, Mohammed bin Salman has embarked on a relentless and expensive PR campaign to change the way the kingdom is perceived by outsiders.

And for some time it received some help from western media.

Despite the scale of domestic repression on civil and human rights, its long history of gender inequality, its horrific destruction of Yemen, its backing of the coup in Egypt in 2013, close ties with the US and Israel in the further subjugation of Palestinians, many in the western media amplified Mohammed bin Salman’s carefully crafted image as bold reformer.

The murder of journalist Jamal Khashoggi in October last year temporarily set back the sycophantic coverage; however, the PR campaign has continued. But even then, despite everything that we know about the Saudi kingdom, there are still those willing to turn a blind eye.

A selfie with Modi

Last week, SRK was in the news again, for different but equally problematic reasons.
In marking the 150th anniversary of Mahatma Gandhi’s birth on 21 October, SRK was among a number of Bollywood’s elite who met with Indian Prime Minister Narendra Modi to commemorate the occasion. A selfie of SRK alongside Modi and fellow superstar Aamir Khan made the rounds on the internet.

Here were two of India’s most powerful Muslim icons fraternising with a man who presided over a pogrom of Muslims in Gujarat in 2002, openly endorses Hindu nationalist ideology that sees minorities, including Muslims and Christians, as second-class citizens, and emboldens cow vigilantes who lynch Muslims even at the suspicion of eating beef.

“I truly believe that  Gandhiji needs to be reloaded, Gandhiji 2.0 is what we need because the world has changed a lot, it is moving very fast and you [PM Modi] have digitised all of it too, have opened payment gateways,” SRK said at the event.

Just as SRK travelled to Riyadh to endorse the Saudi kingdom’s whitewashing of its crimes, here he was endorsing the Modi government’s attempts to use Gandhi’s reputation for non-violence as a front, even as it annexes Kashmir, threatens to strip millions of Muslims of citizenship or wilfully censors the media.
It left many bewildered, confused and upset.

SRK has always fashioned himself as “different”. He is well aware of the need for Muslim characters in his films.

In the past, he has been critical of the rise of intolerance in the country. The story goes that SRK “refused” to meet Benjamin Netanyahu when many of Bollywood’s elite met the Israeli PM during a visit in 2017 during which many deals between Israel and Bollywood were cemented.

He is the ordinary middle class guy with barely three expressions who made it big. But, like Bollywood, he has also used and abused this Muslim identity when it has suited him.

In his Ted Talk in Vancouver in 2017, SRK spoke of India’s immense generosity when it “decided somehow that I, the Muslim son of a broke freedom fighter who accidentally ventured into the business of selling dreams, should become its king of romance, the ‘Badshah of Bollywood,’ the greatest lover the country has ever seen … with this face. Yeah.
“The people of this ancient land embraced me in their limitless love, and I’ve learned from these people that neither power nor poverty can make your life more magical or less tortuous,” he added.

A mighty fine sound byte it might seem at first, but the assertion is immensely problematic.
He framed himself as an outsider, a guest of this imagined Hindu nation, and not part of the fabric of a secular India. It is also difficult to dismiss the immense egotism carried in the sentiment; hundreds of millions of Muslims live in abject poverty in India, marginalised and ghettoised by successive governments.

That he has thrived in India and been embraced, by virtue of being the very embodiment of a Bollywood Muslim who is non-threatening to the body politic and whose Muslimness is limited to cultural mannerisms, is clearly lost on him.

Consider too, his comments when Hollywood star Meryl Streep raised the spectre of a Donald Trump presidency at the Golden Globes Awards in 2017. At the time, Indian film stars were chastised for being impotent muppets in contrast to their Hollywood counterparts.

SRK wrote a piece in the Indian Express in which he argued that he had “found it very odd that all the journalists started saying ‘when will Indian actors start speaking [out] like this?’ Why would Indian actors speak about a situation that does not exist? If there is an agenda and situation you want us to speak on, then you ask us about it and, obviously, we do speak.”

But the silence has been deafening.

Is it possible that despite his immense wealth and influence, SRK may have been coerced into serenading Modi? After all, India is fast becoming terrifying for dissidents.

It still does not explain why he would choose to advance Saudi Arabia’s art-washing agenda. Saudi Arabia’s grip on two of Islam’s most revered sites are for most Muslims their only connection with a kingdom they would rather not lend legitimacy to.

READ ALSO...  Eid al-Adha: A manifestation of unity and peaceful nature of Islam, By Abdulganiyu Abdulrahman

Unlike SRK, Muslims in India don’t get to oscillate between Raj of Dilwale Dulhania Le Jayenge and Rahul of Kuch Kuch Hota Hai or Veer of Veer-Zaara when it suits them, and then as “a moderate Muslim” for Saudi Arabia or a token for Modi when the occasion requires.

SRK might need to take a selfie to keep up the facade as the undisputed “King of Bollywood,” but it fundamentally rubbishes the fears of ordinary Muslims who feel threatened on a daily basis. 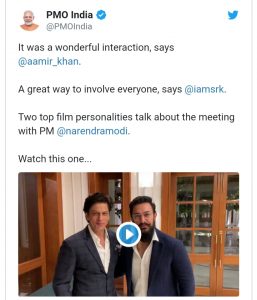 Furthermore, his willingness to allow both Mohammed bin Salman and Modi to use his global stature for their nefarious ends only exemplifies the extent to which he has become a slave to his own success.

It also underscores the need to recognise Bollywood as a bottomless pit of state propaganda and not a product of cultural or creative significance.

This is an industry willing to sell its soul, and Shah Rukh Khan is its flag bearer.

The views expressed in this article belong to the author and do not necessarily reflect the editorial policy of Muslim News Nigeria.

Azad Essa is a senior reporter for Middle East Eye based in New York City. He worked for Al Jazeera English between 2010-2018 covering southern and central Africa for the network. He is the author of The Moslems are Coming (Harper Collins India) and Zuma’s Bastard (Two Dogs Books).