Before the glorious birth of Muhammad (SAW), the son of Abdullah in Makkah on Monday, 12th Rabiul Awwal, the third month of the Islamic calendar in the Year of the Elephant, corresponding to August, 570/1 C.E, the Arabian Peninsula (and by extension, the whole world) was in Jahiliyyah (the state of ignorance of Divine Guidance).

As at the time Muhammad (peace be upon him) was born, idol worshipping was at its zenith. The Ka’bah (Allah’s sanctuary on earth) in Makkah housed about 360 different idols, and people from far and near used to gather to worship different idols, even as these idols could neither harm nor save them.

The People of the Book (the Jews and Christians) had already abandoned the monotheistic faith in God brought by Prophet Eesa (Jesus Christ), who was sent to the Bani Israeel (the Children of Israel) about 500-600 years before the birth of Muhammad. Instead, they “took their rabbis and their monks to be their lords besides Allah.” Qur’an 9: 31.

Besides, while the Jews abandoned the Torah for the Talmud, the Christians merely jettisoned the Old Testament which contained God’s laws. Instead, they believed in the doctrines of Grace, Trinity and Original Sin as propounded by Apostle Paul and others.

During the pre-Islamic period, the social, political and cultural lives of the Arabs were on the brim of total collapse. There was a perniciously high level of corruption, injustice, intolerance, persecutions and moral degradation, worse or similar to what the world is witnessing today.

The wickedness of Homo sapiens and man’s inhumanity to man indeed reached its climax then. Human beings became sacrificial items for the gods, and parents, particularly the fathers killed their children (especially female) for the fear of poverty. 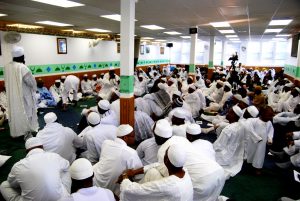 Allah could have destroyed the entire universe with His “Kunfayakoon” (meaning, “Be, and it is”) as contained in Qur’an 2: 117, but the Most Merciful and Kind God did not put an end to the world then. He (SWT) rather sent His beloved servant, Muhammad (SAW), the son of Aminah, as a mercy and blessing not only to the Arabs but to the entire universe (Qur’an 21: 107).

Prophet Muhammad (peace be upon him) returned mankind to the worship of One God, the Lord of Eesa (Jesus), Musa (Moses) and Abraham (Ibrahim). Muhammad (SAW) was miraculously able to achieve this within the 23 years of Prophethood – between the age of 40, when he received the first revelation, and the age of 63, when he left this world.

Despite persecutions faced while calling to the Path of Salvation, he succeeded in establishing Salat (five daily prayers), the Zakat institution (to cater for the poor and the needy) and Sawm (fasting in the month of Ramadan). He purged the House of Allah (the Ka’bah) from all forms of idolatry, so that believers across the world can perform the Hajj. These are the five pillars of Islam, the first being Iman (belief).

Prophet Muhammad (peace be upon him) was sent with the best of characters and as a model to the world. He was a most generous and trustworthy man. Little wonder he was nicknamed Al-Amin (The Trustworthy) by his people, including his enemies, years before he was called to Prophethood. He brought about justice, tolerance, decency, good conduct and how to live in peace with people of different religions. He was a caring husband, a loving father and a just leader.

“Indeed in the Messenger of Allah (Muhammad, SAW) you have a good example to follow, for him who hopes in (the Meeting with) Allah and the Last Day, and remembers Allah much.” Qur’an 33:21

George Bernard Shaw, a famous Western writer, affirmed in his book; The Genuine Islam, first published in 1936, that: “I have studied him – the man (Muhammad), and in my opinion, he is far from being an anti–Christ. He must be called the Saviour of Humanity. I have prophesied about the faith of Muhammad that it would be acceptable by the Europe of tomorrow as it is beginning to be acceptable to the Europe of today.”

The unmatched exemplary qualities of Muhammad (peace be upon him), who topped Michael H. Hart’s “The 100: A Ranking of the Most Influential Persons in History” may have inspired a Muslim King of Irbil in Damascus, in 604 Hijrah to declare a national public holiday and celebrate, for the first time, Mawlid Nabiyy (the birthday of Prophet Muhammad (SAW)).

According to Imam As-Suyutiyy, “Muzaffar – the man who kick-started the celebration, at one of the Mawlid celebrations he organised, spread banquet tables filled with five thousand heads of grilled sheep, ten thousand chickens, one hundred horses, one hundred thousand bowls, and thirty thousand dishes of sweets. He organised an audition show for the Sufis from noon till dawn, where he personally participated, rejoicing with the dancers.”

The celebration of Mawlid Nabiyy has continued till date among the Sufi Tariqah order in many parts of the world. From findings, 25 out of 54 African countries, including Senegal, Sudan and Nigeria; 11 out of 14 Middle East countries, including Iraq, Iran, Jordan, and Asian countries like Bangladesh, Indonesia and Pakistan, among others have officially recognised Mawlid Nabiyy as a National/Public Holiday.

READ ALSO...  Nathaniel Samuel's father finally opens up, says his son is a Christian, not Muslim

The declaration of a Mawlid Nabiyy public holiday yearly in Nigeria by the Federal Government is seen as a measure taken in the interest of unity, peace and love among members of different religious groups, particularly as Christians also do enjoy such privilege during the birth of Jesus Christ believed to be on December 25. However, some Muslims among the ranks of the Ahlus-Sunnah wal Jamaah see Mawlid Nabiyy as a Bid’iah (innovation), citing the Prophet’s (SAW) saying, “…Beware of newly invented things, every innovation is misguidance…”

The Prophet (SAW) was also quoted to have said: “Whoever imitates a people is of them”, and from all indications, the mode of celebration in this part of the world (Nigeria) is similar to the non-Muslims’ celebrations.

“And thus we have made you a just community, that you be witnesses over the people, and the Messenger be a witness over you.” Qur’an 2: 143

This is the reason why another group of scholars from the Ahlus-Sunnah wal Jamaah said, though there exists no textual evidence that the Prophet (peace be upon him) or his noble Companions celebrated his birthday, there is nothing wrong if the period (declared as public holiday by several countries) is used as an avenue to commemorate and teach Muslims (youths and adults alike) about the exemplary life of Prophet Muhammad (SAW).

In recent times, the personality of Prophet Muhammad (SAW) has come under severe attacks in the Western media and their accomplice movie industries. He has been called unprinted names. He was described in a slovenly manner, forgetting that without his emergence, there will be no peace on earth and tranquillity would have eluded the world. Hence, there is a compelling need to tell the world, through education and enlightenment, what this greatest revolutionary leader, described by Allah Himself as a mercy to mankind, stands for.

Many notable scholars are also of the opinion that honouring such novel creations is not qualified to be tagged Bidia’h since it is not an Eid (festival or celebration) like Eid-el-Fitr and Eid-el-Adha. They posit that, rather than classify it as a religious observance, marking of the birthday of the greatest man should rather be seen as a social tool to reach out to the world about his legacies.

However, in doing this during the Mawlid Nabiyy (not Eid-el-Mawlid), the following conditions must be put into consideration:

Mawlid Nabiyy must be free from time wasting, neglect of Solat (prayers) and wasteful spending. It should be devoid of free mixing between the two sexes. The praises of the Prophet (SAW) should not contain flattery and excesses. The celebration should be on a single day as is practiced globally, and should include talks about the life and times of the Prophet with a view to showcasing the exemplary character of Muhammad (SAW) to the world.

The noblest act in the life of a Muslim is to follow the footsteps of the Prophet (SAW) in everything and to the best of his ability. “Say, (O Muhammad), if you love Allah, then follow me, [so] Allah will love you and forgive you your sins. And Allah is Forgiving and Merciful.” Qur’an 3:31

The love and remembrance of the Prophet (SAW) is a continuous exercise and every Muslim must continually send salutations to the Prophet (SAW) and his household regularly, within and outside our supplications as well as before and after the compulsory and voluntary Solat.