No fewer than 108 indigents of Lagos state have received cash and materials worth 4 million naira from Jaiz Charity and Development Foundation as Zakat proceeds.

The beneficiaries including students, traders and people with health challenges were drawn from across the three senatorial districts of Lagos state.

Speaking during the distribution ceremony held on Tuesday at Beleke Smith Memorial Mosque, Surulere, Lagos, the Executive Director of the Foundation, Dr Abdullahi Shuaib disclosed that the highest percentage of disbursements would be going into educational support. 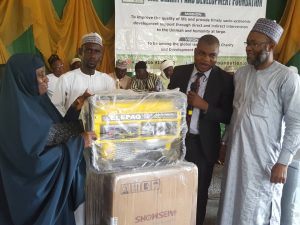 This, he said was to promote human capital development as well as to attain and sustain personal finance and economic development.

According to him, 54 percent of the beneficiaries fall under the education support category, and 32 percent fall under economic empowerment, while the rest will take care of health challenges.

Explaining why education support has the highest allocation, Dr Shuaib said education is the best legacy one can bequeath the younger generation especially children from humble backgrounds who are struggling to make ends meet. 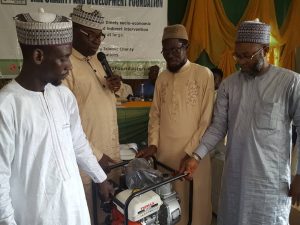 “We discovered from our empirical studies over the years, that when we give people money for health challenges, more than 50 percent of them usually divert the money to sustenance, believing that God will take care of their challenges.

“This happens because, the foundation has little control over monitoring the expenditure of the money but at the point of doing the mid assessment, we do realize that the money given out to take care of their health was diverted to other things.

“Likewise, on economic empowerment, the foundation has placed more emphasis on buying equipment for beneficiaries and equally tried to reduce the number of beneficiaries that usually access liquid cash. We believe the equipment will generate income. 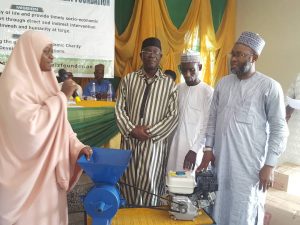 He advised the students to focus on their academic pursuits to open greater opportunities.

“Allah has solved one of your challenges by providing this unique opportunity for you. So dedicate your time to study very hard and ensure that you come out with good grades”.

Grand Mufti of Conference of Islamic Organisations (CIO) Sheikh Dhikrullah Shafi’i said empowerment has been in existence from the time of Holy Prophet Muhammad  (SAW) and Zakat is the essential component of Islamic Economic System, which eradicates poverty completely through proper implementation.

He noted that, the success of the Zakat institution couldn’t be denied due to increase in sustainability every year, adding that, “a lot of success has been recorded, particularly in increase in amount of the zakat collection throughout the country.” 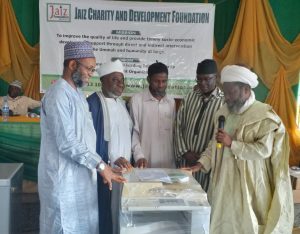 He said government participation in Zakat collection will be of huge impact and will lead to the attainment  of prosperity in the country.

“The reason some Muslims are still enmeshed in poverty despite high proceeds of Zakat is due to non involvement of the government in the system. The government needs to support the system before it can be effective”

He urged Muslim scholars in the country to give proper enlightenment to Zakat payers and beneficiaries, saying that most people paying Zakat were only paying sadaqat due to the fact that they are not aware of the actual amount they are supposed to pay. Similarly,  Zakat beneficiaries don’t know about the usage of Zakat proceeds.

READ ALSO...  CHARITY: Jaiz Foundation put smiles on the faces of the needy, vulnerable in Kogi

The Chief Imam Adangba Central Mosque, Sheikh Abdurahman Sulaiman Adangba said despite the success in increasing the collection of zakat from year to year,  many  Muslims are still living in abject poverty.

“So many Muslim are impoverished because they lack the education of the usage of Zakat. We must let people know that Zakat is not  free money, although it is given to them to use. They are to work with it and reinvest it in the system so that others can benefit as they have benefited.’ 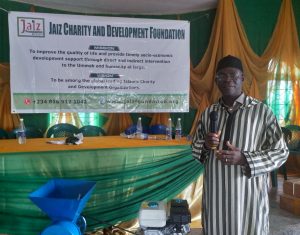 He advised that a template should be put in place to avoid proliferation of Zakat proceeds.

“This globally accepted template, will serve as a medium to disburse, collect zakat. If we start using the template, it will resist the situation whereby people collect Zakat from different Zakat organisation,” he added.