Barrister Zaynab with her parents

The aura of tranquility, accomplishment and joy was caught in the home of Alhaji AbdurRazaq AbduSalam Awayewaserere, famously known as Abu Umar Al-Faruq, as his Daughter, Zaynab was called to Bar, today, Thursday, in Abuja.

Zaynab, who studied Law at the University of Lagos, was among the thousands of new wigs that received their certificates to practice, at a ceremony held at the Nigerian Law School Campus, Bwari, Abuja.

There was a buzz of excitement in the air as the creme de la creme in the Awayewaserere family of Ilota compound, Aran-Orin, Kwara state including Alhaji and Alhaja Abdulkareem AbdusSalaam, Alhaji Jamiu Abolarin and Hajia Seliat Abdulsalam Olohungbebe, set aside other commitments to honour their scion.

Abu Umar Al-Faruq gives thanks to Allah for His mercies.

The seasoned author and journalist who is  the Director of Programmes at Voice of Nigeria (VON) said in an exclusive interview with Muslim News that, it is an occasion to further thank Allah for His mercies and each time a child of his bags a degree, he asks himself, how he can appreciate Allah’s mercies.

According to him, “I recall my wondering days when there was no wife. Now children are  maturing and graduating. Therefore, I thank Allah and I am happy that We have again recorded an earthly success in training her.  We look forward to other achievements ahead”.

Describing his daughter, Abu Umar said, “Zainab is a brilliant girl. She has demonstrated this from primary school and has never disappointed me.  When she was seeking admission, she was admitted into both University of Lagos and University of Ilorin which was a rare feat then. It was because of her good result.

“She has special flair for making me happy.  When at home, she took special care of my choice meals, and she does that well. Just like her siblings, I love her and in shaa Allah,  she will soar to heights unhindered.

On his vision for Barrister Zaynab, Abu Umar said, “I want her to soar to heights unhindered. To fly her flag across the world, making positive impact on humanity and bringing about desired progress for herself and humanity. I want her to rise and defend the deprived, the challenged and the underprivileged thus, entrenching the Awayewaserere cord in her.”

The joy and excitement was also visible when  Muslim News interacted with Barrister Zaynab. She said, “I always wanted to do something about international treaties,  trade and migration. I thought I was going to study international relations and diplomacy until the day I was to fill my UTME form.

“I was about to fill the form then my dad’s friend who was a lawyer insisted that I chose law. I told him what I wanted to fill and he made me understand I could even do it better as a lawyer.” 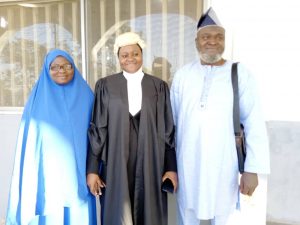 She expressed her joy for making that decision and making it this far. Even though she claimed that it was not easy for her, she still pushed herself this far.

“Several times I’ve had trouble sleeping and I’d just start tahajjud (midnight supererogatory prayers), pray to Allah, a lot of times, I’ll cry and be like Allah, it’s all in your hands,” she said.

Her greatest motivation is the belief she has in Allah and the intention to do good with the degree and help Islam with her career.

Proceeding on her career, she confirmed to Muslim News that she wanted to further in Migration Laws and Refugee Protection. 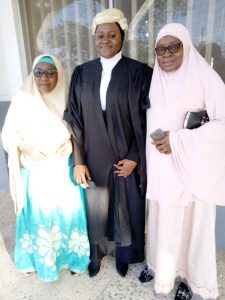 “It is basically how Migration Laws of different regions affect refugees as against the United Nations provisions for Refugees and a lot of lawyers are needed in that area due to the large number  of refugees and IDPs produced every year.”

Recalling the sacrifice of Barrister Firdaus Amasa, she claimed that her major happiness is that she could wear her hijab for the call.

She advised aspiring Muslimahs to not let their being Muslimahs limit them. It should rather give them a clearer view of where to thread  and be ready to always stand for the truth.

According to one of her siblings, Hamnah, who is the current the Amirah of MSSN UNILAG, “Barrister Zaynab is a very intelligent person. She is caring and hard working too. She is very good in Islamic History (Seerah). She is also inquisitive and always ready to learn. 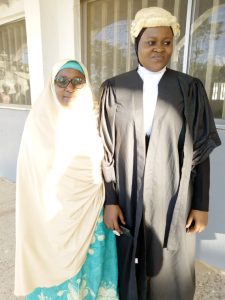 “She is very stubborn as well but she is a very good listener. As expected, she argues a lot but with facts and proofs”.

Several friends facilitated with her and congratulated her through various platforms. It is an indication that she is a “person for all”.