…On the conditions of Muslims in the East Asian country

Says, As minorities, the media respect our values

When the intention to travel to Seoul, South Korea for the GGCI Conference came up, I notified my friend and the publisher of Muslim News, Rasheed Abubakar. He was excited and immediately came up with the idea of me doing a travelogue for the most authoritative Islamic newspaper we are all passionate about, to see it grow beyond our expectations. Also, he suggested that I write about Islam and the Muslims in South Korea. I keyed into it and he made arrangement for me to go with some copies of Muslim News for endorsements but by the time he got to the airport with the copies, I had already airlifted. What I missed!

Itaewon is a district of about 22,000 residents and most popular for tourists, as such, activities around Itaewon could be compared to Ikeja in Lagos, Nigeria. 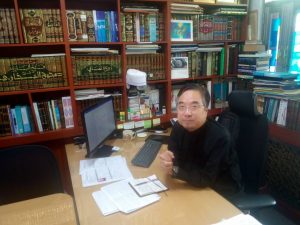 We landed safely and moved to our destination, Intercontinental COEX, Seoul in a BRT bus. I wondered at the patience of the South Koreans, as the bus driver came down at all bus stop to hand over our baggages.

Locating Seoul Central Mosque was difficult as many of the indigene had no idea where such beautiful Mosque is. This is understandable in a country of Muslim minority. Fortunately, all security posts, market shops, mall attendants have a flyer that contains the entire Seoul. Making it possible for non-korean speaking visitors to locate intended destinations. I fetch 2 of those maps and showed to a taxi driver who took me to the Mosque area. Such a beautiful location, houses the Seoul Central Mosque. It has two tall minarets, spacious car park, Waqf office, Library, Offices, prayer rooms for both gender, reception and an elementary school. Its cleanliness and organisation spurred my request to meet the Imam.

‘As Salam alaykum warahmatullah. May I see the Imam? Is he on seat?,’ I asked.

‘Yes, you are welcome,’ said the receptionist, an handsome looking brother who responded in English.

I was taken to the Imam’s office where he was already waiting to receive me. The office has a workstation with a desktop, executive chairs and tables. A library stocked with various Islamic books stood within his reach at an arm’s stretch.

MN: My name ABDUL HAKEEM ABDUL GAFAR. I write for Muslim News Nigeria. I hope you are fine and I met you in good state? 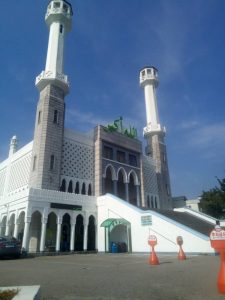 MN: I just came in yesterday and decided to pay a visit and ask about how you are doing. May I meet you?

Imam: MashaAllah, you are welcome. I am Imam Abdur Rahman Lee. The Imam of Seoul Central Mosque, Itaewon. I studied and graduated at the Islamic University of Madinah, Saudi Arabia.

MN: There appear to be a very few mosques in COEX area of Seoul, as I had to make my solat alone. It’s wonderful finding one here.

Imam: Oh, the third floor of Intercontinental COEX has a masjid. I have been there

MN: Oh, Shukran thanks. What is the condition of the Muslims in South Korea?

Imam: Alhamdulillahi, Allah has been merciful. The number of indigenous Muslims is 25,000 but with our brothers from other nations, we have a total population of 150,000 Muslims (a total of 175,000) Majority are from Bangladesh, Pakistan, Turkey, Malaysia, Egpyt, Nigeria, Sudan, Niger and others. You can see we are the minorities.

MN: Alhamdulillahi, may Allah be with you all. How have you been able to cope with da’wah activities and it finances being a minority.?

Imam: Alhamdulillahi, we do a lot of da’wah activities including lectures and public symposium. Many of these activities are financed by the Masjid itself. As you can see, we built a car park where members with vehicles pay for especially on Jum’ah. The mosque also has shops attached to it and these shops are given out for rent, and some other individual donations. Alhamdulillahi

MN: Baarakallahu fikum. How well is your relationship and cooperation with the non Muslims in promoting peace and tranquility?

Imam: Yes, as Islam encourages peaceful coexistence, we also ensure we stick to this dictate of Islam. We enjoy a cordial relationship with non-Muslims. We extend invitations to them for our symposiums, and we support initiatives that promote peaceful co-existence. Likewise, we cooperate on matters that improves the country socio-economic situations as much as Islam permits but we avoid what Islam kicks against.

MN: Let’s talk about the relationship of the Muslim Ummah with the media and the government. What is it like in South Korea?

Imam: Alhamdulillahi, we do not have issues with the government. The government is supportive of initiatives that promote the Korean culture of peacefulness, mutual respect and trust. Regarding the media, as Muslims are the minority, the Korean media has respect for our values, and in return, we hold them in high esteem. Majority of the media houses are owned by the government. Summarily we do have a good relationship with them.

MN: I pray that Allah continues to grow your initiative and bless your work. What roles do women and children play in your work and what plans are available for their development?

Imam: Women play an important role in the development of Islam, and as such are not left out of our initiatives. We have an Islamic school in the mosque premise that teaches the children, particularly those of the foreign brothers. We operate a curriculum that caters for the South Korean education system and likewise Islamic knowledge. May Allah assist us.

The interview ended with an exchange of pleasantries and a request was made for a photo session, which he gracefully granted. At this point, I remembered how I had narrowly missed coming along with a copy of the Muslim News paper editions.

*SPECIAL cities are one of the first-level/ highest ranking administrative divisions within South Korea. There are 8 first-level cities in South Korea: Busan, Daegu, Daejeon, Gwangju, Incheon, Sejong, Seoul and Ulsan.