Muslim professionals across different fields of human endeavour have been saddled with the task of living up to the tasks, responsibilities and authority delegated to them.

They were also spurred to become problem solvers by trying to do things in novel ways while raising the banner of Islam.

This surfaced at the just concluded Annual Leadership Seminar of The Professionals, an organ of Al-Mu’minaat Organisation which took place during the weekend at the M-Solution Consulting International Hall, Isolo, Lagos.

The guest speaker at the auspicious event, a Deputy Director, Office of Education Quality Assurance at the Lagos State Ministry of Education, Mr Ogunmuyiwa Sulaimon emphasised the essence of human beings as representatives of Allah with the authority to lead man to good and forbid evil for them.

Addressing the gathering comprising of various Muslim professionals including doctors, engineers, accountants, teachers, business administrators, artisans and host of others from various fields, Mr Ogunmuyiwa charged them to become problem solvers rather than problem creators.

According to the Lagos Education Ministry Deputy Director, “This feat can be achieved using de novo factor which means trying to do things in a new way. You all are representatives of Islam and it is upon you to raise the banner of Islam with due sense of responsibility.

“You need to start thinking about problems that you need to proffer solutions to. There’s need to have a vision that you will work to achieve. Mine is to establish a Marriage University where people can go and study to get different degrees due to various marriage crisis,” he buttressed.

“Again, a lot of people don’t delegate because they fear that when they delegate authority, the other people are going to erode the authority absolutely, so people work and work and work and make their subordinates to be redundant because they don’t want to delegate authorities to them for fear of them displacing or taking over in absolute terms the powers from them such that they won’t be relevant soon in the organization.”

In her welcome address, the Coordinator of The Professionals, Hajia AbdulHameed Jelilah noted that the motivation behind the theme chosen for the event was to remind and refocus everyone to the authority delegated to them by their Lord.

“The theme of today’s seminar is carefully chosen being representatives of Allah on the surface of the earth coupled with the authority He had bestowed on us to lead mankind to what is good and prevent what is bad for them, we seem to be lagging in these responsibilities” she said.

“The Professionals being the think tank for the Al-Mu’minaat Organization where we roll out ideas and give direction for the progress of the organisation, with the de novo factor, we would channel new ideas and think not just outside the box but completely without the box,” she noted. 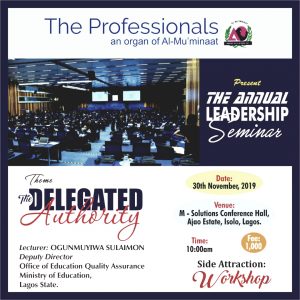