When on Thursday, December 12, 2019, Arsenal’s defender, Hector Bellerin tweeted “Fu*k Boris” ahead of the UK election between Boris Johnson and Jeremy Corbyn, the English team didn’t issue a statement against it. To one of the best English teams, it’s neither a threat nor a political statement for him to tweet such an  unguarded statement capable of influencing people’s vote. In fact, such tweet fits into hate speech in Nigeria. But since it isn’t about Islam, all is well.

24 hours later, on Friday, December 13, the club swiftly issued a statement to distance itself from the tweet of another, perhaps one of its finest players, Mesut Ozil, who only expressed himself, just like Bellerin, by criticising China over the persecution of Uighur Muslims. Condemning Ozil, Arsenal said it doesn’t involve itself in politics. Interesting! 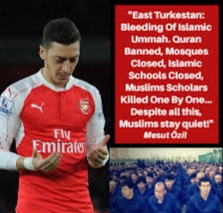 So, Ozil’s show of compassion and solidarity for fellow humans was considered political and required immediate disclaimer but Bellerin can tweet “fu*k you” against British Prime Minister, Boris Johnson, on the eve of election? It’s okay for Arsenal, the club we love and are passionate about? This is nothing but hypocrisy of the highest order.

Sadly, the same Arsenal who doesn’t involve itself in politics has a robust business interest with Israel, a country known for serial records of human rights violations against the oppressed people of Palestine. In fact, Labour leader, Jeremy Corbyn, a keen supporter of Arsenal had to demand that fans should boycott his own team (Arsenal) when it accepted a sponsorship deal from the Israeli tourist board. Did the management care? Of course not! The team is probably happy seeing the killings of innocent Palestinians kids, many of whom are passionate fans of the Gunners! 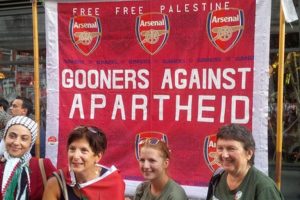 Interestingly, the love for humanity flows not only in  the blood of Ozil, but Arsenal fans, who in 2014, joined a pro-Palestine protest in West London with a banner which read ‘Gooners Against Apartheid’ and ‘Free Palestine’ as they marched in Kensington High Street, London.

Well, Dr Norman Finkelstein, American political scientist, activist, professor, and author has a message for the management of the team, “We should all do more against ethnic cleansing”.

See below Bellerin and Ozil’s tweets:

“Young people across the world have a chance to change what the future can be. Today’s the chance for all the British people to influence what your future and those living here holds. #FuckBoris #GoVote.” – Héctor Bellerín

“(In China), copies of the Quran were burned, mosques were closed down, Islamic theological schools, madrasahs were banned, religious scholars were killed one by one. Despite all this, Muslims stay quiet.” – Mesut Ozil