Parents and guardians have been enjoined to prioritise education of their children over investments in properties, clothing, cosmetics and other material things.

The Principal Assistant Registrar, Fountain University, Osogbo, Abdul Quadri Odelade, gave this advice over the weekend during the Career Mentorship Programme and Award of Scholarship held in Osogbo, Southwest Nigeria.

Delivering a lecture, Mr Odelade noted that many parents place premium on social life above the education of their children, describing such expenditure as frivolous and a waste that cannot bring happiness to such parents in the future.

He charged parents on the need to take good care of their children, so the children will in-turn take care of them when they grow old and are no longer strong enough to fend for themselves.

He described education as the best legacy a parent could bequeath to a child, saying once that is done, parents would not only have the opportunity of relaxing in their old age but will also benefit from what they invested in them when they were young.

The speaker who condemned the menace of examination malpractice in secondary schools and tertiary institutions said both the teachers and the parents are complicit in the unwholesome act that has ravaged the standard of education in Nigeria. 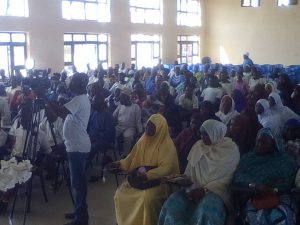 Odelade said all hands must be on deck to ensure that the system is sanitized, urging the government on the need to introduce technology into the educational system which he said would help in curbing examination malpractice to be barest minimum.

“When we speak of examination malpractice, I can say it emphatically that everybody is involved – the students, the parents, the teachers and the government are all involved in one way or the other. For instance, parents want the best for their children but aren’t ready to give the best to the same children in terms of quality time, sacrifice and moral upbringing. They therefore go to any length to make sure their children get whatever they want. This is wrong. They should always remember that whatever they get through the back door will not endure.

“Secondly, many teachers and lecturers are morally corrupt. Some engage in immorality because of economic reasons. They extort students to award mark, this is very wrong “.

Odelade advised the students to be studious and be good ambassadors of the country. He condemned a situation whereby female students do seduce their teachers/lecturers with indecent dressing in a bid to get cheap marks, urging them to desist from such acts.

The State Coordinator of the Standard Bearers, Dr Kamil Tijani of the Osun State University said the award of scholarship which started three years ago, is designed to help the less privileged in the society, especially the indigent who could not complete their education. 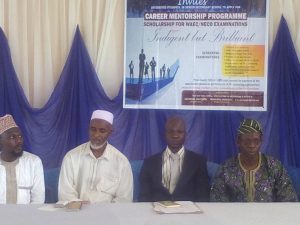 Tijani said: “These are ways of helping the government, helping the society to bring about development in our society, especially in the area of education. The idea emanated from the fact that we noted that most of these students don’t have enough resources, especially the brilliant but indigent ones.

“We deemed it necessary therefore to contribute our quota, no matter how little, so the indigent ones could also have sound education. We believe this will prevent them from constituting nuisance in the society”.

Dr Tijani urged the government on the need to collaborate with willing and relevant non-governmental organisations like the SBIO in their bid to help the indigent students in the pursuit of their education.

Eight students including Master Akintade Abdullah from Osogbo Government High School, Osogbo and Oladosu Shukrah of Agbanran School of Science, Ede, emerged the best students and were given N20,000 each for the payment of their Senior Secondary School Certificate Examination (SSCE) fee.

Speaking on behalf of other awardees, the duo of Abdullah and Shukrah appreciated the organisers for the award. They also thanked their parents for giving them a solid foundation upon which to build the future. They promised to be worthy students of their Schools, children their parents would be proud of and good ambassadors of their schools wherever they find themselves.

They also urged their junior colleagues to dedicate themselves to their studies and avoid distractions by the social media. 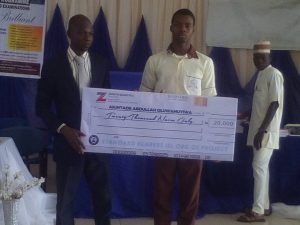 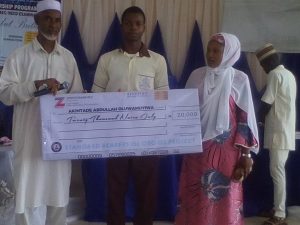 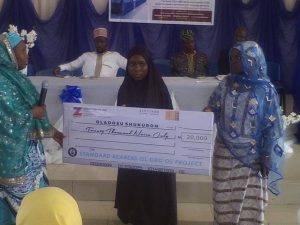 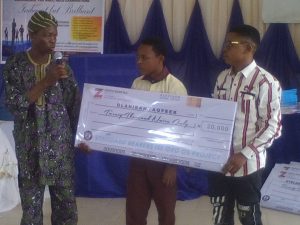