The month of December of every year is a festive period and it usually features a number of holidays. From Christmas, an annual festival said to commemorate the birth of Jesus Christ to January 1, which heralds the beginning of the Gregorian New Year, the December/early January period hosts a lot of merriment all over the world.

Despite the global acceptance of the holidays, including the Boxing Day (December 26), some sections of the Christian faith (Jehovah Witness, Deeper Life, etc) and a wide range of Muslims do not participate in the glitz and glamour that come with the festivals.

Muslims News can authoritatviely confirm that Jesus Christ, who is also called Essa by the Muslims, was not born in December as erroneously believed by the majority of Christians.

The dates (December 25 and January 1), we reliably gathered, were originally dedicated to the worship of pagan gods by the ancient Romans, where the elebrations originated before the modern commercialisation of the festivals.

According to the Shari’iah, Muslims are forbidden from imitating the unbelievers and participating in their pagan-origin festivals.

A veteran Muslim journalist, Mallam Tajudeen AbdusSalam, in a chat with Muslim News, said whoever among the Muslims imitates the Christians by celebrating their pagan-origin festivals is part of them.

AbdusSalam however stated that there is nothing wrong if Islamic organisations organise camping programmes during the Christmas and New Year periods to protect Muslim youths from the fitnah (tribulations) of participating in such festivals.

A veteran Muslim journalist, Mallam Tajudeen AbdusSalaam, in a chat with Muslim News, said whoever among the Muslims imitates the Christians by celebrating their festivals is part of them.

AbdusSalaam however stated that there is nothing wrong if Islamic organisations organise camping programmes during the Christmas and New Year periods to seize the opportunity of the long holiday to enlighten and educate the Muslim youths on one hand and on the other hand, to protect them from from vices and immoralities that have pervaded our society, through seclusion.

“After all, Qur’an related to us the seclusion of the People of the Cave and we are also aware of the seclusion of Prophet Muhammad. That seclusion gave birth to the revelation – the ultimate information and knowledge.

“Idle mind is devil’s workshop. Once the youths remain idle at this time, they naturally find alternative in debilitating movies, games, promiscuity and all forms of permissiveness.

Camping has both textual and historical evidences in Islam

A Nigerian-born Middle-East scholar, Ibn Taofeeq AbdulAzeez said camping, public lectures, seminars, conventions and other beneficial programmes during such festivities have both textual and historical evidences in the Shari’iah.

According to him, such camping was practised by the Ashabul Kahf (the People of the Cave), who secluded (camped) themselves away from a polytheistic society.

Allah narrated in Qur’an 18: 10/16: (Remember) when the youths fled for refuge (from their disbelieving folks) to the Cave, they said: “Our Lord! Bestow on us mercy from Yourself, and facilitate for us our affair in the right way!

“(The youths said to one another): And when you withdraw from them, and that which they worship, except Allah, then seek refuge in the Cave, your Lord will open a way for you from His Mercy and will make easy for you your affair (i.e. will give you what you will need of provision, dwelling, etc.)” 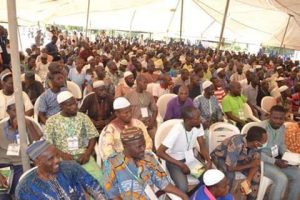 “Camps are usually avenues to seclude oneself away from sins and witness tremendous changes in the level of one’s faith, understanding, exposure and of course, brotherhood.

However, do not forget to make a sound intention while going for the camping programmes. This is very essential, since all our activities must be in accordance with sound intention.”