The month of December, which is usually characterised by a number of holidays for school pupils and civil servants, is here again. This is perhaps, what distinguishes it from other months. From Christmas day to Boxing day to the gregorian New Year day, the month gives an avenue to people to get a long period of rest. Due to these holidays presented by the month, a number of Muslim groups have harnessed the benefit to stage beneficial events.

Muslim News can confirm that most Nigerian Muslims would not be sitting at home during the Yuletide. While some would head to camps, others are holding conferences, yet some others have scheduled symposia. We chronicle some of these events that Muslims; irrespective of their identities or ideological leanings, would leave the comfort of their homes for. 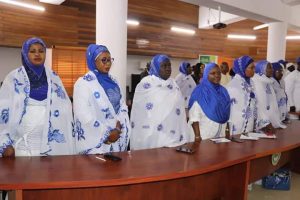 The Conference would bring together, Leaders of the the society, stakeholders in the country, members of NASFAT from over 300 branches in Nigeria, Ghana, Cote de Voire, Egypt , United Kingdom, Malaysia, United States of America among others to discuss progress of the society and Nigeria at large.

For the B-Zone of Muslim Students Society of Nigeria (MSSN), the theme for its 108th IVC is The Unification. The program will hold at its Permanent Site, Ibadan-Lagos Expressway, Ogun State. For the delegates from Edo/Delta, Ambrose Ali University, Ekpoma is the venue while delegates in Rivers State will be using City Model College, Port Harcourt. Camp officially opens on Sunday, December 22.

The annual Islamic Vacation Course, Muslim News gathered, is for kids and students in primary, secondary and tertiary schools. Working class Muslims – Males and Females are expected to attend the camp which ends on the 1st of January, 2020.

There is also a similar camping programme going on in the Northern part of Nigeria for Muslim students who fall under the A Zone. The theme is, Combating Socio-Economic Challenges facing Nigeria: The Role of MSSN. It will be holding simultaneously at Government Technical College (GTC), Ungogo (for males) and Government Girls College (formerly WTC) (female), both in Kano State. 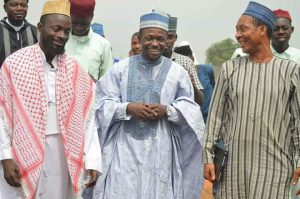 The Lagos State Area Unit of the society, would hold her 108th Islamic Vacation Course themed: ‘The Deception‘, from 22nd – 27th December, 2019 (for Secondary Schools) and 27th December – 1st January, 2020 (for undergraduates and others) at its expansive Human Capital Development Centre, Noforija, Epe, Lagos.

Two leading faith-based non-governmental organisations, the Guild of Muslim Professionals (GMP) and the Muslim Public Affairs Centre (MPAC) Nigeria are combining strength and resources to hold a ground breaking national convention to interrogate the direction of the world in the next 30 years.

The theme of the convention holds in Lagos between 25th and 26th of December at the Academic Guest House and Events Hall, Ikeja, Lagos on the topic, “The World by 2050: How Ready Are We?” Time is 9am to 6:30pm daily. 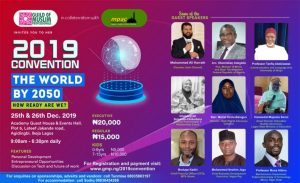 Members of The Muslim Congress (TMC), in their thousands, are beginning to arrive venues of the 2019 National Islamic Training Programme (NITP) holding simultaneously in four zones across different states of the Federation.

The NITP, with the theme, “The Muslim Family: Fortifying the structure” began on Friday, 20th December 2019, and is expected to end on Wednesday, 25th December 2019 at the aforementioned venues. 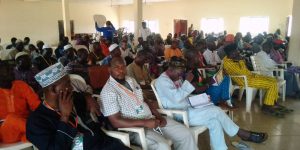 For the Southwest Zone 1 (Lagos and Ogun), the venue is Vanguards Academy, Odonsengolu, Ijebu Ode. Ogun state. While Oyo, Kwara, Osun and Ondo states, which form the Southwest Zone II, will be gathering at the Muslim Comprehensive Government College, Ilesha, Osun State.

Students of knowledge and scholars across Nigeria and beyond would assemble at the Daru Naim Central Mosque, Isheri Odofin, Lagos, for the 2019 annual Islamic Conference with the theme, Towards a deeper understanding of Islam in the contemporary world. 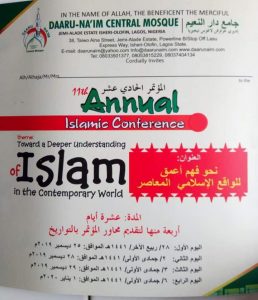 Members of the Nigerian Salafiyyah group in Lagos will once again converge at the Lagos State Secretariat Mosque Hall, Ikeja, for the 2019 edition of its annual Knowledge Builder Course 66 (KBC).

Packaged by Deen Communications Limited, the three-day Islamic awareness course will start on December 25 to 27 with the theme, Rights and Manners.

During the programme, lectures will hold from 9am to 4pm, with Abu Naasir Ibrahim Abdur-Rauf as the main lecturer.

Findings by Muslim News shows that some salafiyyah groups are also organising similar programmes, which is contrary to their previously held beliefs and proclamations that camping or religious gatherings during the December period is haram (forbidden).

President Muhammadu Buhari, the Speaker of the House of Representatives, Rt Hon Femi Gbajabiamila, the Governor of Ogun State, Mr Dapo Abiodun and a host of other dignitaries are expected to grace the 2019 Annual ‘Jalsa Salana’ Islamic Conference organised by the Ahmadiyyah Muslim Jama’at of Nigeria. 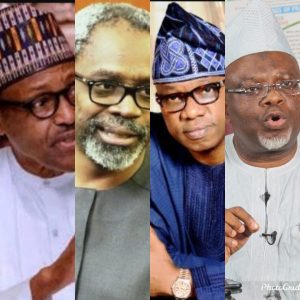 Also billed to attend the conference scheduled to hold between the 20th and 22nd of December in Ilaro, Ogun State are, the Executive Governor of the State of Osun, Alhaji Isiaq Oyetola; the Deputy Governor of Lagos State, Mr Obafemi Hamzat and his counterpart in Ogun State, Alhaja Naimat Salako.

Speaking at his maiden press conference to herald the conference, the newly elected Amir of the Ahmadiyyah Jama’at, Barrister Abdul Azeez Folorunso Alatoye said the conference will focus on the Holy Quran Chapter 16 verse 126, which reads; “Call unto the way of thy Lord with wisdom and goodly exhortation, and argue with them in a way that is best. Surely, thy Lord knows best who has strayed from His way, and He knows those who are rightly guided”.

The Jamma’atu Tabligh members aren’t left behind as they will be holding their annual Ijtima’h Conference at different zones in Nigeria between December 26 and 29, 2019.

For the forthcoming camping exercise, Muslim News learnt that two zones in Lagos will be merging and converging at the jamma’ah’s permanent site in Oko Afọ́, Badagry Express Way, a riverine wide expanse of land about 30/40 hectares of land. 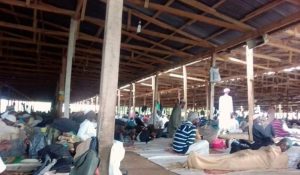 Abeokuta jamma’ah also has a permanent site on 50 hectares. The recently held Ogun State Ijtima’h in Ijebu was also done on the 50 hectares of land purchased by the Ijebu jamma’ah.

The main purpose of the Ijtima’h, we were reliably informed, is to send jamma’ah on outings (ìjáde).

Ogun Ijtima’h for instance sent about 157 jamma’ah on outings within and outside the country. Each jamma’ah is usually made up of 6-7 members.

One of the foremost Muslim women organisations in Nigeria, Al-Mu’minaat (The Believing Women) Organisation’s, has concluded all arrangements to hold her 25th National Al-Mu’minaat Training Forum (NATF) with the theme, The Mirage, from December 28, 2019 to January 1, 2020 at
Vanguards Academy, Odosengolu, Ijebu Ode, Ogun State for Ijebu Zone. 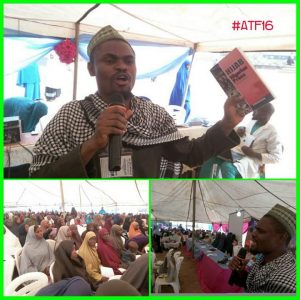 The 2019 edition of Katibah of Movement for Islamic Culture Awareness (MICA), would hold at the NYSC camp, Iyana Ipaja, Lagos from December 23rd, 2019 to January 1st, 2020.

Themed: The Exceptional You, the Katibah will parade an array of motivational Muslim Speakers and prominent Islamic scholars including Imam Nojeem Jimoh, Dr Jubril Salaudeen, Mr Nasir Giwa, Hajia Rahmah Aderinoye, Hajia Mutiat Olagoke and a host of others. 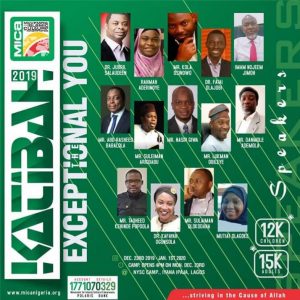 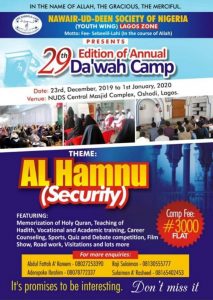 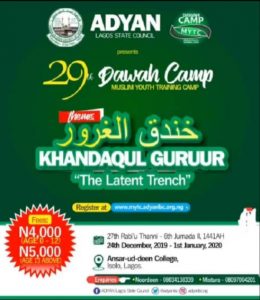 Theme: Disciples of the Perplexed World 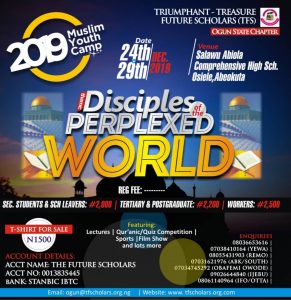 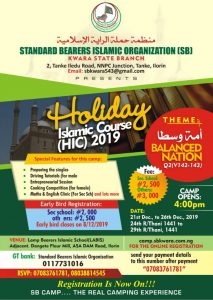 Theme: Disciples of the perplexed World 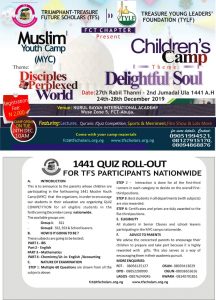 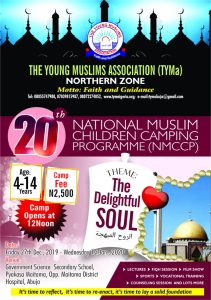 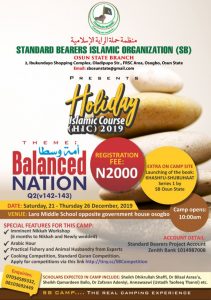 My Faith My Life 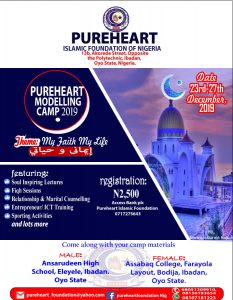