As part of efforts to bring succor to the less privileged, a Non-Governmental Organization, Rafeeqee Foundation has fed over 1000 poor and vulnerable Muslims across Nigeria in 2019.

A statement by the founder, Modinat Lawal-Famuditimi, in a statement made available to Muslim News, said the gesture was aimed at extending a hand of fellowship to the less privileged in the society.

She said the foundation which engages in numerous Sadaqa projects, partnered with local mosques in the region to feed the poor during the year and hopes to do more in the coming year. 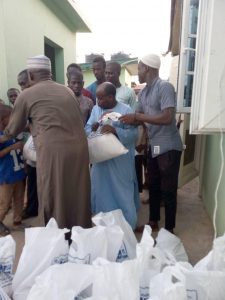 “One of our major projects is the Ramadan Feed the Poor Program. The foundation partnered with several Chief Imams of Central Mosques and suburban Masjids that in turned worked with Masjids within their community to identify poor people that meet the requirements of getting Ramadan Food,” it said.

She also said the foundation also aims at helping struggling Muslims to be better by implementing the Qur’an, Hadiths, and Sunnah in their day to day lives.

It further called on Muslims to be more engaged in their places of worship adding that the “traditional role of a Central Mosque is to help in building the community to maintain its Islamic, Spiritual, financial and educational values. 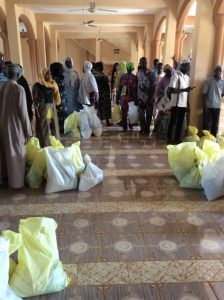 “The masjid should be more than a place where they offer Solaat. They also read the Qur’aan, share and provide Zakat, Sadaqa, tend to community events and affairs amongst others.

Speaking further, Hajiah Lawal-Famuditimi, said, “If you go from one Central Mosque in Nigeria to the other, they can barely carry out their financial obligations to run the Masjid. As it’s tough for them to run the Central mosque, it’s even tougher to tend to the needs of the community at large.

“With the current economic situation in Nigeria, Central mosques ought to be the place to go for financial support in regards to sadaqa, zakaatul Maul and Fitri, but most Central masjids are lacking in providing services that they were originally intended to serve.

“The work of empowering Central Mosques in Nigeria as a whole falls on every Muslim, home and abroad,” the statement added.

Rafeeqee is an Islamic nonprofit foundation registered in the US, which focuses on helping people to the right path of Islam.