by admin
in Middle East, News
1

“Martyrdom was the reward for his ceaseless efforts in all these years,” Khamenei said on his Twitter account in reference to Qassem Soleimani’s death.

The Iranian leader also declared three days of mourning in the country.

“With him gone, God willing, his work and his path will not be stopped, but severe revenge awaits the criminals who bloodied their foul hands with his blood and other martyrs’ in last night’s incident.”

“All enemies should know that the jihad of resistance will continue with a doubled motivation, and a definite victory awaits the fighters in the holy war,” Khamenei said in a statement telecast by the state TV.

“Soleimani’s martyrdom will make Iran more decisive to resist America’s expansionism and to defend our Islamic values. With no doubt, Iran and other freedom-seeking countries in the region will take his revenge,” said Rouhani in a statement. 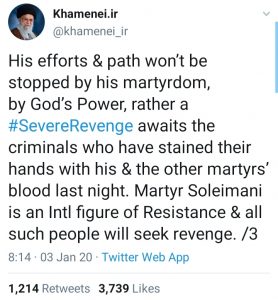 Iran’s foreign minister also slammed the killing of Qassem Soleimani and called it a dangerous escalation. The minister also warned that the United States would bear responsibility for the consequences.

“The US’ act of international terrorism, targeting and assassinating General Soleimani… is extremely dangerous and a foolish escalation,” Mohammad Javad Zarif wrote on Twitter.

“The US bears responsibility for all consequences of its rogue adventurism,” he added.

The killing of powerful Iranian military leader Qassem Soleimani is all set to become another flashpoint between the Middle East nation and the US. The move is bound to escalate tensions as US continues to back the move to kill Soleimani while Iran plots revenge.

Iran has been locked in a long conflict with the United States that escalated sharply last week with an attack on the US embassy in Iraq by pro-Iranian militiamen following a US air raid on the Kataib Hezbollah militia, founded by Muhandis.

“At the direction of the President, the US military has taken decisive defensive action to protect US personnel abroad by killing Qassem Soleimani, the Pentagon said in a statement.

“This strike was aimed at deterring future Iranian attack plans,” it added.