Meet the Nigerian Muslim that built an Android App that tells time in Arabic, Athkar reminder and Ibaadah to do in a particular time.

Yusuf Jimoh Aweda is a Network and Software Engineer who has achieved admirable technology space for himself including being a Microsoft Certified Professional. He has recently launched Ibaadah Kit App, an android app that tells time in Arabic, Athkar reminder and Ibaadah to do in a particular time.

Yusuf is a Physics and Electronics graduate from the prestigious University of Lagos, Akoka Nigeria. Prior to his University adventure, he had studied Electrical Engineering from the Polytechnic Ibadan, and now a Senior Software Developer and Instructor at Techvarsity Nigeria.

The inspiration to create the app
according to him was to reconnect Muslims to the consciousness of Allah while using their phones on the social media or internet as a whole because the modern expanding world of internet and social media have begum to get people’s attention than their purpose in life.

He believes people sometimes completely forget dhikr( remembrance of Allah) and other Ibaadah when using the phone on the social media. The app does dhikr, remembrance of Allah every 30 minutes, and the user is meant to repeat the dhikr after the app does. It detects time and translates it in Arabic. The app is also intelligent to determine moment of time to advise the Ibaadah users should do or prepare for with hadith evidence. You can also choose from the color themes for app customization.
The app is already on the play
https://play.google.com/store/apps/details?id=com.app.ibaadahkitapp

Benefit to the Muslims: 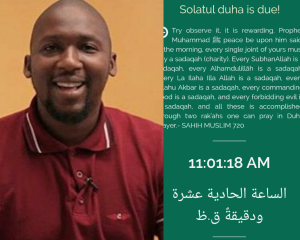 It would also encourage Muslims to reconnect with Allah and do athkar often while online with their phones. It guides Muslims to a particular Ibaadah to do with respect to time.

In the exclusive interview, he advises Muslim young people to endeavour advance their knowledge in software development and programming so that they can begin to solve the problems of this Ummah using ICT and to contribute to humanity in general to further project the peacefulness Islam stands for.

Tags: AllahDhikrIbaadah Kit AppMeet the Nigerian Muslim that built an Android App that tells time in Arabic and Ibaadah to do in a particular time.MuslimsSoftware